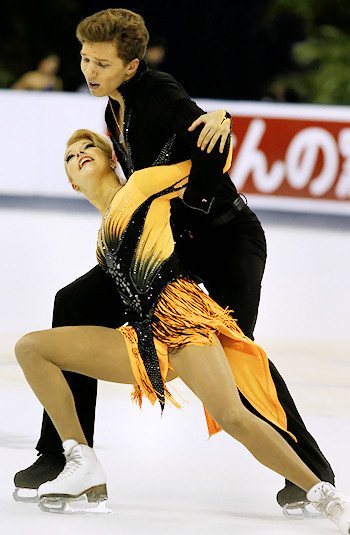 Ekaterina Bobrova and Dmitri Soloviev of Russia perform to a Samba and Rhumba for their Latin Short Dance.

Russia’s European silver medallists Ekaterina Bobrova and Dmitri Soloviev secured a surprisingly strong lead over World bronze medallists Maia Shibutani and Alex Shibutani (USA) in the short dance as the Cup of China kicked off Friday in Shanghai. Penny Coomes and Nicholas Buckland of Great Britain sit in third before the free dance on Saturday.

Bobrova and Soloviev chose a Samba and Rhumba for their Latin short dance. They maintained good speed throughout and their Rhumba sequences both looked confident. The Muscovites earned a level three for them as well as for the side by side footwork. They also twizzled in both directions on one foot, which was worth a level four. Bobrova and Soloviev scored 65.73 points, almost eight points more than the Shibutanis.

“It wasn’t our best performance as we had some upsetting little mistakes,” said Soloviev, “for example right before the step sequence. Emotionally it felt good and overall we are quite pleased.”

“We skated in the second group and the ice wasn’t so good anymore,” added Bobrova. “I was doing a knee-slide and he was supposed to pull me, but he couldn’t and I almost touched down with my hand which would have been a deduction. Luckily I managed to avoid it.”

The Shibutanis performed to a Samba, but didn’t go all out. Their twizzles were excellent as usual, and the solid Rhumba merited a level three, but the circular steps were a level two and the shortened rotational lift at the end just a level one. The siblings received 57.79 points.

“We are very pleased with our performance today,” Maia Shibutani noted. “It was a good start for us. We are really happy with that performance level. We feel we’ve improved on that since Finlandia (Trophy). We didn’t get a couple of our levels, we had a level one on our lift, but we know we can improve.”

Coomes and Buckland’s seized their chance in Shanghai with a clean skate to Rhumba and Cha Cha. Their rotational lift when he whirled her around effortlessly was a highlight of the program and the team has improved their performance skills and connection with each other. The students of Evgeni Platov scored 53.89 points.

“We are very pleased with our performance today,” said Buckland. “We set out to have some fun actually and we achieved that today. Obviously there are things we can improve on. We can take positive feelings from this performance and we look forward to the Free Dance tomorrow which we love to do.”

Buckland is coming back from an ankle sprain that put him off the ice for two to three weeks.

“Luckily enough we did a competition in England just before that, so all the programs were fully ready. We missed out a bit of training but it didn’t set us back at all,” he explained.

Pernelle Carron and Lloyd Jones of France had eyed that third place as well, but they are not far behind with 52.41 points. They were stylish in their Mambo and Rhumba, and had the third-best component score, but lost a few levels. The twizzles were a level three and the second Rhumba a level one as they didn’t hit the key points.

Two U.S. teams are at the bottom of the field. The brand new team of Emily Samuelson and Todd Gilles was out of sync on the twizzles and got a level one for the side by side footwork in their very first competition together. They picked up 43.64 points.

“It felt pretty good, all things considered,” said Gilles. “We’re both pretty experienced on the Grand Prix. We’re just happy to be here.”

The Americans had teamed up at the end of August.

“We tried out in the middle of August in Lake Placid and we continued sort of training by ourselves until the end of August,” Samuelson shared. “Then we went to Colorado to get choreography. We’ve been training these programs for about a month. The progress that we’ve made I can even feel myself is tremendous in the short time we’ve been working. We’re actually excited to have some more time to train.”

Charlotte Lichtman and Dean Copely’s debut at the senior Grand Prix didn’t go as well as they had hoped. Copely stumbled in the side by side footwork and their cautious looking Rhumba was graded a level one. The World Junior bronze medallists are currently ranked eighth and last with 40.26 points.