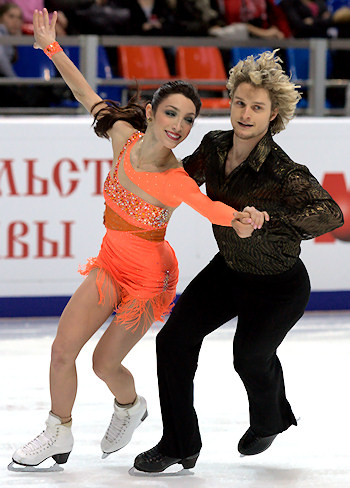 The Short Dance was the final event of the first day at the Rostelecom Cup, but the conclusion of the competition was not quite as flawless as one might have expected from an ice dancing event. A number of leading teams made visible mistakes and only two out of seven teams received level four for one of the series of Rhumba patterns.

“The thing about Rhumba is that it has a pretty unique step,” explained Marina Zueva, the coach of the reigning Olympic and World Champions. “This wide-stepped choctaw is not used anywhere else expect for this dance. It is a very precise step which has to be done according to all the requirements and yet, it is a step people do not usually work on. It is not an basic step like a three turn – not even a complex one like a twizzle – which you work with on a daily basics for years. This is something you have to work on separately. So the mistakes are understandable.”

Zueva’s best team in the event, USA’s Meryl Davis and Charlie White received level three for both sequences (only one other team avoided getting level 2), but it was not the most obvious problem in their dance.

The most glaring issue was a stumble by White right at the beginning of the dance which had his partner skating way away from him, and brought on the flashback of the disastrous performance the skaters had at the 2008 Cup of Russia in the original dance where White fell three times. This time around there were no such problems: they quickly caught up with each other and proceeded with their dance without a glitch.

“My blade got caught in the ice as I was turning a corner,” explained White. “It is just one of those things which happens sometimes. But I have to say that I am proud of how well we have recovered from it, of how Meryl just kept going. It is not easy to skate a program flawlessly each time, but it is much harder to continue after such a setback – even if it was just a fluke.”

The World Champions were fast and entertaining, and captured the Latin dance upper body movement pretty well. They received 69.94 points to lead the field by 5.5 points before the free dance.

“After Skate America we kept working on the dance,” said Davis. “We mostly focused on the musical aspect, on expressing the character. I think the dance is getting better.”

The team does not believe that winning the World Figure Skating Championship title has drastically changed anything in their lives.

“We have always shared the same philosophy regarding skating,” said Davis. “We love what we are doing, and with each new success, we are getting more confident. We have worked hard for it, but ultimately I do not think it has changed anything. We are just evolving.”

“I always enjoy performing in Russia,” added Davis. “The audience is very warm here and I feel very comfortable skating here. Sometimes we feel a certain connection to Russia because Marina and Igor often tell us about the education in Russia, of what they have been taught in their days, and how they have been taught. So we have some basic idea of what it is like to be a skater in Russia.”

Canadians Kaitlyn Weaver and Andrew Poje upset home favorites Ekaterina Bobrova and Dmitri Soloviev of Russia to finish second in the short dance. The students of Angelika Krylova delivered a strong and sensual rhumba in combination with an upbeat and fast-paced samba, and posted the new season best of 64.45 points. They were one of the two teams to get a level four for the pattern sequence.

“It was not our best performance,” said Weaver. “At least not if compared to how we skate this dance in practice. But it was better than at the NHK Trophy and technically stronger than at Skate Canada, so we are satisfied. We felt like we had to hold it together in some places, and I think that’s just a stepping stone building to make this program become automatic.”

“It is great to perform in Russia,” she added. “The first time for us was the last year World Championships and we a have great memory of the event. We had been skating very well all week long, and it was a pleasure to perform in front of the audience who has so much passion and knowledge about the sport. So we were very excited to come here for a Grand Prix event.”

Bobrova and Soloviev once again struggled with side by side twizzles which received only level three.

“I had done only three rotations on the second one,” admitted Soloviev. “Basically, the change of edge coming into it was not good enough.”

In addition both their Rhumba sequences were rated only level two. They scored only 61.69 points, a sharp drop from the 65.73 they had in Shanghai.

“I believe emotionally it was much better than at the Cup of China,” said Soloviev. “Technically, however, it was not good enough. Maybe not enough fine-tuning. We will keep working and keep getting better and hopefully by the time of the Grand Prix Final, we will be able to combine this emotional level with the technical one we had in China and show you the full picture.”

“I believe we understand the dance better and better with each practice,” added Bobrova. “We enjoy skating it more and more. We have spent a lot of time working on it on the floor with ballroom dancers, but recently we had to give it up to focus more on the on-ice training.”

Teammates Ekaterina Riazanova and Ilia Tkachenko finished fourth with 55.83 points. Dressed in all black with hardly any decoration, the students of Alexei Gorshkov stood out among the more colorful competitors. Their somber and understated interpretation of the Rhumba was also slightly different to what everyone else was doing. They team received level four for one of the sequences, but only got level two for the non-touching step sequence.