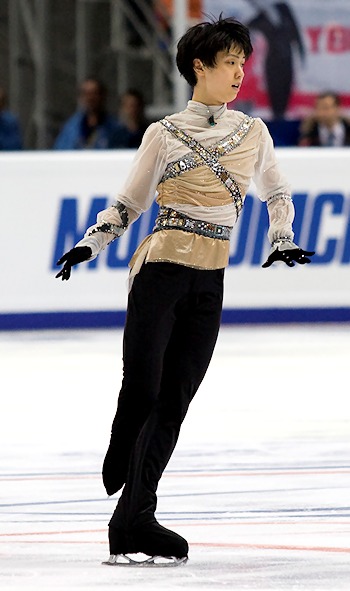 Yuzuru Hanyu of Japan performs to music from the "Romeo and Juliet" soundtrack by Craig Armstrong.

The Men’s event was the most intriguing one at the final stage of the ISU Grand Prix of Figure Skating Series in Moscow, Russia. Depending on the relative placement of the top competitors, several skaters had a chance to join Michal Brezina in the Final.

How things would pan out was not clear until the very last performance, but in the end, the situation resolved itself to everyone’s satisfaction. All three medalists – Yuzuru Hanyu (JPN), Javier Fernandez (ESP), and Jeremy Abbott (USA) – will be making a trip to Canada in two weeks.

Hanyu, who was in the toughest position of needing a victory to qualify, was able to do precisely that. He was not flawless, however, as he once again fell out of a quad toe loop landing and had a fall during the circular step sequence.

Nevertheless, the 16-year-old proved that he truly belongs to the ranks of the top Senior skaters. Never allowing the mistakes to throw him off, he nailed all other jumping passes, including two powerful triple Axels. The passion he pours into his interpretation of Romeo and Juliet, as well as the effortless flow he maintains over the ice, would have been remarkable even in a more seasoned competitor.

“I am very tired right now,” admitted the two-time Japanese junior national champion at the press conference, “but I am also very happy to earn such a good result for Japan.”

Hanyu also had a bit of sport luck on his side that evening as he finished second in the free skating, but was able to edge Fernandez for victory by 0.03 points.

“I am a bit overwhelmed right now,” he said about qualifying for the Final for the first time in his career. “I have not yet realized what I have achieved, but I am confident that I will do my best in the Final.”

Fernandez delivered the most ambitious program of the evening to become the first ever Spanish skater to advance to the Final. He opened his routine to a medley of Verdi’s operas with a strong quad toe loop, followed by quad Salchow and triple Axel – triple toe loop combination. He went on to land a slightly flawed second triple Axel, however, the rest of the routine was hit-and-miss. He won the free skating (163.13), and with a total score of 241.63 points, rose from fourth to second overall.

“I am very happy with the way I have skated today,” said the student of Brian Orser. “It is my second Grand Prix medal. I have been working towards such results all my life. I think I did a great job. There were some mistakes, but I will simply keep working to make sure they won’t happen again. Congratulations to Yuzuru, who did a great job. I am very excited to be the first Spanish skater in the Grand Prix Final. In two weeks time I hope to skate the best I can.”

The 20-year-old felt that he benefited a lot from his move to Canada.

“I have to say that I am very happy with my decision,” he explained. “There were a lot of changes to my training regiment. We are working really hard, and we are working on different aspects like the program component scores and spins. Things are finally starting to work well in competition. I am very happy to be there.”

Both the skater and the coach were asked to comment on similarities between the style Fernandez displays right now and the one which was typical for Orser in his competitive days.

“I am very flattered by the comparison for he is a great skater,” said the 1987 World Champion. “I am 30 years older than him and I am flattered that people still remember me. However, I have to say that our goal is to develop his own skating style.”

“Lots of people point it out to me,” admitted Fernandez, “but I doubt that my coach’s goal is to make me look like him. I guess part of the reason is that I am working with David Wilson who has been working with Brian for years. Or may be I am just watching him skate and picking some things up.”

Overnight leader Jeremy Abbott slipped to third place (229.08) after finishing fifth in the free skating. He fell on an underrotated quad toe loop in the beginning of the program and later on his second triple Axel. He also cut his right palm, which he didn’t notice until later in the program.

“I have no words right now,” said the student of Yuko Sato. “I am happy that I qualified for the Grand Prix Final and I would like to congratulate the two other skaters here on doing such a good job.”

“I am not sure when I cut my hand,” Abbott said. “It must have been on a quad or at an Axel. I just know that towards the end of the program, I looked down and my whole hand was covered in blood. When I did my straight line step, there is a stop and I put my hand on the ice and when I pulled my hand back I left a smear of blood behind me. Definitely I put sweat, blood, and tears into the sport.”

“All in all, it was a rather poignant at the moment,” he joked.

When asked to elaborate, he explained: “I did not mean that it was suitable for the program as a whole, but rather to this specific point of this performance. The theme of the program is about a bird flying, spreading its wings, but today I was more like a bird which was shot down.”

The two-time U.S. national champion said that the fall on the opening jump did not affect the rest of the performance, but the second mistake did.

“After I fell on the quad toe loop, I pulled myself together and was able to get right back into the program,” Abbott explained. “However, I was rather shaken after the fall on the second triple Axel. I could not quite get back into the rhythm of the program. I was not comfortable.”

Comfortable or not, the skater still displayed total command over all his moves, and while it was preceded by two strong performances by Fernandez and Hanyu, it stood out on its overall quality and the level of the details.

Abbott is involved in choreography of his programs.

“There was quite a lot of my input in this one,” revealed the 26-year-old, who performs to Exogenesis: Symphony, Part 3 by Muse. “I would say there is a 50/50 division between me and Yuko [Sato]. We had first put the program together and then we went to Toronto to work with Robert Campanella, who took what we did and expanded it, made it bigger. I believe it is easier to skate if you take part in the choreography, because the movements come naturally. Unfortunately, you need more than that for a competition.”

This sentiment was, most likely, shared by Michal Brezina, who slipped to fourth place overall (226.35). The Czech started strong with a triple Axel, triple-triple combination and slightly flawed quad salchow, but made a lot of mistakes later in the program. Still, his routine to The Untouchables soundtrack was rather entertaining and the skater, who had already secured a place in the Final before coming to Moscow, will soon have a chance to redeem himself.