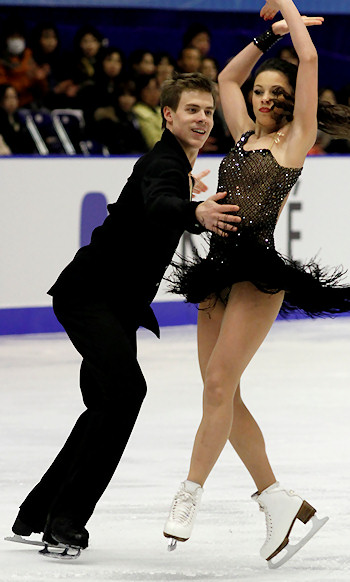 Elena Ilinykh and Nikita Katsalapov of Russia grabbed a narrow lead over Kaitlyn Weaver and Andrew Poje of Canada and USA’s Maia Shibutani and Alex Shibutani in the short dance at NHK Trophy on Friday.

The young Russian couple convinced in their characteristic interpretation of their Latin dance set to HipHip, ChinChin,  Mas que nada, and Mujer Latina. The twizzles and the rotational lift merited a level four while the circular steps were a level three. The 2010 World Junior Champions showed good unison on the Rhumba, but only hit one key-point in each pattern to earn 61.83 points.

“It was amazing to skate today, even though we were a little bit sleepy because there is an eight-hour time difference to Moscow,” Katsalapov said.

“This is our first event of the season, and we are so excited to be back in Japan, added Ilinykh. “It makes us to work harder when we see Meryl Davis and Charlie White and Tessa Virtue and Scott Moir. We wanted to start our season as early as possible and it was hard to to wait [to compete].”

Weaver and Poje started well into their expressive program to the well-known Rhumba piece Historia de un amor and the Samba Batacuda. The Skate Canada silver medallists produced a strong Rhumba, picking up a level-four for one sequence, but then he was shaky on the twizzles and she had a small stumble in the side by side circular footwork. Subsequently, the twizzles were graded a level three and the circular steps a level two. The Canadians scored 60.07 points, about three points below their seasons best.

“It wasn’t our sharpest skate today,” admitted Weaver. “We lost several technical levels, but it is just a stepping stone. It is still very early and we are not worried because we have a great free dance to perform tomorrow.

“We might have had more spark,” Weaver added regarding Skate Canada, “but we achieved a few things here that we didn’t at Skate Canada. We got a level four for the first Rhumba and this is going to help us. We know that we can do it.”

Shibutani and Shibutani looked a more at ease with their Samba than in China last week. This time their rotational lift was a level four, however, it was too long and they received a deduction. The twizzles were a level four as well, but the side by side footwork merited only a level two. The World bronze medalists picked up a new seasons best with 59.02 points.

“We were pleased with our performance today,” said Maia Shibutani. “We feel that it was stronger than last week at Cup of China. In the few days we’ve had to train, I think we’ve made some good improvements and we’re looking forward to the free dance tomorrow. We know we’ve got a strong program.”

“We love our music and we love our program,” added her brother of the Short Dance. “It is a very different theme from last year.”

Nelli Zhiganshina and Alexander Gazsi came fourth with 55.69 points. The German Champions achieved the highest base value with a level three and four for the Rhumba, a level four for their rotational lift, and a level three for the circular steps and twizzles. However, Gazsi bumped into his partner at the exit of the twizzles which cost them a level, and they received a deduction for an extended lift.

“I love twizzles,” joked Gazsi joked. “Other than that we we got our levels. The lift was a little slow in the end, therefore we got the deduction.”

Lorenza Alessandrini and Simone Vaturi of Italy placed fifth at 54.37 points. The Italians earned a level four for the twizzles, the first Rhumba sequence, and the straight-line lift.

USA’s Lynn Kriengkrairut and Logan Guilietti-Schmitt produced a solid dance to come sixth at 50.81 points. Their lift stood out where he pulls her up on one leg and she performs a Biellmann position while upside down.