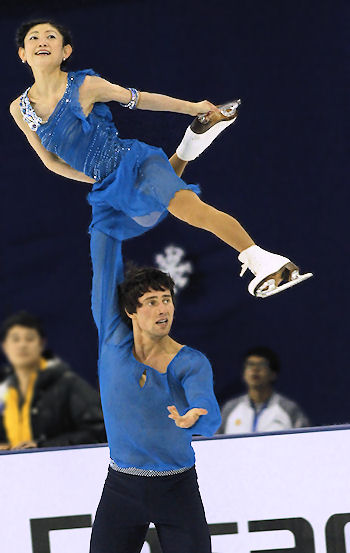 Yuko Kavaguti and Alexander Smirnov of Russia ended the golden streak of Chinese pairs at the Cup of China to take the title.

Yuko Kavaguti and Alexander Smirnov of Russia ended the golden streak of Chinese pairs at the Cup of China to take the title Saturday in Shanghai. Kavaguti and Smirnov are only the second non-Chinese team to win this event since it was introduced in 2003. Maria Petrova and Alexei Tikhonov of Russia won in 2005.

China’s Dan Zhang and Hao Zhang claimed the silver and the bronze went to Kirsten Moore-Towers and Dylan Moscovitch of Canada.

Kavaguti and Smirnov kept their lyrical Clair de Lune free from last season and delivered a smooth performance that featured a throw triple Salchow, level-four lifts, and a level four-side by side spin. Their triple twist was better than in the short program, however, Smirnov doubled the second jump in the triple toe-triple toe sequence while Kavaguti touched down on the throw triple loop. They ran out of time at the end of the program, having to cut short their pair combination spin. As a result, this element was only a level one. The 2010 European Figure Skating Champions scored 122.23 points which added up to 186.74 points.

“It was a good start for the next competition,” Kavaguti commented. “We kept our long because we really love this program and we didn’t compete so much last year. We polished the program and want to see it develop more.”

Zhang and Zhang’s Totentanz by Franz Liszt was a little rough around the edges. He wobbled on the triple toe-double toe-double toe combo and doubled the Salchow, while she fell on a triple Salchow. Dan Zhang also two-footed the throw triple Salchow, but the triple twist and throw triple loop were strong. Hao Zhang visibly tired towards the end and struggled with the last lift but managed to push through. Still, the multiple World medalists earned a season’s best of 117.10 to move up to second at 177.67 points.

“We did quite well today although we had some problems in the short program,” said Hao Zhang. “We were second at Skate America and here which means we can go to the Final and hopefully we’ll skate well there.”

In general, the team was pleased with how their comeback after a one year break due to injuries has been going so far.

“The audience hasn’t forgotten about us,” Dan Zhang commented. “They cheered for us and it is nice to be back competing.”

Moore-Towers and Moscovitch had a good chance to defend their second place after the short, but they made too many mistakes. She crashed on the second jump in their triple toe-triple toe sequence and also on the throw triple loop. In addition, she put her hand down on the throw triple Salchow. The side by side triple Salchow and the difficult lifts with unusual entries were definitely the highlights of their performance to Henry V. With 111.26 points, the Canadian Champions were ranked fourth in the free and dropped one spot to third at 172.04 points.

“Today wasn’t our strongest performance,” noted Moore-Towers. “We are a little bit disappointed with the silly mistakes that we made, but pleased that we could still attain enough points to keep our podium finish and have a chance to make the Final. We are definitely going to learn more from this skate than from a clean skate like at Skate America.”

USA’s Amanda Evora and Mark Ladwig moved up from fifth to fourth at 170.63 points. Their program to Daphnis and Chloe and Reverie had good flow and the music is just beautiful. The Americans impressed once again with their lifts, including a reverse lasso where he holds her high up above his head one one hand. The team hit a throw triple Lutz and loop, a double Axel-single loop-double Salchow combination, as well as a triple twist. They also picked up a level four for the two spins. The only error came when Evora fell on the side by side triple toe.

“I think we did an excellent debut of both programs,” said Evora. “We still left room for improvement, but we beat our personal best in both the short and long, and that’s all you can do at each competition. We raised the bar. We’re going in the right direction and I’m pleased to see that the judges and the technical panel think so, too.”

Wenjing Sui and Cong Han of China were unable to repeat last week’s success when they took the silver at Skate Canada. The two-time and reigning World Junior Champions slipped to fifth with 169.47 points. She fell on the exit of the quadruple twist – when he put her down she lost her balance and fell backwards while he stumbled forward. Seconds later she took a bad fall on the triple toe and later stepped out of a downgraded double Axel. The throw triple Salchow and flip were good and so were the lifts, especially the toe lasso. The quick turn around after Skate Canada and the two Junior Grand Prix events were maybe a little bit too much for this young team.