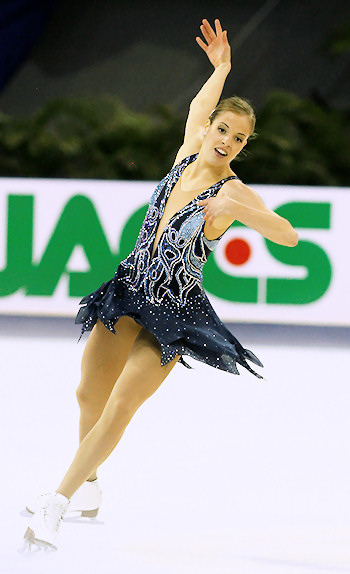 Carolina Kostner of Italy continued her successful start into the season by winning Cup of China on Saturday in Shanghai. She is also the first skater to book her ticket for the Grand Prix Final of Figure Skating.

Kostner’s win over former U.S. Champion Mirai Nagasu and World Junior Champion Adelina Sotnikova of Russia never was in danger. She improved her performance over her first event, Skate America, two weeks ago. The program to Wolfgang Amadeus Mozart’s Piano Concerto No. 23 – a piece rarely if ever used in skating – was a pleasure to watch and really showed off Kostner’s musicality.

The World bronze medallist completed five triples with the only glitch being a three-turn out of the last triple Salchow, and that she was unable to add a planned triple toe onto her triple flip after a shaky landing. The three-time European Champion achieved a new seasons best of 120.26 points and totaled 182.14 points.

“I am so relieved to make it to the Grand Prix Final,” the three-time European Champion said. “I’m doing three Grand Prixs because usually I struggle with consistency early in the season and I wanted to have an extra chance. The scores in this competition give me confidence that my programs have been accepted.”

Skating to the powerful Spartacus by Aram Khachaturian, Nagasu hit three clean triples, but underrotated both of her Lutzes which also got an edge call. Nevertheless, it was much better than at Skate Canada, and the 18-year-old got a season’s best with 112.26 points. Overall she accumulated 173.22 points.

“Coming off a bad skate at Skate Canada was very hard for me because I really wanted to make it to the Final this year,” said the 2011 Four Continents bronze medalist. “You might know that when I came to the Cup of China previously, I did very well in the short program and then dropped to fourth place. To break that curse is such a huge relief to me. Coming here and skating well, I’m just happy and ready for my next competition.”

Nagasu was her usual funny self when she was asked to comment on newcomer Adelina Sotnikova. “She is very talented, and in comparison, I feel like an old fart.”

Sotnikova landed a triple Lutz-triple loop combination right out of the gate in her lyrical program to Liebestraum, however, she received an edge call on the Lutz. The 15-year-old landed three more triples, but stumbled on both double Axels and popped the second Lutz. The World Junior Champion was ranked third in the free with 106.21 points, and won the bronze in her debut at the senior Grand Prix with 159.95 points.

“Overall, I am not so pleased with my performance today,” admitted the Russian champion, “but I am happy about the triple Lutz-triple loop combination that I did. Some other elements didn’t work out, and in my next competition I want to do everything as planned.”

“Third is a good result for my first Grand Prix and I will try my best to do better in the next event,” concluded the student of Elena Buianova. “For this season, I just want that everything is fine and thee other competitions will go well.”

Kexin Zhang of China finished fourth with 153.32 points in what was her first debut at the senior Grand Prix as well. The program was highlighted by a triple toe-triple toe combination.

USA’s Christina Gao recovered from a faulty short and pulled off a triple flip-triple toe to move up from eighth to fifth with 152.48 points.

Other skaters struggled. Kanako Murakami of Japan underrotated no less than four jumps to drop from fourth to sixth at 150.20 points. Russia’s Ksenia Makarova obviously is still affected by a hip injury and came seventh with 173.47 points. She took a hard fall on a cheated triple flip.