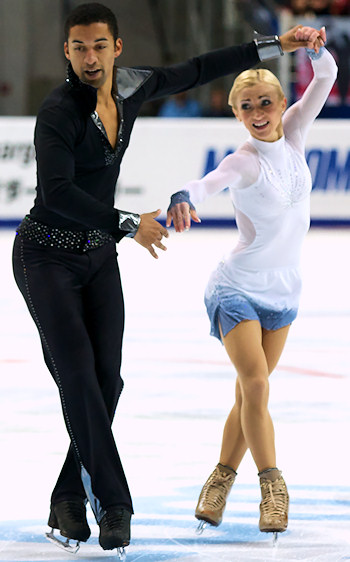 Germany’s Aljona Savchenko and Robin Szolkowy perform to music from the “Angels and Demons” soundtrack.

With two top teams having already secured a place in the Grand Prix Final of Figure Skating, the main intrigue of the Pairs Short Program was whether or not either Germany’s Aljona Savchenko and Robin Szolkowy or Russia’s Yuko Kavaguti and Alexander Smirnov would use this opportunity to try something new in a competition without much pressure.

Surprisingly, the Germans opted to play it safe and returned to the more familiar throw triple flip instead of the throw triple Axel.

“It was a last minute decision,” explained Savchenko of the throw triple Axel. “We had been working hard on it, but recently we did not have a lot of practice of doing it during the run-throughs. But it is getting better.”

Taking the cutting-edge element out allowed the skaters to focus on other elements and aspects of their program and resulted in the performance that earned them a new season’s best of 68.72 points.

“We are very happy with our performance,” confirmed Szolkowy. “As you might know, the last two competitions were not so good for us so it was the first clean performance of the season. Of course today we took out the throw triple Axel and went back to the throw triple flip which made the things a little bit easier.”

The choreography of their Angel and Demons routine was intricate as the fans have come to expect from the couple, however, the technical side was not quite as strong. The Germans got only level two for the step sequence and level three for the lift (Savchenko failed to grab her blade to reach a required difficult position). When asked the reason for skating better here than at the previous events, Szolkowy joked: “It’s the Moscow air. It just freshens you up!”

Kavaguti and Smirnov’s short program was almost equally strong. The Russians, who skated to Joe Satriani’s blues All Alone, let the flow of the music carry them throughout the intense and powerful performance. Artistically, the choice between two leaders was a matter of preference, however, the students of Tamara Moskvina once again failed to execute a triple twist flawlessly and lost two and a half points to their rivals on the technical mark to score 65.17.

“We are very happy to skate here,” said Smirnov afterwards. “It is the third event of the season for us and we have been very tired after the NHK Trophy. Over our entire career, we have always participated in the Grand Prix events in Russia, so we have decided not to break the existing tradition. I was a bit nervous today, but it was good to see so many familiar faces, to enjoy such a warm reception. I believe we did well. Yuko in particular has done a great job.”

When asked what made the difference to a less successful performance in Japan, Kavaguti joked, “The costume!”

Another excellent performance was delivered by the Italians Stefania Berton and Ondrej Hotarek who scored 60.12 to finish third. Skating to Harlem Nocturne and Demasiado Corazon, the skaters nailed arguably the best side-by-side triple toe loops of the night, but struggled with the catch on the triple twist. Still, the students of Franca Bianconi and Karel Fajfr were quite happy.

“I think we had a great skate today,” said Hotarek. “We have enjoyed everything: the ice rink, the crowd, the way we have skated. We have competed at this venue last year at the Cup of Russia and then at the World Championships, and it seems that we are skating better and better each time!”

“We are always happy to skate here,” added his partner. “We have skated better than at the two previous Grand Prix events which means that we are getting in shape.”

Two-time Russian Junior Champions Ksenia Stolbova and Fedor Klimov finished a distant fourth with 51.73 points. The team, whose preparations for the season were cut short by Stolbova’s illness, did not attempt a triple twist and made a mistake on a death spiral the second time in a row. Last week in Paris, Klimov fell while executing the element. This time he merely slipped, but was able to retain his balance. Still, the element didn’t meet the requirements and received zero points.

Remarkably, the newly minted Senior skaters have chosen the same music Ravel’s Bolero as did their counterpart in the Ladies event Adelina Sotnikova (albeit in a different arrangement). Just like her, they also have a rather complex choreography which already shows a lot of promise at the moment, and is likely to get even better as the season progresses.

“I made the same mistake as the last week,” admitted Klimov of the death spiral. “Nonetheless, our impressions from skating here are mostly positive. Had it not been for that mistake on the death spiral it would have been great. It is pleasant to receive such a warm welcome from the audience. It is very inspiring, so we would like to thank all the fans.”

Teammates Katarina Gerboldt and Alexander Enbert, who were considered to be the favorites to win a bronze based on their results last season, finished in seventh place with an error-ridden performance.