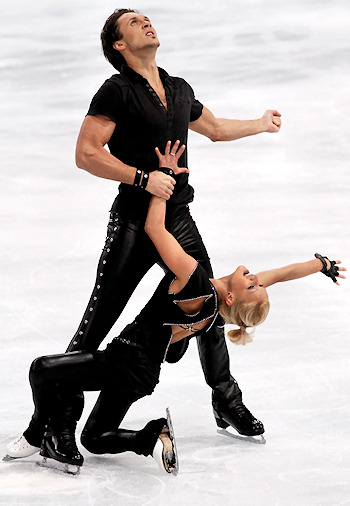 Russia's Tatiana Volosozhar and Maxim Trankov perform to Evanescence's "Bring Me Back to Life".

Tatiana Volosozhar and Maxim Trankov of Russia won the Pairs figure skating short program at Trophée Bompard in Paris on Friday, however, they were not at their best. Meagan Duhamel and Eric Radford of Canada were second with a solid skate, while Vera Bazarova and Yuri Larionov of Russia finished third.

Volosozhar and Trankov usually impress with their huge triple twist and it was big this time again, however, Volosozhar went down on the exit of the element. She had only seconds to recover from the unexpected fall as the triple toe came up right away, but she did it.

Unfortunately, the Ukrainian-born skater touched down with her hand on the throw triple flip, and the death spiral only garnered a level two. The World silver medalists scored 63.69 points for their program to Bring Me Back to Life by Evanescence – well below their season’s best from Skate Canada:

“We thought the competition was too boring and decided to do something funny,” joked Trankov. “The twist is our favorite element and we do it very well usually, but today something happened. We are happy that after this we were strong and did the triple toe.”

“We are not so disappointed. Tomorrow we will try to be stronger,” he added, explaining that the small difference in points to the Canadians will push them harder.

Duhamel and Radford trail the Russians by only 2.63 points. They put out a strong performance to Concierto de Aranjuez, reeling off triple twist, a triple Salchow, a throw triple flip, and four level-four elements. The Canadians picked up 61.06 points.

“Skate Canada was a great start and we were in the same position there as we are right now,” said Radford. “So we’re concentrating now on taking our skating forward and doing well tomorrow.”

“We were extremely nervous today before we went on the ice,” shared Duhamel. “It was a great skate considering how we felt. It’s pretty much how we skate every day at home.”

Duhamel admitted that they were nervous as the qualification for the Grand Prix Final is on the line for them.

Bazarova and Larionov’s short to Tosca included a triple toeloop, a high triple twist, and a difficult lift with many changes of positions, however, she  crashed on the throw triple flip.

Larionov was quick to take the blame for the fall. “Today I made an unfortunate mistake. I threw Vera too powerfully. She didn’t expect it and as a result, there was a fall.”

“Overall it was a good performance,” said Larionov. “We skated with emotions, used our hands, and expressed the music. We’ve worked hard on the choreography and presentation.”

USA’s Amanda Evora and Mark Ladwig are close to the podium with 57.69 points in fourth place. Evora underrotated the triple toe and fell, but the U.S. silver medalists produced a triple twist, throw triple loop, and a nice lift.

Jessica Dubé and Sebastien Wolfe of Canada showed improvement over Skate Canada with a solid skate (53.24 points). They replaced the triple flip with the triple Salchow as their solo jump, and both landed it cleanly. The team from Quebec also landed the throw triple Lutz and a double twist, however, the pair combination spin, the footwork, and the death spiral garnered only a level two.