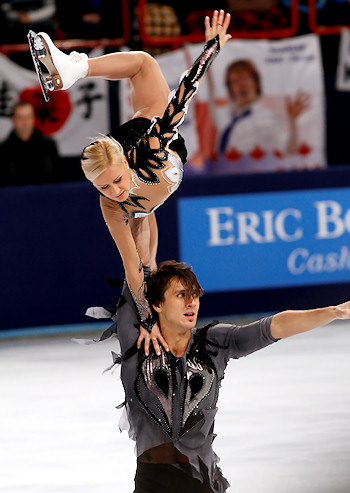 Russia's Tatiana Volosozhar and Maxim Trankov perform an overhead lift in their routine to "Black Swan".

Tatiana Volosozhar and Maxim Trankov of Russia won their second Grand Prix gold medal of their short career as a team Saturday at Trophée Bompard in Paris, France. Teammates Vera Bazarova and Yuri Larionov pulled up one spot to claim the silver medal, while Canada’s Meagan Duhamel and Eric Radford settled for the bronze.

Volosozhar and Trankov qualified for the Grand Prix Final of Figure Skating, and Duhamel and Radford have a good chance to qualify unless Stefania Berton and Ondrej Hotarek win the Cup of Russia next week. Bazarova and Larionov, however, didn’t make the Final as they only placed fifth at Skate America.

Volosozhar and Trankov were not perfect in their program to Black Swan. They opened with an unusual mistake, singling the twist, which is actually their signature element. The World silver medalists rallied back to land the side by side triple toe-double toe combination and triple Salchow, as well as a throw triple loop and level-four lifts. Volosozhar two-footed the throw triple Salchow. The Muscovites scored 130.44 points which added up to 194.13 points overall.

“Our performance wasn’t so perfect, and again we lost the twist,” noted Trankov. “I don’t know what happened. After this, we kept going well and did the jumps and a good throw in the second half of the program. We also got a level four for all the lifts, but we lost a level in the pair spin.”

Bazarova and Larionov were much improved over Skate America and even over their short program. Their program to Doctor Zhivago featured a triple toe, a high triple twist, throw triple flip, double Axel-double Axel sequence, and difficult lifts. The European bronze medalists earned a season’s best of 125.85 points and had 184.91 points overall.

“Finally we were able to put out a free skating without mistakes and so we are very satisfied with today’s performance,” stated Bazarova. “We were calmer than at Skate America and we are in a better shape now.”

Duhamel and Radford knew they were fighting for a spot in the Final and were nervous. Their routine to Viva la vida and Yellow by Coldplay included a triple twist, a triple Salchow, and five level-four elements, however, Duhamel missed the throw triple loop and both skaters stumbled badly on the last jump in heir their triple Lutz-double toe-double toe combination. The Canadians still had a season’s best of 115.56 points and finished third at 176.62 points.

Duhamel admitted that now they’ll sit nervously through the Cup of Russia while waiting to see if they make the Final or not.

USA’s Amanda Evora and Mark Ladwig remained in fourth place at 169.58 points after she underrotated the solo jumps and fell on the double Axel. While their pair elements, such as the throws an lifts, were really nice, their pair spins didn’t get a level as Ladwig accidentally lifted her up during the spin.

Canadians Jessica Dubé and Sébastien Wolfe placed fifth with 150.68 points. They hit a triple Salchow, throw triple loop, and throw triple Lutz, but ran out of steam at the end and aborted a lift.