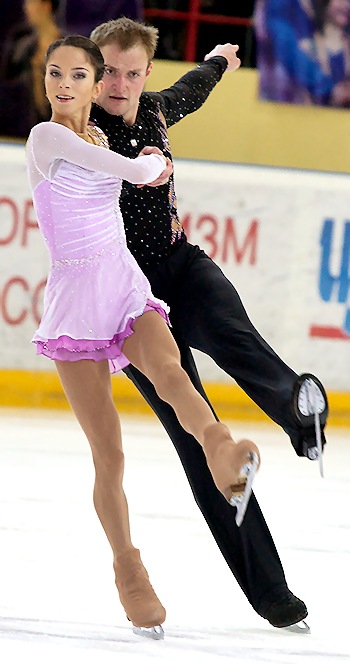 The withdrawal of the two leading pair skating teams – Tatiana Volosozhar/Maxim Trankov and Yuko Kavaguti /Alexander Smirnov (both due to injuries of the male partners) – left the field at the 2012 Russian National Figure Skating Championships wide open.

Last year’s bronze medalists Vera Bazarova and Yuri Larionov stepped up and captured the overnight lead, however, even though the lead itself is not a surprise, the manner in which the skaters achieved it was noteworthy. The favorites are unexpectedly followed by Anastasia Martiusheva/Alexei Rogonov and Ksenia Stolbova/Fedor Klimov.

Bazarova and Larionov relocated to Saransk at the end of the last season after their coach had received an offer to establish a pair skating school in the town. Despite it being a relatively recent occurrence, the local audience already feels a strong connection to the skaters and the reception they received was overwhelmingly loud. The team, who had a shaky start of the season, was up to the challenge.

The 2011 European bronze medalists didn’t miss a step during their routine to Puccini’s Tosca. Even the side-by-side toe loops, usually their weakest element, were confident and powerful today. All other elements, including a level three twist lift and throw triple flip, were equally strong and the team led the field by an eight-point margin with 66.83 (35.71/33.12) points. The only minor flaw in their routine was a level two on their death spiral.

“We are satisfied with our performance,” said Larionov. “We have reached the goals set for us by our coach, our choreographer, and ourselves. We have positive impressions.”

“We moved to Saransk half a year ago,” explained Bazarova. “We are very happy that the audience supported us so strongly today. We are very grateful to everyone who rooted for us. However, I have to say that today we have been focused on our performance. We did not allow anything to distract us from it.”

“We have tried very hard to focus on each other and the program,” agreed Larionov.

The favorites of the Championships said that they regret the withdrawal of Volosozhar/Trankov and Kavaguti/Smirnov.

“We have already been asked about it several times,” said Bazarova. “Frankly, it would have been much easier for us if one of those teams had taken part in the competition. We miss them.”

Skating to Vivaldi’s Four Seasons, Martiusheva and Rogonov upset a number of other strong competitors to finish second with 60.25 (32.19/28.06) points. The students of Natalia Pavlova have been struggling with consistency ever since their second-place finish at the 2009 World Junior Championships, often failing to land any jumps or throws in a program.

This time, however, the team (who won two minor international events this season – 2011 Warsaw Cup and 2011 Golden Spin of Zagreb) was finally able to live up to their potential. They began by nailing side-by-side triple Salchows and their only mistake was a hard landing of a throw triple flip, which forced Martiusheva to put a hand down on the ice. With nothing to distract from their clean lines and intricate choreography, their performance was easily one of the highlights of the event.

“Basically we skated our program clean,” said Rogonov. “We have done everything we have planned, albeit with minor mistakes. We could have done better, but I guess overall we have reached our goal.”

The skaters claim that they were not affected by a chance to win a medal.

“Personally, I was not affected by the withdrawals,” said Rogonov. “Our task here has been completely different. We just had to skate clean, show our best, and do something we have failed to do last year and the year before that. We have not really given any thought to what others were doing or not doing.”

“I believe that these two couples are out of our league right now,” agreed Martiusheva, “especially Volosozhar and Trankov. However, we have not entered this competition thinking that we could challenge for first, second, or third place. We just thought that we had to skate clean.”

“The less you think about the podium, the closer you are to it,” summed up her partner.

Stolbova and Klimov are also on a comeback track. The 2011 World Junior silver medalists barely had any time to prepare for their two Grand Prix events due to Stolbova’s illness. The team made a lot of mistakes in both Paris and Moscow, but in Saransk they delivered a powerful performance.

At this event, however, their routine to Bolero was only marred by a touchdown on the landing of the throw triple flip. Their solid and perfectly synchronized triple toe loops were the highlight of their routine, however, with only a double twist they started off with a lower base value than other contenders. The two-time Russian Junior champions are currently third with 58.64 (29.48/28.98) points.

“We are happy that even with the mistakes the program was strong and we received good scores,” said Klimov. “Of course, we could have skated much better.”

The skaters also believe that the withdrawal of the leaders did not affect their performance.

“If these teams did not withdraw, we would have hardly been able to challenge them,” admitted Klimov. “So for us nothing changed. Naturally, it is great that more places on the podium are left wide open. It is a lot of pressure as with time people will forget who did and did not take part in the event and only the final standings remain. I do not mean for us, personally, but rather in general. I guess you have to be realistic about your chances against such strong couples”.

Lubov Iliushechkina and Nodari Maisuradze drew the first starting number, however, as one of the favorites of the event, they failed to set high standards for the other teams. Iliushechkina fell out of the landing of an underrotated triple toe loop and two-footed the landing of the throw triple flip. The students of Natalia Pavlova also received only level one for their death spiral, and are currently fourth with 57.00 (27.45/29.55) points.

Another promising team from last season, Katarina Gerboldt and Alexander Enbert, also struggled with consistency. Gerboldt fell out of triple Salchow attempt and their triple twist ended up in a crash. The students of Tamara Moskvina are currently fifth with 56.67 (28.15/28.52) points.

“We made some minor mistakes,” claimed Gerboldt, “however, I believe that it was our best performance of the season so far. Unfortunately, I have been plagued with injuries this year. I am still bothered by some of them, but since we have decided to compete, we will. Right now we are not concerned with placements. We are more focused on overcoming all the obstacles, but we will still try to do our best tomorrow and challenge for a place on the national team.”

“We do not plan on reducing the difficulty of our program tomorrow,” added Enbert. “We will take the risk and go for everything.”