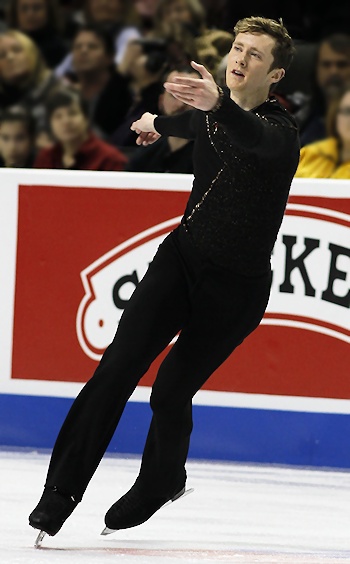 It was a mixed bag for the newly crowned U.S. Men’s champion at the 2012 U.S. Figure Skating Championships.

Jeremy Abbott, the 26-year-old from Aspen, Colo., was having perhaps the performance of his life in front of a packed house, while in the stands, his stepfather, Allen Scott, 64, was having a medical emergency.

Focused so completely on his performance, the three-time champion missed the melee that was just rows away from the ice.

“Before the medals ceremony, people kept telling me that I needed to call my mother,” he explained. “But I thought it was just her being her normal self, and just wanted to congratulate me.”

Abbott learned that shorted after his Exogenesis: Symphony program had started, that Scott blacked out and started convulsing.

“I spoke with my mom and learned that his heart rate is down and his blood pressure is up. He’s coherent now, and I was able to speak with him,” he said.

“Mom told me to stay put, but if anything changes, I will be at the hospital in a heartbeat.”

Abbott reported that at press time there was no further cause for concern.

The gold medalist opened his program with a strong statement in the form of a dandy of a quadruple toe loop jump, and captivated the audience with his subtle, yet captivating, choreography.

“Each time I’ve won (the national title), it’s been a different experience,” he said. “This time at the end of the program, I felt lucid and calm. I was able to take in the moment and the energy from the crowd. I got a little bit emotional.”

The 2009-10, and now 2012 champion earned the highest score by a man at the U.S. Championships, collecting 273.58 points in the competition. His lone miscue in the program was the doubling of an intended triple Salchow.

“It feels great to be a three-time national champion,” Abbott said with his crooked smile. “I perform like that in practice every day. The plan was to methodically improve from competition to competition, and I’ve been doing that.”

Abbott was named to the World Team, and will be joined by his training mate, 22-year-old Adam Rippon.

Rippon, a pre-competition favorite since he moved up to the senior level for the 2008-09 season, finally made good on all of the promise he has shown by winning the silver medal. This is Rippon’s first medal in four attempts at the U.S. Championships.

“It definitely wasn’t my best today,” said the two-time Junior World Champion, “but I fought for everything. I’m a changed skater. My whole mindset is different, my training is different, and I’m excited to finally see that pay off.”

The silver medalist opened by popping an intended quadruple Salchow into a double, but received credit for six triple jumps in his Air and Toccata & Fugue program.

“I’m capable of a lot more,” Rippon said confidently. “I hope to have the chance to show that in Nice.”

Last year’s bronze medalist, Ross Miner, defended his position on the podium, moving up from fourth after the short program.

“I’m very happy to be back here again,” the 21-year-old said. “The program wasn’t perfect, but I’m looking forward to continuing my season at the Four Continents Championships.”

Miner, who finished with 230.32 points, will join Abbott and Rippon in Colorado Springs in two weeks for the competition.

Armin Mahbanoozadeh, 20, finished in fourth place—his highest finish ever at the U.S. Championships since winning the novice title in 2007.

“A couple of small mistakes I think cost me a lot of points today,” he said, “but I’m happy to at least be on the podium.”