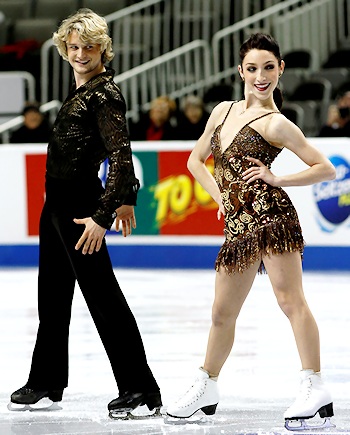 As expected, defending champions Meryl Davis and Charlie White took the lead after the short dance at the 2012 U.S. Figure Skating Championships, coming one step closer to a fourth consecutive title.

Their score of 76.89 points is the highest recorded this season, but it is of no concern to the World Champions.

“Each competition is different, so it’s hard to compare scores from one event to another,” White explained. “What we focus on is what we can control—competing to the best of our abilities, and see how things turn out from there.”

Skating to a rhumba/samba combination to Batacudas, Life is a Carnival, and On the Floor, Davis, 25, and White, 24, brought the Silicon Valley crowd to its feet, earning level fours on each element, save for the first rumba pattern.

The duo say that they haven’t changed their approach to skating since winning the first world title for the United States in ice dance.

“I think that the only thing that has changed is the way in which other people perceive us,” Davis shared.

“What is exciting here is that ice dancing is now being considered the major event at the U.S. Championships, and we are happy to be a part of that,” Davis added. “We’ve been competing at these championships since 2000, and that’s never been the case. We’re going to keep pushing to help keep improving the visibility of our sport.”

Teammates Maia Shibutani, 17, and Alex Shibutani, 20, finished in second place with a brand new short dance that they pulled together after the Grand Prix Final last month in Quebec City.

“We wanted something with an upbeat Latin vibe,” Alex said. “We worked with (Dancing with the Stars’ pro) Corky Ballas to improve our interpretation—he put us kind of through a boot camp, and we think this program flows much better and is more fun for us to perform.

The siblings earned level four on each of the program’s elements in their new program set to The Girl from Ipanema and  Samba de Janeiro. With 72.69 points, the Worlds bronze medalists are in great position to repeat as runners up to Davis and White.

Finishing in third place was the new team of Madison Hubbell, 20, and Zachary Donohue, 21, with 57.56 points. Their Latin medley short dance was smoking hot and sexy, but the duo still has some work to do in terms of leveling on their elements. Hubbell and Donohue finished with just one level four element—their straight-line lift.

“This is our first nationals together, obviously,” Hubbell said. “It was a strong program for us, and we fought for everything. It may not have been perfect, but it was a nice start.”

The Detroit-based team lead the way of a very tight group of six teams within six points of each other, setting up for an exciting finish to the free dance.