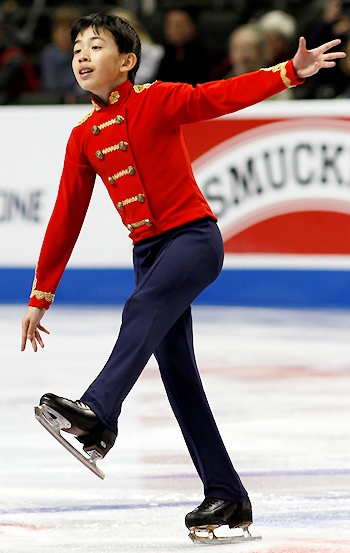 Vincent Zhou performs to the "Nut Rocker" by the Trans-Siberian Orchestra at the 2012 U.S. Figure Skating Championships.

The novice men lit up the HP Pavillion in San Jose, Calif., this afternoon at the 2012 U.S. Figure Skating Championships, and as an added bonus, the top two men are local skaters.

In the tradition of two-time novice men’s champion Nathan Chen, 11-year-old Vincent Zhou, the youngest in the competition, overcame his older counterparts to win the short program.

“It was really fun skating at my first big nationals,” said the Palo Alto, Calif., native. “I wanted to do well where I was born.”

“I was really happy about that,” he said with a grin.

“My component scores were the highest they have ever been,” Zhou said. “I must have lost some levels on my technical elements, though.”

Finishing in second place was another local, 14-year-old Kevin Shum, from nearby Piedmont, Calif., with 50.85 points.

“Skating in front of a hometown crowd made me nervous,” he admitted, “but I put myself into my comfort zone immediately and was able to perform well.”

Shum skated a seemingly relaxed program to Robert Longfield’s Vortex, and was proud to land his first triple Lutz in a short program.

“I’ve done it in the free before, and I was glad it worked in the short today.”

Nicholas Vrdoljak, 15, from Westmont, Ill., is in third place after a strong program to selections from Man in the Iron Mask.

“Like in the film, my program and costume represents two different people,” he said. “I tried my best today, and I did very well.”

Vrdoljak finished with 46.60 points in the competition.

The novice men’s medals will be determined on Monday afternoon.