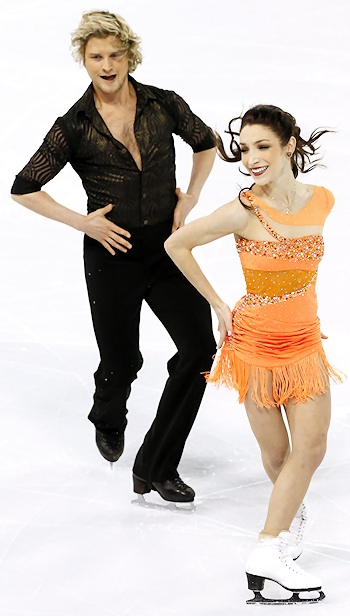 The rivalry between training mates Meryl Davis and Charlie White of the United States and Tessa Virtue and Scott Moir from Canada continued in Colorado Springs, Colo., today at the 2012 Four Continents Figure Skating Championships.

The Americans haven’t lost a competition since the 2010 World Championships in Turin, Italy. Davis and White eked out a victory in the short dance this afternoon at the Four Continents Championships.

“It felt really good,” White said. “Our levels weren’t what we wanted, but we’ll work on that.”

The Technical Specialist, Shae Zukiwsky, a former competitive ice dancer himself, was particularly hard on the leveling of the rhumba patterns for the competitors. Davis and White earned only a level three for each of their two patterns.

“It’s a little frustrating, that’s for sure,” Davis, 25, said in the post-event press conference. “It’s different for each team. For us, our rumba is a bit slower than the rest of our program and it’s in the characters we try to play. We’re certainly more focused in the rumba.”

White, 24, continued, “You can’t be mad at the callers. They were consistent throughout. From competition to competition the callers focus in on different things. After the competition we will figure out what exactly went wrong, but they are just doing their job.”

Davis and White earned 72.15 points for their samba/rhumba short dance, a mere .55 points ahead of Virtue and Moir.

The Canadian champions also suffered from lower than usual levels on the rhumba pattern, but were satisfied with their performance nevertheless. Moir, however, is not a fan of the rhumba compulsory, even if it is so important to his success this season.

Virtue, 22, and Moir, 24, earned 71.60 points with their samba/rhumba program, winning the component mark over Davis and White.

“This performance was a step up from what we’ve done so far this season,” Virtue pointed out. “We lost a little bit of momentum on the circular footwork until the end, but it’s definitely the path that we want to be on heading into Worlds.”

Canadian silver medalist Kaitlyn Weaver and Andrew Poje may be in the beginning stages of a little rivalry themselves. The duo outscored Worlds bronze medalists Maia Shibutani and Alex Shibutani by less than a point, and finished in third place in the short dance.

“We started out a little bit bobbly,” Weaver said, “but we forgot about that right away and were able to build on the program until the end.”

Like the teams ranked above them, Weaver, 22, and Poje, 24, struggled with the rhumba pattern, and in their case, only earned level twos.

“We really trained it after nationals,” Weaver said of the rhumba. “Every caller has a different objective, and it is our job to go home and cover all of the gray areas so that we leave no doubt that we’ve got it right.”

“With the rules being where they are with the rumba, we’re trying to bring excitement to the program,” added Poje. “Sometimes it might feel a little lackluster. We all try to portray our version of the rumba.”

Weaver and Poje scored 64.23 points for their rhumba/samba short dance.

Shibutani, 17, and Shibutani, 20, who used to train in Colorado Springs, seemed to have the crowd on their side with their sassy samba/rhumba short dance. Like the other competitors, Shibutani and Shibutani believe that the Technical Controller’s toughness will help them in the long run.

“I think it’s another good experience for us,” Alex said. “We want the judges to be tough because then we know what we have to work on when we get home and be ready for the World Championships.”

Finishing in fifth place were American bronze medalists Madison Hubbell, 20, and Zachary Donohue, 21, with 49.93 points. Despite a fall early on in the program by Donohue, the duo earned a new personal best and was one of just two teams to earn a level four for the rhumba pattern.

“It obviously was a pretty poor performance,” said Hubbell. “We really worked hard in the time that we had which was only a few days from nationals.”

“We felt like we made significant improvements on our short dance, and I think we displayed those in the practices,” she continued. “Unfortunately when we went out there today it didn’t click. We are going take today as today, rest tonight, and comeback and fight tomorrow. So we’ll look forward to the free dance.”

Canadians Alexandra Paul and Mitchell Islam finished in sixth place with 48.52 points, while Xiayang Yu and Chen Wang of China were seventh (45.52 points).