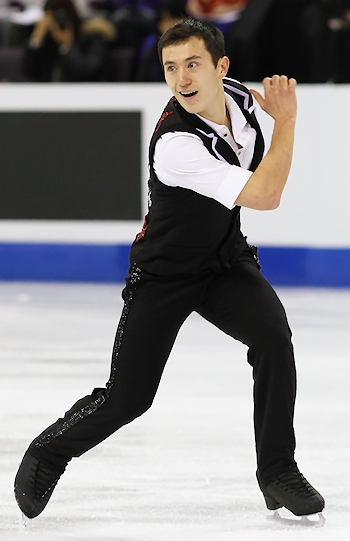 Reigning World Champion Patrick Chan, 21, took the lead after the short program at the 2012 Four Continents Figure Skating Championships in Colorado Springs, Colo. The Canadian was overshadowed, however, by the performances of the three Japanese competitors who could give him a run for his money in Friday evening’s free skate.

“I actually feel more foreign here than I thought I would,” said the locally trained Chan. “I couldn’t find my feet. The ice conditions were a little different than usual. I was a bit more nervous than usual. I was very happy how I was able to gather myself.”

Chan opened his Take Five routine with a stumble on a quadruple toe loop attempt, but quickly recovered and took command of the ice for the rest of his program. He scored a new season’s best 87.95 points for his effort.

“This whole year has been a test,” Chan said about being the hunted instead of the hunter. “This is just another step in my development, and it hasn’t been easy. I expect to have to continue to fight for everything this season, and I’m looking forward to that.”

Though Chan is the leader in points, it was Japan’s Takahiko Mura who came away with the most inspired performance of the night. The fifth place finisher at the 2012 Japanese National Championships, Mura was surprised to be included in the elite company of Chan and teammate Daisuke Takahashi, who sits in third place.

“First of all I must say that I’m very surprised that I’m placed above Daisuke,” Mura said. “As far as the content of the program, I thought it was the best of the season and I hope to place well tomorrow.”

Mura earned the highest technical scores of the night with his Red Violin program that opened with the only quadruple toe loop-triple toe loop combination of the competition.

I was so sad because I couldn’t get into the Grand Prix series. This sadness gave me extra motivation. I understood that if I skate clean like I did today I can get a good score. So this is a very good learning experience for me.

“This season I haven’t done a very good short program until today,” said Mura excitedly. “I am so happy to achieve this great skating in this big competition. I was so sad because I couldn’t get into the Grand Prix series. This sadness gave me extra motivation.”

The 21-year-old trails Chan by less than five points, earning a new personal best of 83.44 points in the competition thus far.

Like Chan, Takahashi fell on his opening quadruple toe loop attempt in his In the Garden of Souls program. The defending champion recovered to nail the rest of the program, and finished with 82.59 points.

“I was feeling good about the quad toe since I came in and I have been planning to include that, so I went for it today,” explained the 25-year-old. “I was a little bit shaky today, but I feel not too bad about today’s performance.”

Another Japanese skater, Tatsuki Machida, 21, had one of the few clean performances of the night and finished in fourth place with 82.37 points—more than 10 points higher than his previous personal best. His Russian folk music program was a crowd favorite.

Finishing in fifth place—also with a new personal best, was Kazakhstan’s Denis Ten. The 18-year-old fell on his opening quadruple toe loop, but nailed the rest of his program to earn 77.73 points on the night.

“I’m really happy with it,” said Miner of his performance. “It’s my new season’s best, so it’s a good start to the competition and I’m excited for tomorrow.”

Rippon landed a triple flip-triple toe and a triple Axel, but fell on the triple Lutz.

“The Lutz is such a silly mistake that I never make,” said Rippon of the fall. “I’d rather make it here at the Four Continents than at the World Championships.””

“I’m going in focused on what I need to do,” added the 22-year-old regarding the long program. “I know that this is just a good practice for Worlds and I’m going to take each element at a time and I’m excited to show my best at the World Championships.”

Richard Dornbush, 13th at last month’s U.S. Championships repeated that placement tonight as he continues to struggle to return to his level from last season. He earned 61.34 points with his The Fifth program.

“It didn’t go like I wanted it to, but I only had a week since nationals so I guess 10 points in a week isn’t bad,” the 20-year-old commented. “I have a lot to look forward to [in the free skate]—triple Axel and triple flip—especially, so I look forward to getting those done.”