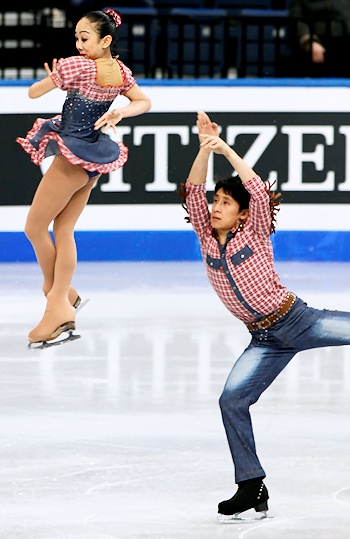 Xiaoyu Yu and Yang Jin made it one-two in the short for the Chinese pairs, while Russia’s Ekaterina Petaikina and Maxim Kurdyukov finished third.

Sui, 16, and Han, 19, not only hold two Junior World titles, but also have the ISU Four Continents title under their belts and dominated the field in Minsk. Overall, however, the level of the competition was high, and there were only two falls among the 20 teams.

The double Lutz was also no problem for the team from Harbin. In junior programs, teams are allowed to perform only a double twist, and the required solo jump this season is the double Lutz. They have the choice between the throw double or triple loop.

“Today we felt really good,” shared Han. “We did our best in the short program. It was a pleasant night.”

“This is our third year at Junior Worlds and each year all the teams are skating very well,” he added. “Each time we learn and improve.”

Yu, 16, and Jin, 17, completed a big throw triple loop, a rare level-four double twist, as well as a very well synchronized double Lutz. The team, who trains together with Sui and Han under coach Bo Luan, earned a level four for the lift, death spiral, and pair combination spin as well, and slightly surpassed their previous season’s best with 54.72 points.

“Today’s performance was really good,” commented Jin. “We did everything we can do and it was one of our best. Hopefully tomorrow we can skate even better in the free skating.”

Petaikina and Kurdyukov turned in a strong performance to Sarabande that included a throw triple loop, double twist, and three level-four elements. However, Petaikina’s double Lutz got an edge call. The JGP finalists achieved a new season’s best with 51.18 points.

“It took us a long time to get to this point in international competition,” noted Petaikina. “Today was one of the best performances of the season. I hope that we skate as well tomorrow and place where we deserve to be.”

USA’s Haven Denney, 16, and Brandon Frazier, 19, are less than one point behind in fourth place at 50.81 points, another season’s best. Their dynamic Cabaret program was highlighted by a throw triple loop, nice double twist, and an interesting lift. Again, there was an edge call for the Lutz.

“It felt just like home, it felt like we were powerful,” said Frazier. “We stayed within, just her and I on the ice. We focused and we had a great time. We treated it like a short program and just tried to entertain as much as we can and the elements came along with it.”

“I think it (the season’s best) shows that we improved a lot since our last competition,” said Denney. “It’s really good to see that improvement with our scores. So we are proud of that.”

The game plan for the free is clear: “It’s the same as today,” Frazier explained. “Everyone is equal. We just go into it like we did in the preliminary round and in our short round. We will just go as powerful as we can, as calm as we can, and give it our best. That’s all we can do.”

The new Russian team of Vasilisa Davankova and Andrei Deputat skated in the first warm up group and set the bar high with a clean performance. They landed a throw triple loop, high double twist, and got a level four for three elements in their Flamenco routine, however, the footwork was only given a level two. The team from Moscow picked up 50.50 points and finished fifth.

Katherine Bobak and Ian Beharry came in sixth with 49.77 points. Bobak landed the throw triple loop on two feet and also had an edge call on the double Lutz. These errors cost the JGP Final silver medalists valuable points in this strong field, however, they looked elegant in their program to Out of Africa.

Margaret Purdy and Michael Marinaro of Canada and USA’s Kylie Duarte and Colin Grafton were seventh and eight with solid skates.

Kamila Gainetdinova and Ivan Bich of Russia are debuting in their first international event, and gave a clean performance to come in ninth.

JGP Final bronze medalists Britney Simpson and Matthew Blackmer (USA) finished in a disappointing 11th after a fall on the throw triple loop.