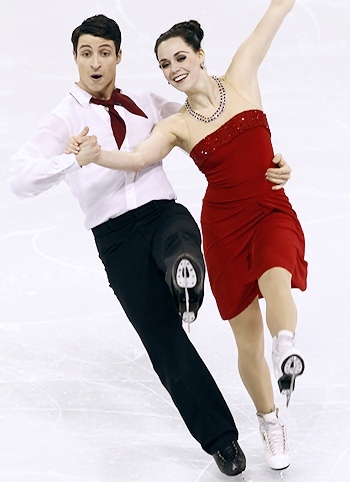 “I think it was a great performance,” Moir said. “Today we felt really strong and it was kind of a test for us up here with the altitude, and we were definitely feeling it. Regardless of that, we just came together and got a strong score and it was just a great feeling.”

The difference in scores came down to the technical panel’s calls as the two teams were nearly tied on the program component scores. Virtue and Moir earned level four in all but one element—the circular steps (level 3). Davis and White, however, earned four calls of level three.

“Today I think some of the calls didn’t go our way,” White said. “I could not be prouder of the way we fought through both programs. Obviously you can tell by the way I’m breathing it’s not easy. We really worked through it. We wanted to work on expression and we did that. I felt like our elements were pretty good.”

The champions skated to music by George Gershwin, and used it to create a playful mood, fitting for this team. With kind of a Fred and Ginger flair, Virtue and Moir sold the program with a light sophistication.

“I think we really skate to win,” Virtue said. “We skate for ourselves, we really love these programs.”

Moir added, “There’s no doubt that we benefit from training with Charlie and Meryl and Maia and Alex (Shibutani). You can’t slack off when you go the rink every day and see your biggest competition working hard every day. We have a great atmosphere and have been able to make it work.”

Virtue and Moir earned a total of 182.84 points in the competition, while the silver medalists Davis and White earned 179.40.

This was Davis and White’s first loss since the 2010 World Championships—a fact that was not lost on the four-time U.S. medalists.

“I think we’re pretty proud of ourselves finishing this competition. Nothing came easily, but we really fought for it,” Davis admitted. “We’re really proud of what we put out there.”

“Our score really isn’t what we were looking for,” she added. “Silver isn’t the color we were aiming for this year, but that’s OK. We have a lot to go home and work on and we are looking forward to it.”

In stark contrast to the whimsical choreography of the champions, Davis and White performed instead a more refined program to the music from Die Fledermaus. The altitude in Colorado Springs seemed to take it’s toll on White at the end of the performance.

“I was tired, but it’s not something you really think about when you’re going through it,” he said. “There’s always the next step to push you, and you’ve got your partner to rely on. I don’t feel like it affected the performance, but yeah, I was gassed when I was bowing.

Canadians Kaitlyn Weaver and Andrew Poje took the last step on the podium and a giant leap forward with their passionate Je Suis Malade program. Along the way, the Canadian silver medalists have established themselves as potential medalists at next month’s World Championships.

“This is definitely a stronger field than before,” Poje said when comparing the team’s win in this event in 2010 to this year’s. “Even though this is just a bronze medal, we are grateful to be where we are at this point in our season. Medals are great, but they are kind of peripheral to the overall performance, and this is something that Kaitlyn and I can be proud about.”

In preparation for Nice, Weaver and Poje know that they have their work cut out for them. Like many of the other teams here, they will be working on their levels so that they can increase their base score.

“We treated this competition as sort of a stepping stone,” Poje explained. “We are going to go back and look at the levels—especially in the short dance. We left a few points out on the ice in this competition, and we don’t want to leave any doubt at Worlds. We’ll also work on bringing our performance up a bit higher.”

The bronze medalists earned a total of 163.26 points in the competition, defeating the fourth place finishers, Maia Shibutani and Alex Shibutani of the USA by nearly five points.

The American silver medalists performed well in their Glenn Miller free dance, but lacked the connection that Weaver and Poje demonstrated. In fact, Shibutani and Shibutani kept pace with the bronze medalists in the technical marks, but were overtaken on the program component scores.

“Alex has been fighting a cold all week so it was definitely challenging today,” Maia revealed. “I’m proud of the way we fought through the performance and I’m proud of Alex for skating the way he did when he’s not feeling his best.”

The reigning Worlds bronze medalists earned 158.29 points in the competition, far below their personal record from the World Championships last season, and have much to work on before they compete in Nice next month.

Americans Madison Hubbell and Zachary Donohue struggled once again in the free dance, but managed to hold onto fifth place overall. As in yesterday’s short dance, Donohue fell during the team’s I Put a Spell on You program. The U.S. bronze medalists earned 158.29 points in the competition.

“We learned what not to do,” Donohue said. “Even though we didn’t have the best skate, if anything, we improved our partnership this week. Being there for each other, especially her for me, that’s a positive to take from this.”

Canadians Alexandra Paula and Mitchell Islam finished in sixth place while the Chinese team of Xiayang Yu and Chen Wang remained in seventh.