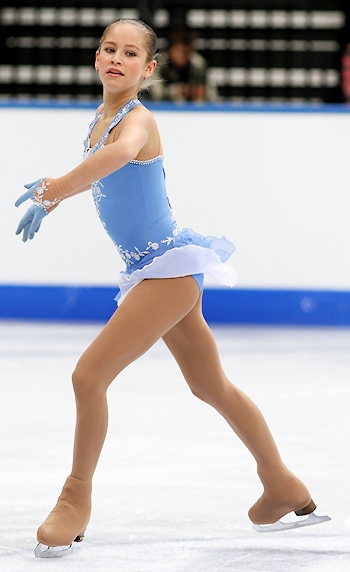 Russia’s Julia Lipnitskaya crowned her spectacular international debut season with the gold medal at the conclusion of the 2012 ISU World Junior Figure Skating Championships in Minsk, Belarus, on Saturday.

USA’s Gracie Gold, another newcomer, took the silver medal and defending champion Adelina Sotnikova of Russia settled for the bronze.

Lipnitskaya easily dominated the ladies field. The tiny teen nailed each jump, hit her positions in each spin, never missed a step, and oozed unreal confidence for a 13-year-old.

At the end, the protocol showed a double Axel-triple toe-double toe, another double Axel-triple toe, triple Lutz, triple loop, triple flip-double toe, and triple Salchow in addition to three spectacular level-four spins and level-three footwork. There were no negative Grades of Execution (GoEs), and in fact, most elements received plus two GOEs from the panel of judges.

“I am very glad,” said the Junior Grand Prix (JGP) Final champion. “I liked everything and the performance was ideal. Now I am in a great mood. It was a great ending for a great season.”

When asked about her calm reaction in the Kiss and Cry while her coach jumped up in joy when the marks came up, she shrugged. “Really? I had a calm look on my face? Well, I was just thinking.”

Gold had a strong outing as well. The 16-year-old landed a triple Lutz-triple toeloop combination and four more triples in her program set to The Mission and The Untouchables, however, she doubled the loop and the Salchow was shaky.

“I am very happy with my skate,” said Gold. “I thought I skated really well. It wasn’t perfect. I had a few little mistakes, but overall I thought I did a very good job with my performance and my placement.”

“It was really exciting to have this great season, to come to Junior Worlds and medal,” she added. “I worked really hard this season and I think I deserve it and I skated really well here. It feels good.”

Sotnikova hit her triple Lutz-triple loop combination right out of the gate and produced four more clean triples, but she crashed on the triple loop. The 15-year-old picked up 111.88 points and accumulated a total score of 168.45.

“I am quite satisfied with my performance as I proved that I am able to do the hard elements,” said the three-time and current Russian National Champion. “I didn’t skate completely clean but I am still happy with it.”

“My job for this season was just to skate well, not aiming at any placements,” Sotnikova added. “I should skate clean, and the judges will decide the outcome. It didn’t quite happen this year like it did last year, but I already learned something for next year.”

Satoko Miyahara of Japan, another successful debutant at Junior Worlds, came in fourth (157.78 points). The 13-year-old completed a triple Lutz-triple toe combination as well as four more triples, but she stepped out of a triple flip.

“I was very nervous today but I enjoyed my performance,” offered the Japanese Junior Champion. “I am pleased with my result.”

China’s Zijun Li turned in a clean performance with six triples, however, the Lutz had an edge call. She placed fifth at 157.31 points.

Polina Shelepen of Russia rallied back from her sub par short program and was the only skater to land two triple-triple combos— a triple Lutz-triple toe and a triple Salchow-triple toe. The Muscovite was ranked fourth in the free skating and jumped from 12th to sixth place (156.02 points) overall.

USA’s Christina Gao slipped from fifth to seventh overall (151.09 points). The highlight of her Tango program was a triple flip-triple toe combination, but she popped a Salchow and stepped out of the triple loop.