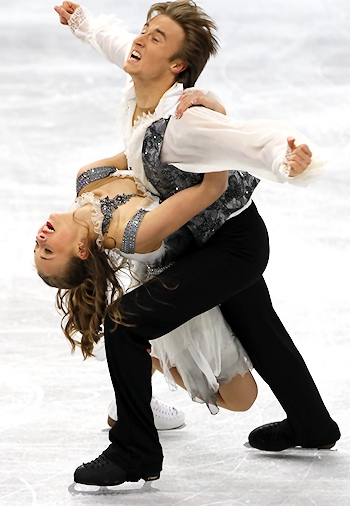 Victoria Sinitsina and Ruslan Zhiganshin of Russia perform to "Phantom of the Opera" at the 2012 World Figure Skating Championships.

For the third year in a row, Russia celebrated a double victory with Alexandra Stepanova and Ivan Bukin taking the silver medal. USA’s Alexandra Aldridge and Daniel Eaton moved up from fourth to secure the bronze medal.

All three teams competed in their first Junior Worlds and are unsure if they will move up to the senior level next season.

Overnight leaders Sinitsina and Zhiganshin had drawn to skate first in the final flight. They seemed calm and gave an emotionally and technically strong performance to Phantom of the Opera. Their lifts, twizzles and spin merited a level four, while the two step sequences were graded a level three.

The ISU Junior Grand Prix Final Champions showed off their skating skills and smoothness on the ice, and their elements flowed into each other and were right on the music. This performance was worth 90.03 points, a new season’s best, and the Muscovites earned a total of 153.81 points.

“I have a lot of thoughts right now,” said Sinitsina. “We are very, very, very happy. We are pleased with our performance. We did everything we wanted to do.”

Stepanova and Bukin’s dance to Live and Let Die by The Beatles was dynamic as well, and the Muscovites picked up a level four for five elements. The circular steps were a level three, however, the midline garnered only a level two.

“We are also happy but we didn’t show everything we can do,” Stepanova commented. “We are glad to have come second and the competition ended well for us.”

“I heard the marks of Victoria and Ruslan,” she added, “but once we took our starting position, I didn’t think about it anymore. You only think about your own skate. Our coached said that we slowed down in the footwork, but basically for us it wasn’t hard to skate.”

Aldridge and Eaton entertained the crowd at the Minsk Arena with their upbeat performance to Lord of the Dance. The Americans posted a season’s best of 83.38 points and accumulated 141.14 points overall, edging out Russia’s Anna Yanovskaya and Sergey Mozgov for the bronze and preventing a Russian sweep.

“Alex and I went into this competition, especially in the free dance, not thinking about placements or where we wanted to finish,” explained Aldridge. “We went out on the ice and performed our program to the best of our ability. Once we finished, I think the first thing that came to my mind was that we just had the program of our life and we couldn’t be happier with it.”

“We trained since June all the way until now and have several competitions underneath our belts,” added Eaton. “The program gets better every single time and we were happy with the way we skated.”

Yanovskaya and Mozgov showed a Flamenco program. They picked up the same levels for their elements as Stepanova and Bukin, however, their performance was marred by an interruption. Referee Hilary Selby stopped the team when she saw that Mozgov’s left bootstrap had come loose. He fixed it quickly, but obviously the overall impression suffered a little from the incident. The Muscovites, who have only skated together since  May, dropped to fourth at 140.83 points.

Yanovskaya took it in stride.

“We skated well, clean, except for that little incident,” she offered. “This is our first Junior Worlds and we have been skating together for a short time, so I consider fourth place a good result.”

“Maybe the incident was a lesson for us,” she added. “We will draw our conclusions from it. Actually I don’t quite understand why they stopped us. We didn’t even realize that the boot strap had come off. When the music stopped, we thought at first that it was a music problem.”

Gabriella Papadakis and Guillaume Cizeron of France delivered a lively Rock’n’Roll dance to Elvis Presley hits Jailhouse Rock and Blue Suede Shoes and made no errors. Although they achieved a new season’s best score, the French team slipped to fifth at 138.70 points.

“Like in the short dance, we did all our elements without mistakes,” Cizeron noted. “We did our job. We didn’t make the podium, but the result doesn’t depend on us. We finished in the top five which was our goal coming in.”

Canadians Nicole Orford and Thomas Williams delivered a smooth performance to Gone with the Wind to finish sixth (134.61 points).