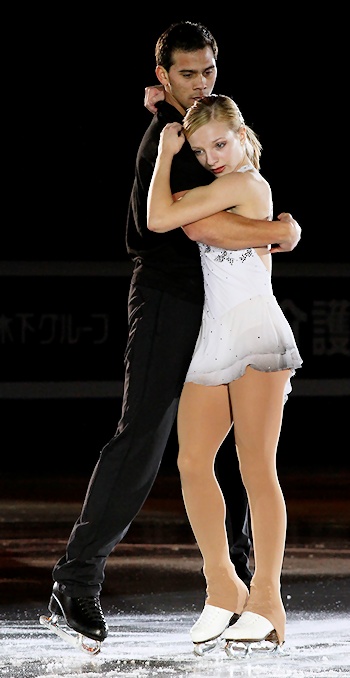 Katherine Bobak and Ian Beharry of Canada perform to Queen's "Who Wants to Live Forever" at the gala of the 2011-12 Grand Prix Final of Figure Skating.

Skate Canada has been blessed with an embarrassment of riches this past season, boasting two of the four gold medalists from the recent Worlds Championships in Nice, France. There may be no end in sight for the perennial skating powerhouse as the level of talent on the junior level has shown incredible promise this past season.

Katherine Bobak, 17, and her partner Ian Beharry, 20, arrived on the international scene just a few months after pairing up. The 2012 Canadian junior pairs champions came together after previous partnerships dissolved after the 2011 championships last January.

“We were both looking for new partners last year in February, so a mutual friend helped us exchange contact information and set up tryouts,” said Bobak. “The tryouts were very successful and motivating, and spawned a new partnership on Saturday, February 12, 2011.”

Immediately, the duo began preparations for their inaugural season with coaches and former Canadian champions Kristy and Kris Wirtz in Waterloo, Ontario.

“Katie is very dedicated, and has a lot of determination and passion for the sport,” Beharry, 20, explained. “After our first tryout, I knew that it was good, but I kept coming back for tryouts until Kris asked me if I was going to continue trying out or make a decision.”

“It took one look and you knew they had the ‘it factor’,” said Kris. “Beautiful look! Their body types were perfect for each other, and the ‘pretty fair girl with the dark handsome man look’ was incredible. It was also obvious that they could both skate pairs well.”

Bobak appreciates the same qualities in her ‘hard to get’ partner.

“Neither one of us really needs motivation—we’re both pretty goal-oriented laser focus types,” she commented. “Ian really helps keep my nerves under control during important events.”

With just a few months of training under their belts, Bobak and Beharry traveled to the Indy Challenge in Indianapolis last summer to compete together for the first time. The duo won the highly competitive event.

“The results shocked me so much that I jumped on Ian backstage,” Bobak admitted. “The partnership and skating felt they had improved and evolved, so the results were just an incredible bonus.”

The victory brought an invitation to compete on the Junior Grand Prix circuit, and in late August, Bobak and Beharry traveled to Gdansk, Poland, to make their international debut. They finished with the silver medals.

“Winning in Estonia was the most thrilling event of the season for me,” Beharry said. “To see the Canadian flag raised and to have our national anthem played for us was very special.”

At the Final in Quebec City, Quebec, Bobak and Beharry surprised many by taking the silver medals behind three-time World Junior Champions Sui Wenjing and Han Cong of China. They also earned the highest score ever by a junior Canadian pair in an international event, collecting 152.65 points in the competition.

“The Grand Prix Final definitely steals the show in my mind for the favorite event of last season because we skated two clean programs, attained new personal best scores, and had a blast interacting with our friends from other countries,” Bobak recalled. “The entire competition was ran flawlessly, and the accommodations were to die for.”

Up next for Bobak and Beharry was winning the Canadian title and being named to the 2012 World Junior team that competed in Minsk, Belarus, in March.

“To finally win juniors was such a fantastic moment for both of us,” Bobak said. “This was my third and Ian’s fourth year chasing after that gold medal, so to have finally earned it was an incredible experience.”

“To finally get that elusive title was thrilling,” agreed Beharry.

Leading up to Minsk, training was not going as well as the Canadian champions had hoped, however, the duo still managed to finish in a respectable seventh place.

The experience of competing on the world stage was not lost on Beharry.

“Worlds was just amazing,” Beharry said excitedly. “To be there with so many amazing skaters and friends was awesome. The experience of competing at such a high level will help us to know what to expect in our future.”

Bobak and Beharry train about five hours a day, complimenting their on ice training with off ice conditioning and some sort of movement.

“Our typical training day consists of off-ice warm-ups such as running, stretching, lifts, jumps, choreography runs, et cetera,” Bobak detailed. “Then we have a two hour pair session and an hour of singles ice. We then usually fit in either a light or heavier workout for an hour in between a scheduled hour-long class later that day which consists of fitness, dance, or boxing.”

Training with the Wirtzes has been a great experience for the couple, and they enjoy the environment that the two-time Canadian champions have created.

“They are great to work with,” Beharry admitted. “They are very passionate. I’ve now been training with them for a year, and have not come to the rink yet when their passion has not been showing. They are very dynamic.”

Though the responsibilities of coaching duties are split between the Wirtzes, Beharry explained that both coaches fill a different role as trainers.

“Kristy is the task master, while Kris is the cheerleader,” he said.

“We both keep the rink motivated, but Kris is definitely more vocal about it!” agreed Kristy. “Kris strategizes programs and elements, while I make it all come together.”

“We are a perfect match for each other, unless we disagree, then Kristy is right!” Kris said, chuckling.

For the fall season, Bobak and Beharry plan to make good use of their final year of junior international eligibility and return to the Junior Grand Prix competitions. Domestically, they are planning to make their senior debut at the 2013 Canadian Championships.

“We’re going to work on redefining our look a little bit from last year since we were so new to each other,” shared Bobak. “This year, we’re more comfortable together, so we’ll be looking at maturing our overall look and incorporating more difficult elements into our programs so that we can compete with the big guys.”

Beharry continued, “We’re working on stroking, and we want to learn some new lifts for next season. We’re also working on getting new throws and jumps so that we can add them to our programs next season as well.”

For now, Bobak and Beharry are looking forward to a little time away from the rink—a reward for a long and successful season. Recently, Beharry traveled to Cuba for a family vacation, while Bobak took some time away from training to focus on school.

“As soon as Ian gets back, we’ll be working with our choreographer on our new programs,” Bobak explained.

Outside of the rink, Bobak spends much of her free time focusing on her studies.

“I’m in grade 12 at Bluevale Collegiate Institute, just five minutes from the rink,” she said. “I have to take another year, however, because I’ve only been able to maintain three courses with my skating load each semester of my time in high school. In the future, I would like to attend university for medical sciences, biology, health sciences, and maybe even a few business courses, too.”

Beyond that, Bobak enjoys playing with her dog—a Christmas gift from her partner, cycling, dancing, painting, and sleeping.

Her partner is a high school graduate who currently works as a Zamboni driver.

“I like to play video games, and hang out with my friends,” he said.

In terms of goals, both Kris and Kristy would like to see the team win both the Junior Grand Prix Final and Junior World title.

“While high, it’s a goal we feel as coaches they are capable of attaining,” said Kris. “It would also be good to see them step up into senior nationals and see where they fit into the whole national story!”