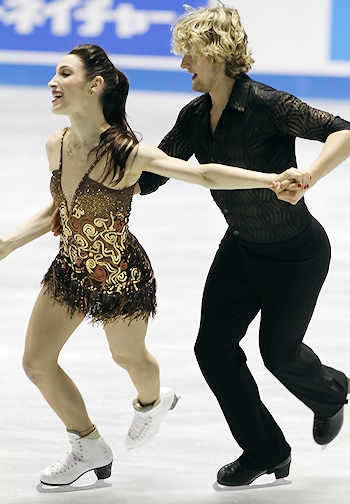 The second ISU World Team Trophy of Figure Skating kicked off in Tokyo, Japan, on Thursday. The six best national figure skating teams of the 2011-12 season are competing for monies totaling US$ 1,000,000. Based on the scoring scale used for the ISU World Standing points, the six teams that qualified for this event are Japan, Canada, Russia, USA, Italy and France.

The event began with the Short Dance.

USA’s Meryl Davis and Charlie White turned in a solid performance of their Samba and Rhumba short dance that was highlighted by three level-four elements (the curve lift, one Rhumba pattern, and the twizzles). The 2011 World Champions earned 72.18 points to take the lead.

“I think we had a really solid skate as far as the technical aspect goes,” Davis noted. “We knew we wanted to have a lot of fun with the program, which we definitely did. It wasn’t necessarily the cleanest skate we’ve had, but I think that is ok.”

“Meryl and I try to use every competition as a stepping stone to improve,” added White. “We felt like we skated the best we could have at Worlds, but that doesn’t mean that after we felt like that was it.”

“We went home and continued to work hard,” continued White. “Coming in second (at Worlds) was not what we were aiming for. We looked at this competition as one more chance to prove ourselves and want to take that opportunity. We want to skate the best we can tomorrow and do everything we practice.”

Davis and White were the first skaters to compete for Team USA. Davis didn’t feel there was a lot of pressure.

“We are really close with all the other members of the team,” she said. “Seeing them up there cheering for us is comforting. We love having that support when we skate.”

“I disagree,” countered White. “Actually, I felt a lot of pressure. I didn’t want to let the team down. They are going to be out there battling for us and I wanted to make sure we did our part. I felt like we were able to do that.”

White is the team captain for Team USA.

“Maybe that’s where all the pressure comes from,” he said. “I am definitely trying to take a leadership role and do my best out there and set a trend for the rest of the U.S.”

Tessa Virtue Scott Moir of Canada had to settle this time for second place at 69.93 points— 2.25 points behind their arch-rivals. Their Samba and Rhumba was characteristic, but the two-time World Champions only picked up only one level four for the lift, while the other elements were a level three.

“It felt great,” said Moir. “It has been tricky gearing back up for this competition. We had to regroup after Worlds and get focused for this. That was challenging, but once we started in our program today, we had such good energy. We came right out of the gate, which I was proud of, because usually when we do that we have a good program. That’s exactly what happened. We finished strong and we felt it definitely was one of the best of the year.”

Nathalie Pechalat and Fabian Bourzat of France entertained the crowd of 6,333 at Yoyogi Stadium with their fun Samba dance, but they had to overcome a scary moment when Bourzat was off balance on the twizzles. Aside from the bobble, the team collected a level four for the curve lift and one Rhumba section.

“That was a close call,” admitted Bourzat, regarding the twizzle. “I was a little tired, but I didn’t put my foot down. We saved it. It was just a little error and it didn’t affect the program.”

“Obviously it wasn’t our best,” said Pechalat, “but right before our last part, I saw how the French team cheered for us, and it really pushed me. This event is about having fun, and it was the very last time for us to perform this short dance and so we gave it everything.”

Italy’s Anna Cappellini and Luca Lanotte came in fourth (63.70) with their ballroom-style program to Rhumba and Samba in which two elements merited a level four.

“We are really proud of ourselves,” said Cappellini. “I had some trouble with the twizzles in practice and we weren’t really feeling each other this morning. Honestly, I didn’t believe that we’d skate clean today, but we went out determined to skate clean. It was probably our second best short dance of the season. It was great to see the genuine support of the Italian team.”

Elena Ilinykh and Nikita Katsalapov of Russia are currently ranked fifth at 60.44 points. Their Samba looked smooth, but the European bronze medalists had just one level four on the lift, while the Rhumba sequences, the side by side footwork, and the twizzles were graded a level three.

“I am actually very pleased with our performance today,” said Katsalapov. “It felt easy to skate and I wanted to skate for our team today. At first I felt a little tired, but as soon as the music started, I got right into the program and I played with Lena.”

Japan’s Cathy Reed and Chris Reed made no major mistake in their short dance, but the circular footwork merited only a level two and they got a few negative Grades of Executions (GOEs) for some small wobbles. The brother-and-sister team scored 49.47 points.

“It has been a really tough season for us,” said Cathy Reed. “There have been so many problems, one after another, but we are lucky to join this event and perform this short dance one more time.”

“I have many injuries,” her brother Chris explained. “Recently, I hurt my right ankle. All my injuries are on the right leg – first the pinky toe, then the knee, and now the ankle. They are all related.”