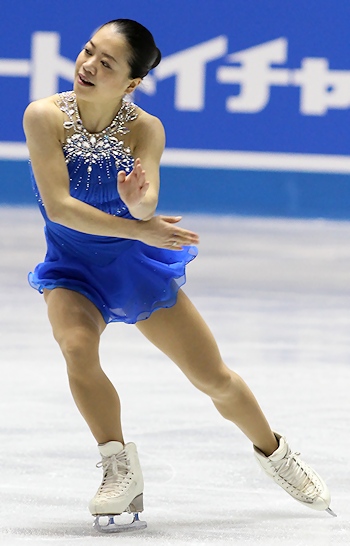 Japan's Akiko Suzuki performs to the "Die Fledermaus" at the 2012 World Team Trophy of Figure Skating.

Suzuki’s waltzy routine to Die Fledermaus was highlighted by a double Axel-triple toe and four more triples, but she doubled a Lutz and singled a loop at the end. The Grand Prix Final silver medalist scored 120.28 points and was ranked second in the free skating, but overtook overnight leader Carolina Kostner with 187.79 points.

“I am very happy for team Japan,” the 27-year-old said. “I moved up to first place, but my performance wasn’t so good so I’m a little bit surprised. The audience was so amazing, they really pushed me forward.”

“The Japanese team was aiming at winning this competition,” Suzuki continued. “We could achieve this goal. I have no other words other than I am so happy.”

Kostner started with a nice triple loop and a triple flip in her playful Mozart program, but then underrotated the double Axel-triple toe combination and crashed on a downgraded triple loop. The World Champion also singled an Axel, but recovered to hit two triple Salchows. She picked up 116.24 points and dropped to second at 185.72 points.

“I am very tired right now,” admitted the Italian. “Since I wasn’t able to train much for this event, it was really hard today. I lacked the confidence I usually have when I’m practicing a lot. I hoped to do better, but it was the best I could do today and so I am quite happy.”

“In each competition you start from zero,” she added. “It is so beautiful for Akiko to win. This is her home country. I know how happy I would be if I won in Italy.”

Wagner turned in another strong performance of her Black Swan program to move up from fifth to third. The 2012 Four Continents Champion landed a triple flip-double toe-double loop combination, a double Axel-triple toe, and four more triple jumps. Her spins and the footwork all garnered a level four, and the only glitch was an underrotated triple loop. The U.S. Champion was ranked first in the free skating with 122.29 points and racked up 179.81 points overall.

“That performance was just the way I wanted to end my Black Swan program,” said Wagner. “It’s one of my favorite programs by far and to skate it clean is quite extraordinary. To top it off, I had a great double Axel-triple toe. Overall, it was a solid program. For the end of the season and the last program, it’s a great way to wrap everything up.”

Adelina Sotnikova of Russia overcame a shaky start when she popped her opening triple Lutz, but rallied back to nail four triples and three level-four spins in her fluid program to Liebestraum. The 15-year-old Russian Champion moved up from sixth to fourth at 169.69 points.

“I am pretty pleased with this performance,” said the young skater. “I didn’t do my planned triple Lutz-triple loop combination, but after that I was able to regroup and did all the other elements with the exception of another triple toe that I had planned.”

USA’s Gracie Gold celebrated a successful senior-level debut with her fifth-place finish. The World Junior silver medalist completed a double Axel-triple toe, a triple Lutz-double toe, and a triple Salchow in her program to The Mission, but some jumps were shaky and she totally botched an Axel. The U.S. Junior Champion scored 169.65 points.

“I was glad I had the opportunity to compete here in my senior debut,” said the 16-year-old. “It was exciting and I was happy to compete with all of the skaters I look up to at the senior level. Most of the pressure was from myself to come out and prove myself. I did that in the short program. I was a little disappointed in this free skate, but I still think I put out a good performance.”

“I’m excited to skate senior next year,” Gold added. “I’m going to get two new programs. I will keep my training the same because it was working out well for me. I might add in some new tricks, but we will see how it goes.”

Kanako Murakami of Japan dropped from third to sixth at 159.62 points after she underrotated four triples and singled a flip. In fact, her only clean triple was the first flip.

“I apologize to everybody, because my performance in the free skating wasn’t so good,” said the 2010 World Junior Champion, “but at least I think I contributed something to team Japan because my short program was good.”

Russia’s Alena Leonova struggled in the beginning of her program when she fell on the back end of her triple toe-triple toe combination and two-footed an underrotated triple loop. Nevertheless, the World silver medalist came back in the second half, landing three triples and a double Axel. She earned mostly level threes for her spins and the footwork, and moved up from ninth to seventh with 153.71 points.

“I am pleased with the second half of the program,” offered the 21-year-old. “I was very upset after the short program, but my coach calmed me down and told me that I achieved a lot this season and there is no reason to be upset.”

“I was sick after Worlds with a cold,” Leonova continued. “It was hard to breathe during the program and I was really tired in the footwork, but I still tried to give my best. The atmosphere at this competition is really nice. It felt more like a show, but on the other hand, I felt more responsibility because I was skating for the whole team and not just for myself, especially since I am the team captain as well.”

At the end of the day, Team Japan took home gold (55 points), while defending Champions Team USA earned the silver medals (53 points). Team Canada edged out France for the bronze medals (42 points) and beat Team France on a tie-breaker.

“It was very difficult to tell how the outcome would be, but it was a lot of fun and I enjoyed competing like this,” Japan’s team captain Daisuke Takahashi said. “The individual ability gives the whole team power. Throughout the competition I felt I was not alone and the team was there for us. That’s very encouraging and it helped to take the pressure off.”

“Team USA, second place,” said U.S. Team captain Charlie White. “Obviously, we were going for first and trying to repeat, but I’m proud of how we all skated. We showed a lot of fight and character. It is a difficult competition and we showed grit and supported each other. Moving forward, we’re going to be going for first next year.”

“For team Canada, it was a little bit of an up and down week,” Scott Moir told the post-event press conference. “We kind of came in and had some ok skates from some of our top athletes and then it was also nice to see some people with less experience to have great performances. This gave our team a boost and gave us a shot to come after this third place.”

“This is turning into an exciting event,” Moir added. “I was here in 2009 and it is a lot different feeling to know it’s going to be at the Olympic Games. Hopefully we can catch up and try to challenge the Americans and the Japanese in the Olympics, but we have some work to do in order to be in that league.”

Team Russia moved up from sixth to fifth while Team Italy dropped to sixth.

Team France won the “Team Spirit Award” offered by the organizing committee for their creative performances in the ‘Kiss and Cry’ and the team box.