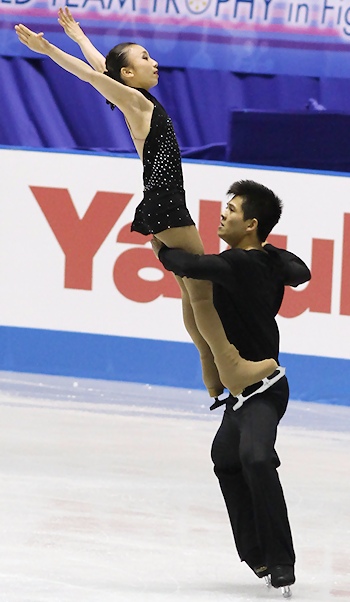 Japan's Narumi Takahashi and Mervin Tran perform to "Imagine" by John Lennon at the 2012 World Team Trophy of Figure Skating.

Takahashi and Tran gave an elegant performance to Imagine. The World bronze medalists had to overcome a shaky start when Takahashi stumbled on the triple Salchow, however, the team quickly recovered to produce a triple twist (that garnered a rarely seen level three) and throw triple Salchow. The team also delivered a level-four lift, footwork and death spiral, and picked up 64.92 points.

“Yesterday, we didn’t have a competition, we were just watching our teammates,” commented Takahashi. “I was so tired from cheering and couldn’t wait to compete. My feeling was building up. I was so ready, and today it was very nice that I could stay calm and deliver a good performance.”

“Last time we were just attending this event, but this time we were actually able to lead the charge for the team,” noted Tran. “That is a very good feeling. I was so excited to compete today because I felt so ready yesterday. I was inspired by the others. Maybe I was too excited, because I almost made a mistake in the step sequence.”

Bazarova and Larionov were out of sync in their side by side triple toes were out of sync, and Bazarova put down her hand on the throw triple flip. Nevertheless, their triple twist and lift were excellent, and the team also garnered a level four on their pair combination spin. The Russian Champions earned 62.02 for their routine to Tosca.

“There was a little error on the throw triple flip,” acknowledged Bazarova, “but with this being the very end of the season, we are happy the way it went and that we didn’t make any major mistakes. I went out thinking that this is the very last time that we will perform this program and I wanted to give the very best.”

Skating to a Blues and Latin mix, Berton and Hotarek completed a triple toe, throw triple loop ,and three level-four elements, but the triple twist was messy. The Italian Champions earned a score of 59.28.

“It was good and we had fun,” said Hotarek. “I am happy about the cheering thing. In the other competitions you don’t have so much opportunity to do that, but actually now you realize that it doesn’t matter when you are at the rink all day. We do two programs every day in practice, so we can push through even if we are a little tired.”

In the Kiss & Cry, the team showed off two little teddy bears dressed in their costumes.

“A fan gave us these yesterday and so we decided to take them to the Kiss & Cry today,” said Berton. “I think I’ll give mine to my father because he put on all these Swarovski stones one by one on the costume.”

Canada’s Meagan Duhamel and Eric Radford are less than one point behind in fourth place at 59.27 points. Their Concierto de Aranjuez routine was marred by two falls – Radford missed the triple Lutz and Duhamel fell just before the death spiral. Nevertheless, the Canadian Champions recovered quickly and finished the rest of the program without further mishap.

“For me on the Lutz, I felt comfortable going in,” explained Radford. “I felt good in the air, hit the landing, and then just wasn’t sure on the landing. I just slipped off the edge. So that was a little disappointing. It kind of put us out of contact when we were going into the death spiral.”

“He had to get in front of me and I continued to do the choreography without thinking I should wait for Eric,” Duhamel added. “By the time I realized I had to wait for him, I tried to stop and as I tried to stop I face-planted. From the footwork to the end, we got ourselves back.”

“We had a lot of monitoring sessions with Skate Canada trying to help us learn how to regroup quicker,” Duhamel continued. “I think in terms of regrouping we did that well this time. We’ll skate much better tomorrow. We changed our long program a little bit. We put in a triple toe instead of a triple Lutz to help us be more relaxed. I’m sure tomorrow is going to be a great program.”

USA’s Caydee Denney and John Coughlin finished fifth and are close to the top three with 58.93 points. The only glitch in their short program came when Denney touched down on the throw triple flip.

“It was fun to get out there one more time,” said Coughlin. “We love this program and love skating for this country’s crowd, so we had a good time. It wasn’t perfect – we both made some bobbles that won’t necessarily show up on a protocol sheet. There are things we improved on. We got a level 3 on our death spiral and it was a level 1 at Worlds. Some positives to take away.”

Daria Popova and Bruno Massot of France were a distant sixth as Popova fell on the triple toe and the lift received no level.