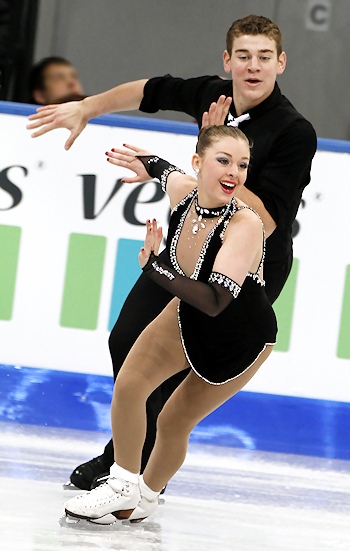 She is the younger sister of two-time U.S. Champion Caydee Denney, and he is not the Hollywood actor who starred in such films as George of the Jungle and the Mummy trilogy. However, 16 year-old Haven Denney and her 19 year-old partner Brandon Frazier are stepping into the figure skating spotlight and making a name for themselves.

The duo first teamed up in 2002, but instead of a blade on the bottom of their respective skates, Denney and Frazier were roller skaters. It was after winning a silver medal at the 2003 U.S. Artistic Roller Skating Championships that they switched to figure skating.

“Caydee switched to ice skating first, and I decided to do the same,” Denney explained. “Brandon followed because we wanted to continue skating together.”

Denney and Frazier won a bronze medal at the 2008 U.S. Junior Championships in Salt Lake City as intermediates. Shortly thereafter, the team decided to split.

“We had some growing and development to do,” Denney said, “so we went our separate ways.”

Denney relocated to Florida and quickly teamed up with Daniel Raad, with whom she competed for three seasons. Frazier stayed put in the Colorado Springs area, and teamed up with Mandy Garza. The two were the 2010 U.S. novice bronze medalists and 5th on the junior level in 2011.

“We both found ourselves without partners after nationals in 2011,” Frazier recalled. “Haven was relocating to Colorado Springs, so we decided to have a try out. Even when we were apart we had a special bond, and to be able to reunite was good.”

“Skating with Brandon is so much fun,” Denney added with a giggle. “It was great to be able to skate with him again.”

Though they had history together as a team, reuniting was not an easy task—at least from a skating perspective.

With just a few short months of training under their belts, Denney and Frazier entered the summer competition season with the hope of earning an invitation to skate on the Junior Grand Prix circuit. It was at the Indy Challenge in late July when the duo had a breakthrough performance, finishing first among the American teams in the free skate in a very strong field of junior pairs.

“There was so much that we had to do in such little time,” Frazier remembered. “We were making progress, and that is what we had to focus on.”

U.S. Figure Skating took note of this budding team, and assigned them to compete in Riga, Latvia, where they finished 8th in their Junior Grand Prix debut. The team improved their standing a few weeks later at the event in Innsbruck, Austria, finishing in 7th place.

“After that we had a long break to prepare for the U.S. Championships,” Frazier said. “Because there weren’t enough entries, we didn’t have to skate at Sectionals, so we immediately started our preparations for San Jose. We had about three and a half months between competitions.”

In those months, Denney and Frazier stayed at their training base in Colorado Springs and worked with coaches Dalilah Sappenfield and Larry Ibarra on everything from A to Z. It was in this time that there was incredible growth in the partnership.

“Because we were more trained, we started building confidence,” Denney explained. “We were having good run-throughs, and heading into nationals. We knew that all we had to do was do what we do at home.”

By the time January rolled around, Denney and Frazier were a completely different team from their last competitive showing.

When the competition was over, Denney and Frazier stood atop the podium, claiming the 2012 U.S. junior pairs title.

“I was super excited,” Denney recalled. “It motivates me to work even harder.”

Frazier added, “Being national champion is a big reward for all of our hard work.”

The victory was even sweeter because Denney and Frazier shared the podium with two teams who train with them on a regular basis. Britney Simpson, 16, and Matthew Blackmer, 20, won the silver medal, while Kylie Duarte, 19, and Colin Grafton, 20, finished in third.

“It felt amazing to share the podium with our training mates and friends,” Frazier noted. “We are so supportive of each other, and it was great to be able to share the moment with them.”

As national champions, Denney and Frazier were named to the team that competed at the 2012 World Junior Championships in Minsk, Belarus. The gold medalists finished just off the podium in 4th place, less than four points away from the bronze medal position.

“Junior Worlds gave a whole new feeling of competition for us, I think,” Frazier said. “Nationals was in the past, and we had to focus on what was in front of us. It was competitive in a way that was new to us, and gave it all we had to give. We learned that we still have even more work to do, and we earned a lot of invaluable experience by competing with bigger skaters.”

Their score of 150.55 points in Minsk eclipsed their previous personal best by more than 25 points.

“We were very happy with our two programs,” Denney said. “It was a good finish to the season for us.”

This season, Denney and Frazier have decided to test up to the senior level for the U.S. Championships, but will remain on the junior level internationally.

“Our focus is the Junior Grand Prix,” Frazier said. “We made the decision to compete junior because we think it makes sense for us. This is when we are building our foundation, and while we would like to skate on the Grand Prix, it’s more important for us to not rush our progress and develop as a team.”

In preparation for their senior debut, Denney and Frazier have been working on becoming a bit more seasoned.

“Our new programs have harder transitions and press us to show a more mature picture,” Denney explained.

Frazier continued, “Program components are a big part of our vocabulary right now. We’re really working on our skating skills and showmanship. We are really trying to tell a story in our programs.”

Denney and Frazier will also focus on one of their perceived weaknesses as a team—crossovers.

“We are really working to make our crossovers bigger,” Denney said. “We have a tendency to make them really small, and we need to fix that. We are also pushing through the transitions in our programs. When you add them, you tend to lose speed, and speed is something that you have to have as a senior team.”

Always one for having a plan of attack, coach Sappenfield has made it clear what her improvement plan involves for Denney and Frazier. To help her team accomplish the goals, she has enlisted the help of Julie Marcotte—the choreographer of reigning Worlds bronze medalists Narumi Takahashi and Mervin Tran.

“This year there will be visible growth in their connection and maturity,” Sappenfield asserted. “I had (Marcotte) choreograph for them this season, and she truly did an amazing job with both of their programs. The transitions and interpretations of this year’s programs are a great improvement for them.”

The goals for the fall season are simple—Denney and Frazier want to do better in their Junior Grand Prix events and claim a spot in the Final in Sochi, Russia.

“It would be a great experience to compete alongside the Grand Prix Finalists,” Frazier said, “but since the competition is in Sochi, it would also be cool to skate there before the Olympics.”

Though Junior Grand Prix assignments have not been officially announced at present time, it is expected that Denney and Frazier, as part of the International Selection Pool, will be given an initial assignment. The Junior Grand Prix season will open in Courchevel, France, in mid August.

“I chose to have the kids compete in senior this summer because the short program for both junior and senior are the same with the exception of the twist,” Sappenfield explained. “In the (free skate) seniors do one more lift, so it’s not a big stretch for them. I wanted them to experience skating senior and drawing from that experience for their upcoming Junior Grand Prix events.”

At the 2013 U.S. Championships in Omaha, Neb., Denney is looking forward to perhaps competing against her sister and partner, John Coughlin, the reigning champions.

“I think that I’m going to be very nervous,” she said with a giggle. “Caydee is really supportive of my skating.”

Denney and Frazier spend about nine hours a day at the rink in one form or another. They begin on-ice training at 9:00 A.M. with a singles session before skating three pairs sessions.

“John and Caydee are on two of our sessions,” Frazier said. “We also train with Kylie and Colin, as well as Alexa (Scimeca) and Chris (Knierim) and Britney and Matt.”

After that comes off-ice training which varies from day to day.

“Sometimes we have a girls work out and a guys work out,” Frazier explained. “On Monday and Wednesday we do yoga, and we also do Pilates.”

Being at the rink for so many hours leaves precious little time for other activities.

“I’m currently home schooled,” Denney explained. “I’m a sophomore right now, and that doesn’t leave much time for much else. I like to hang out with Caydee and do stuff outside.”

Born and raised in Florida, Denney is getting reacquainted to the Colorado Springs area.

“Florida is more my home, but Colorado is really pretty,” she said. “There’s a lot to do outside.”

Frazier has signed up for fall classes at Pike’s Peak Community College in Colorado Springs, and is currently look for work. When he’s not at the rink, the high school graduate is typically hanging out with friends from the skating world.

“Chris Knierim and I like to go fishing and play basketball,” he said. “On Friday nights, I sometimes go to movies, and I can usually be found hanging out at one of the other skater’s houses.”