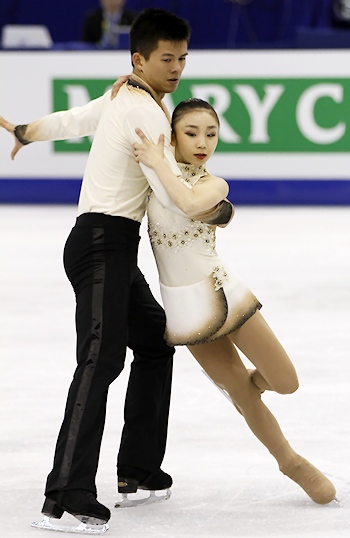 Japan’s Narumi Takahashi and Mervin Tran made history in April when they took the bronze at the 2012 World Figure Skating Championships, becoming the first pair team representing Japan to win a medal at a senior World Championships.

“It (the World medal) actually still hasn’t quite settled in,” said 21-year-old Tran. “I do feel like we were a bit lucky, yes, but at the same time we fought for that spot. We are happy that we were there and that we could achieve it.”

Tran believes that winning the bronze at Worlds will give them extra momentum for the upcoming season. Takahashi, 20, agreed.

“When we got the medal I got confident,” she said. “In practice and competition, I used to feel a little bit small, but now I feel more confident. I think this confidence will help us to improve more.”

Despite the encouraging success, the two-time World junior medalists don’t feel that their result will put extra pressure on them.

“It’s exactly the opposite,” Tran stated. “When we practiced at the World Team Trophy we felt really confident, and even though we were considered as contenders, compared to the top top we felt like we kind of occupied space. Now I feel that we will be there and we will be fighting for a spot.”

Still, the team was surprised that they had stepped on to the World podium in only their second appearance at the event. They finished 9th in their debut in 2011.

“The coach (Richard Gauthier) always told me that we had the ability,” noted Takahashi. “He believes in us and he thinks one day we’ll get a medal or be champions. But even we didn’t think it would happen now.”

“We knew our year would definitely come,” added Tran, “but Aljona (Savchenko) and Robin (Szolkowy), Maxim (Trankov) and Tatiana (Volosozhar), and (Qing) Pang and (Jian) Tong, all those guys have been around for a long time. These guys are the titans of our time. They are up there.”

“For sure we feel we are the next generation,” Tran summed up, “but it’s starting to look like we are this generation.”

Takahashi and Tran are opening a whole new chapter in Japan for pair skating. Before they came along, Japan only had one other pair team that made the podium at ISU events, Yuko Kawaguchi (Kavaguti as she spells it now) and Alexander Markuntsov. They were the first when they took silver at the 2001 ISU World Junior Championships.

However, this Japanese-Russian combination never really broke through at the senior level. Kavaguti and Markuntosov split up and Kavaguti went on to compete for Russia with Alexander Smirnov.

Takahashi and Tran’s success has slightly turned the attention from Japanese singles to pairs. Following the World Championships, the young team found themselves in the midst of a Japanese media frenzy. Japanese skating fans are certainly getting more interested, as well.

“Many people don’t know what pair skating is about with throws and lifts,” Takahashi observed, “but at the World Team competition, many fans were watching. Before, they just wished us good luck, but now they say, ‘you have a nice triple twist’ or ‘your lift is very quiet’. They are mentioning the elements, the technical stuff. I think they are more into pairs now.”

“The Japanese fans always have been very knowledgeable of skating,” added Tran. “That is what is so great, that they know exactly what’s happening. To have them tune in on our actual field is very exciting.”

Tran recalls one junior year when they were one of the top junior teams and did not get as much attention as the other Japanese junior skaters.

“Now, after this competition (World Team Trophy), we feel like the attention is turning towards pairs,” he said. “Hopefully it changes a bit.”

The team event, which will become an Olympic in 2014, is also an important factor. Team Japan won the World Team Trophy and their chances to take a medal at the Olympic team event will be much higher if Takahashi and Tran are eligible to compete. However, receiving Japanese citizenship is a big obstacle for Tran as the requirements are strict. With the success of the team and the chances for a medal in the Olympic team event, the support for him is now growing.

As Kyodo News reported recently, the Liberal Democratic Party (LDP) in Japan decided to support Tran’s citizenship case so that he could compete in Sochi.

Since Tran hasn’t resided in the country long enough (he only travels to Japan for competitions or training in the off-season) and doesn’t speak the language, the hopes apparently rest on an article in the law that permits, with the approval of the National Diet of Japan, the naturalization of foreigners who have provided special service to Japan.

This exemption apparently has never been used before, however, Japan Skating Federation president Seiko Hashimoto, who is also a LDP member of the House of Councillors, noted Tran’s achievements since the team represents Japan.

“I would really like him to compete at the Olympics,” Hashimoto was quoted. “We will try hard to get the Diet’s approval.”

The skaters realize that this matter is out of their hands.

“We do really want to enter,” said Takahashi. “That was our goal from the start and it has not changed, but when we think about it, it becomes too complicated. It is something that no matter how much you think about, you can’t help. So I guess what we’ll do is to practice hard and to try to improve as much as possible.”

Tran agreed. “Everyone likes to go to the Olympics. Our situation is complicated, but we hope to go.”

The team wants to focus on the sport knowing that the politicians and the Japanese Skating Federation will do their best to help.

In the meantime, the season is barely over and Takahashi and Tran have already begun preparations for the next one. Immediately after the World Team Trophy, they worked with choreographer Julie Marcotte on their new long program in Japan.

“We’ll tune it during the off-season,” said Tran. “We actually have most of the short done, too. It is pretty early, but it helps to know everything. We spend most of the off-season fine-tuning instead of making it up and then getting it ready really quick before the first summer competition.”

Tran is staying mum on the music choices for next season, however, he describes the short program as “down to earth-ish” and the long program as “theatrical.”

Although their programs – notably the Imagine short program – were popular with audiences and judges, the pair didn’t give any thought to keeping them.

“I think in our entire career there was one program we kept for two years,” said Tran. “After that, we said we are a young team and at that time, we were growing. We are still growing, but we feel like we need a program that is suitable to our current skill level.”

“Every year I’m always sad to make new programs,” Tran elaborated. “This year especially sad, but I’m pretty sure I’ll say the exact same thing next year. Imagine was a very emotional program for me. Sometimes I had a tear in my eye before we started.”

Meanwhile, the team is entertaining the thought of adding a throw triple flip to their repertoire.

“The throw Salchow and toeloop are very simple throws for us,” divulged Takahashi. “We have some options to improve our points. Our twist is a level three, but we are going to practice and hopefully it becomes a level four. We’ll also brush up on our other elements, too.”

Tran plans to take his vacation at the end of May and wants to go to Las Vegas to watch the shows and to California to visit family. Takahashi, on the other hand, said that she doesn’t take a real vacation.

“I’ll practice during the vacation,” she announced.

Takahashi is currently studying at Keio University and usually attends the spring semester.

“I haven’t decided yet if I’m going this year or if I will take a break,” she said. “We are improving a lot right now, so I want to concentrate more on skating at this moment.”

Tran, however, is taking a break from school.

“I’m working and skating,” he shared. “Coaching. Before, I used to work at a skate shop and it was a lot harder because I spent many more hours at work. Now it’s coaching and it’s fun. Some days it’s long at the rink. To spend so many hours with your skates on can’t be good for your feet, but it’s actually really fun to coach. I like it a lot.”

In Canada, the team is training under Richard Gauthier and Bruno Marcotte together with Canadians Meagan Duhamel and Eric Radford, who finished fifth at Worlds.

“We are very lucky to train with them because their strong points are our weakness and our strengths are their weakness,” Takahashi commented.

“We work very hard on our big tricks because they have big tricks,” said Tran. “At the same time, they have to make sure they get all their levels and everything that we usually get. It’s a nice balance. It’s a great atmosphere.”

Tran feels that everyone is ‘family’ in terms of their relationship with Duhamel and Radford.

“We are rivals,” he explained, “but we are not fighting for ice. We respect each other very much. The coaches are very good at giving both of us the same amount of attention. I don’t feel like there is a favorite team. It’s been great training with them.”

Next season, Takahashi and Tran are hoping that they will get selected for NHK Trophy, as well as one of the Grand Prixs in North America.

“We usually do a small summer competition in Montreal and this year we did the mid Atlantics in New York City,” said Tran. “We’d love to do it again. It was a fun competition. It’s a great way to be ready before we start the actual season.”