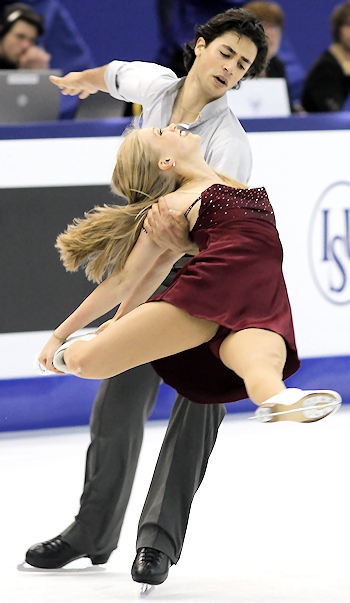 Kaitlyn Weaver and Andrew Poje of Canada have been in overdrive since finishing in a career-best fourth place at the 2012 World Figure Skating Championships in Nice, France. With their post-season commitments drawing to a close, the three-time Canadian silver medalists are just now finding time to begin preparations for the new season.

“We’ve been on Stars on Ice for the past month, and that was an incredible experience for us,” Weaver explained. “It was just two short weeks after the World Championships when we joined the tour. It really was a dream come true for us to take part, and it was a great learning experience. The time that we spent performing across Canada was invaluable in terms of experience.”

After the tour, Weaver, 23, and Poje, 25, took some time for themselves, spending a week vacationing in Mexico.

“Most skaters will tell you that they don’t care where they vacation, so long as it is somewhere warm,” Weaver said with a laugh. “It was great to get away and not have to think about anything or be anywhere at a certain time. It was very relaxing.”

With the tour and vacation behind them, Weaver and Poje are finally finding time to start pulling together their programs for this season.

“We’ve been working on the Yankee Polka a lot, and we’ve also chosen the music for and have been working on our short dance,” Weaver said. “It’s not a secret that our music is from The Sound of Music, and we’ll be using the polka and waltz. Literally, we are in the very early stages of development with that program, so there’s not a whole lot to report. Certainly, the polka is proving to be lots of fun.”

Like many dance teams, Weaver and Poje understand that the rhythm selected for any given season may give advantages to one team or another based on their physical stature and natural performance style. Therefore, the duo is paying special attention to the Yankee Polka this season in order to put their best foot forward.

“We talked about the challenge with the Yankee because when people think of the fast, quick dances, they think about the smaller people performing it well,” the 6’4″ Poje explained. “Because of my stature, I think that’s one of the things that is a challenge for us in this dance.”

So rather than fight the dance, Weaver and Poje decided to approach it from a point of view that they feel will best show off their assets as a team.

“When we came up with the idea of The Sound of Music, we thought we would use the story of the Captain to be the strong figure in that family,” Poje said. “That’s what I’m going to try to be—the most masculine and strong man doing the polka that I can. I’m going to try to bring elegance and strength to the dance without pushing it to hokey.”

Weaver continued, “We’ve agreed that we want to steer away from the over-the-top approach to the polka because it’s not our style. We think that everyone has their own style and some people will do the more German take on it, but for us, we will take a more elegant approach and try to create a classier polka, if you will.”

“I think that people are going to want to stay away from the things that are too tacky,” she continued, “and I think that they will come up with their own ideas about it. When it was a compulsory dance, everyone tried to stick with German roots, but I think that people will have more freedom with it now that it is a short dance.”

Weave and Poje are in their fourth season of working with coach Angelika Krylova and choreographer Pasquale Camerlengo at the Detroit Skating Club.

“Without even a second to think, Angelika is the taskmaster,” Weaver laughed. “She does some choreography as well, but she is wonderful at teaching technique. She has that classic Russian style and brings so much experience to the table because she is a World Champion. She takes care of our scheduling and makes sure that we are in shape. During the season, she is in charge of all of our run-throughs. She’s a well-rounded coach, and helps us with every facet of our skating.”

“Pasquale is our main choreographer,” Weaver continued. “He is the artist of the group, and he has so many ideas in his head that are so beautiful and abstract. It is our job to represent them on the ice.”

Additionally, Weaver and Poje work with a handful of other coaches—specialists if you will, who are helping them to reach their goals in ice dance.

“We work with Elizabeth Swallow, and she is extremely detail-oriented,” Weaver said. “She helps with things that nobody else will pick up, which is wonderful in terms of levels and that black and white mindset.”

“We also have Natalia Annenko who comes from the Soviet style—the Tchaikovskaia school from years and years ago which is so regimented with perfect balletic lines,”continued Weaver. “She helps a lot with our stroking, our skating skills, our ability to execute turns, and the compulsory dances.”

“He came in last season to help us after he retired,” said Weaver. “He has a fresh energy, and works on a lot of things. He is more artistic. He can be the girl or the boy in demonstrating so that each skater knows what is needed. He is great with expression and with the artistic side of the program. The team has so many different skill sets that all of our bases are covered.”

To date, Weaver and Poje have yet to begin work on their new free dance, however, they are starting to think about the elements that they want to put into the program.

“We’re still undecided with the direction that we want to take with our free dance because we are first of all still trying to decide what kind of image or character we want to portray,” Poje said. “Especially after last year with such a strong free dance. We’ve been tinkering around with ideas for elements as well as working hard on the big point makers in the program, but the actual program is yet to come.”

Last year’s successful Je Suis Malade program has weighed on the Grand Prix Finalists’ minds lately, but they are ready for the challenge.

“It’s the hardest part of ice dance—the ability to combine the technical aspects with the emotion,” Weaver explained. “We were pretty spoiled last season because every time we took the ice for our free dance, we got a partial if not full standing ovation. We’re looking to improve on that and connect with our music even more, because that seems to help us stand out to the people who are watching, and we certainly don’t want to stop doing that.”

That program, to this point, is perhaps the most memorable of their young careers, and came to them in a rather unorthodox way.

“We got an email last summer from the contact form on our website, and it was sent from a person anonymously—no email address or name,” Weaver recalled. “The email said that considering Worlds will be in Nice, I think that you should consider skating to this song, and they provided a YouTube link.”

At the time, Weaver and Poje were searching to find the right piece of music to use for the season.

“I was home one day and opened the link and started listening to it. I had no idea what the words meant—I had heard the song before, but I didn’t know the name or who sang it,” Weaver said. “I thought it was a really powerful song, so I sent it to Pasquale right away, and he said that it was one of his favorite pieces and that we should talk about it. When you can get Pasquale to commit to an idea like that, he’s so artistic and open minded, that we knew that it was going to be something special.”

Weaver and Poje later learned the identity of the person who sent the email, but have opted not to reveal his name to protect his privacy.

“He sent another email, told us his name, and verified that he sent us the message,” Weaver said. “He then thanked us for doing the program and said that he never knew that a fan could have so much influence on someone’s career. We really have him to thank for introducing us to this music because it really helped us to have a great season.”

For now, Weaver and Poje continue to work on the short dance as well as overall improvement in their skating.

“We’re looking to build from last season on our technique and our expression.,” said Poje. “We want to smooth out all of the rough edges that we have as a team, and we want to ensure that we execute our levels more consistently because there were some issues with that throughout last season. We’re going to make sure that we perform everything to the utmost level, and also ensure that we build on the level of character that we present in order to create the emotion for the audience and the judges.”

Weaver agreed, adding: “I think that a lot of things came together for us last season. We were in our third year of training with Pasquale and Angelika, so we were consistent in our training and we were working hard every day. Our technique had become a lot better. Because of those things, we were able to skate more emotionally demanding programs since we didn’t have to worry about the technical side as much as we had in the past couple of years. This year we are going to continue to expand upon that.”

Weaver and Poje have been assigned to compete at Skate America in Kent, Wash., in late October, and then again at Cup of China in Shanghai. In Kent, the 2010 Four Continents Champions will face off against reigning world silver medalists Meryl Davis and Charlie White, and will compete against bronze medalists Nathalie Pechalat and Fabian Bourzat in Shanghai.

“At this point in the game, everybody is strong, and we consider everybody a threat,” admitted Weaver. “We don’t go into competition thinking that one field is going to be easier than another because we are just looking to improve ourselves. We’re still the underdogs and we’re still the new team trying to establish themselves in the top group in the world. I never think that we are going to be able to rest on our laurels.”

Though the duo has yet to formally define their season’s goals, the fourth place finish at the 2012 World Figure Skating Championships has provided them with a hunger for more.

“We haven’t really sat down and set our goals yet, but considering the season that we had last year, we’ve been saying that we want to get a world medal,” Weaver shared. “We want to win a Grand Prix. We think that would be really cool—we came so close last season, so now we want it even more. We’re looking to win medals at every event, which is what we said last year, and we were darn close. We want to be pushing the top teams, and to get two Canadian teams on the podium at worlds, which would be the first time that has ever happened.”