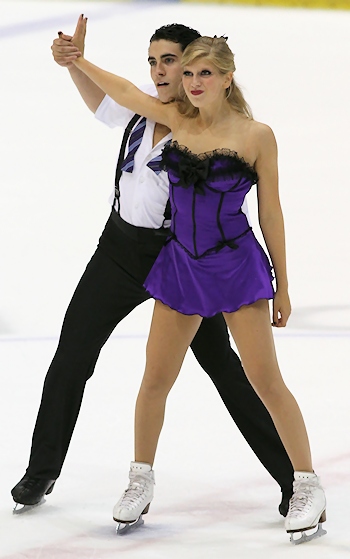 It has been quite the eventful year for USA’s Holly Moore and Daniel Klaber. The duo started the year by winning the 2012 U.S. novice ice dance title in San Jose, Calif., in January, and have since made a coaching change that required a move to Bloomfield Hills, Mich. Moore and Klaber are now settled in and are focused on making a grand entrance into the world of junior level ice dancing.

Moore and Klaber teamed up back in 2006 when Moore was just nine years old, and Klaber was about to turn 11.

“I had stopped skating for a year or so after doing freestyle, which wasn’t really my piece of cake,” Klaber, now 18, explained. “We got a call one day from my sister’s coach asking if I would be interested in coming back to skate in dance. I said yes to the try out, and I remember that immediately after that, the coach started explaining what we needed to do to get to Junior Nationals, and things went from there.”

Though things were a bit uncomfortable at first—holding hands with a boy was a little uncomfortable for the shy young girl at first, Moore and Klaber have grown into great friends throughout their years as a team.

“At first it was a little strange for me because I was so young,” 16-year-old Moore admitted, “but over the years we’ve learned each other’s personalities and have become pretty good friends. I think that is what has kept us together for so long.”

The team has competed together at every level from juvenile to junior, and have a string of five straight national championships appearances.

“We are extremely fortunate and we were just discussing that we’ve both grown at the same rate and have very similar body builds,” Klaber said. “It’s allowed us to continue to grow as a team.”

“Massimo and Pasquale are extremely attentive to the choreographic side of our skating,” offered Klaber. “They do a lot of other things, but that is their major focus. Angelika looks at everything, while Liz and Natalia specialize in the pattern dances and footwork.”

Prior to relocating, Moore and Klaber had been making day trips to Detroit from their home club in Cleveland in order to train with this group of coaches. The move seemed like the next logical step in their skating careers.

“We were going back and forth between here and Cleveland for the past couple of years to supplement our training,” Moore said. “Now that we are here full time, it feels really good to be part of the group. It was a really easy transition because we already knew what we were getting in to.”

The training group, in fact, has made the transition for the teenagers quite easy.

“This is a tight knit community of skaters from all over the world and the fun and support they have for each other is evident in everything from the impromptu dance parties in the lobby, to the Saturday night volleyball games, to weekends spent in downtown Birmingham or on one of the lakes in the area,” Moore explained.

Since the coaching change, Moore and Klaber have been working hard to prepare for their debut season as junior level skaters.

“There have been some struggles, but not as much as I had expected,” Klaber admitted. “I heard from a lot of people that moving from novice to junior is like starting over, and a lot of things did reset when we moved up. However, I actually feel really comfortable now—we’ve had some critiques and one-on-ones with judges, and they have given us very positive feedback.”

Moore agreed with her partner’s assessment.

“Our goal in moving up was to make the transition pretty seamless, and I feel like that so far with the feedback that we’ve received, we are doing that. Our coaches have been really pushing us, so we’re pretty prepared.”

In addition to working on technical elements such as the step sequences, Moore and Klaber have spent a fair bit of time attempting to improve their connection on the ice. Their programs—a short dance to music from the Grease soundtrack, and a free dance to the Moulin Rouge soundtrack (Lady Marmalade, Sparkling Diamonds, and Come What May) are a departure for the young team.

“We haven’t really done a character-driven piece before, so we’ve been having a lot of fun with our Grease short dance. These are characters that people know,” Moore offered. “Our free dance is a bit more modern and edgy than our other programs. We’ve been having so much fun with these programs, and we are really looking forward to seeing how they grow throughout the season.”

The duo made their junior debut at last month’s Lake Placid Ice Dancing Championships, finishing in third and sixth place in their short dance and free dance groups respectively.

Moore and Klaber will make their Junior Grand Prix debut later this week in Courcheval, France, and are excited to take in the international competition experience.

“We’re hoping that we can go out there and skate really well, and hopefully get a second assignment,” Moore said enthusiastically. “That would be great, but if not, we’ll be excited just to have gotten that international experience.”

Should Moore and Klaber qualify for the 2013 U.S. Figure Skating Championships in Omaha, their goals are modest—to skate well. They know from experience that if they skate well, good things happen.

“We don’t really have any placement goals,” revealed Klaber. “It would be challenging in our first year to expect a high placement. “I think for us, we just want to show that we are ready to be at this level and show that we have fun with our programs like we always do.”

A high school graduate, Klaber is taking this year off from school to focus on all of the changes in his life. He currently rooms with two other skaters—Jean Luc Baker, who placed 6th at the 2011 U.S. Championships in ice dance, and Paul Bellantuono, who competes in ice dance for Estonia.

“Next summer I will probably start taking classes at some local university, but I don’t think that I will be doing anything big until I am done with skating,” he said.

Moore will be a junior in high school this fall, and is looking forward to the flexibility that her new school will offer.

“In Cleveland, I went to a private school, and although they were really flexible with my schedule, I still had to go a full day which was challenging” she explained. “This year I will be attending a local school that has a half day program, so I will be able to balance school and skating a little better. I’m really looking forward to the opportunity.”

Beyond that, Moore and Klaber have the same aspirations as most other skaters—to compete at the Olympic Games.

“Everybody wants to make it to the Olympics and to Worlds, but I think it’s really important to stay in the moment and keep improving day to day,” Moore said. “It’s really fun to dream about doing those kinds of things. We have teams in our rink who have been to (these competitions), and it’s really inspiring to look up to them. Hopefully one day, we can do the same.”