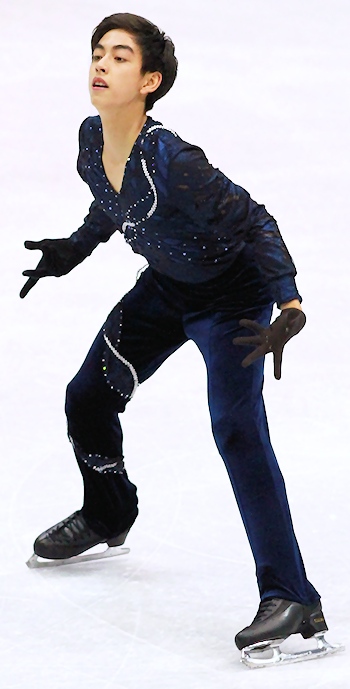 Michael Christian Martinez of the Philippines missed the podium Friday by a mere 0.37 points while competing at the Junior Grand Prix of Figure Skating in Lake Placid, New York.

Although the Philippines is not a natural skating country, they have a naturally talented figure skater that began turning heads last season: Michael Christian Martinez.

The 15-year-old from Muntinlupa, a city of 400,000 inhabitants south of the capital Manila, confirmed just this week that he is an emerging young skater by finishing fourth at the ISU Junior Grand Prix (JGP) in Lake Placid, USA. The teen missed the podium by a mere 0.37 points.

Martinez hit his first ever triple Axel in competition in the short program at Lake Placid, but was so focused on this jump that he went on to double the solo flip and the Lutz in combination. He ranked seventh.

The short program to Toccata and Fugue, however, was not the program he originally had planned.

“In August, I joined two local US Figure Skating competitions which were endorsed by our Philippine Federation just to have a warm up competition prior to the Lake Placid JGP,” Martinez explained. “I used these competitions to test my two new programs and test my triple Axel. I did not have good PCS (program component scores) in my short program in these two competitions, and a judge told me that the music and program does not fit me, so I decided to change it.”

With Alex Chang, he quickly mounted a new program just a week before Lake Placid.

“I was so nervous during my short program, because it was just a week old and has not been polished yet,” Martinez admitted. “It was a rushed choice and I didn’t have much time to choose good music and just decided to use my novice music so at least I would be familiar with it.”

“We will change the program after the JGP (in Lake Placid) as we still have two weeks before my next competition in mid- September,” Martinez he added.

In his free skate to King Arthur, the Filipino pulled off the triple Axel again as well as four triples and three level-four spins to move up three spots. The mistakes in the short cost him the medal in the end, which would have been a historical first for the Philippines. However, Martinez will get another chance when he competes in his second JGP in Zagreb.

Before the event in Croatia, however, Martinez will debut at the international senior level at Nebelhorn Trophy in Oberstdorf, Germany, at the end of September.

The skater is currently training in California, mostly with Ilia Kulik, but also with John Nicks and Peter Kongkasem. Over the summer he learned the triple Axel.

“I was actually landing the triple Axel since 2011, but was very inconsistent and sometimes cheated so we decided not to put it in my programs as it might harm my scores,” the teenager shared.

Martinez’ talent is obvious; otherwise he would not have made it from a recreational skater from the Philippines back in 2005 to a Junior Grand Prix contender with a triple Axel seven years later. Especially since he started out in a shopping mall.

When training at home, the skater faces a lot of challenges.

“It’s an Olympic-size rink that we have in Manila, however, it is mainly intended for public use and there is no freestyle session,” Martinez revealed. “The ice is cut (resurfaced) only a maximum of twice a day and is not properly zambonied. It does not have the same smooth surface as in the USA. As a result, it’s very hard to execute multi-rotational jumps.”

“The ice is rough and has too many bumps and too many people,” he continued. “I need to stay in the rink for six to eight hours, transferring from one rink to another, just to be able to execute my needed elements and to be able to practice.”

Martinez always has to check which of the two mall rinks available have less people before practicing.

“Over the years I suffered many injuries as a result of the poor ice condition like two torn ligaments on my ankle and a torn medial ligament in my knee,” he said. “Also, the coaches are all recreational coaches only; nobody has been properly trained for ISU coaching, so the coaching style is very different.”

In order to progress, the young skater had to go abroad. In 2008, he trained in Colorado Springs, USA as he wanted to become a competitive skater.

“I was a Pre-Juvenile skater in 2008 and was training under Janet Champion and other coaches,” said Martinez. “I landed my first triple jumps, triple toe and triple Salchow, in June 2008 with their Russian guest coach Mr. (Alexander) Zaitzev.”

Martinez was deeply impressed by the level of skating in Colorado Springs.

“I thought I could never be the same as the elite skaters,” he recalled. “I was just watching then during the elite sessions since their maneuvers looked so impossible to do.”

He did learn his first two triples, nevertheless. Unfortunately, he lost them again when going back to the Philippines as he was not able to receive professional coaching, but this setback didn’t stop the skater.

He went on to compete in novice competitions in 2009 in Europe.

“I took first place in three out of my three competitions in Slovakia, Slovenia and Austria,” noted Martinez. “After those competitions, I set my eyes on even higher competitions. Even though I was just 13 with just a couple of triple jumps, my mother pushed me to be a Junior skater to have the experience in competing at a higher level.”

Martinez went back to the USA and started to work with Ilia Kulik in December 2010.

“In 2011, we went to the USA again and I had lessons with Ilia for a total of four months,” he confirmed. “So far this year I have taken lessons with him for three months.”

Martinez also went to California in July and August in 2010 to train with John Saita in Anaheim and also a few times with John Nicks in Aliso Viejo.

“Mr. Nicks helped me with triple jumps,” offered Martinez. “The lessons with Mr. Nicks, though, was very limited since his rink in Aliso Viejo was too far from the house we were staying at, but Mr. Nicks was very helpful.”

Martinez, then 13 years old, competed in September 2010 at the Golden West Championship in California, landing his triples and finishing third. Shortly thereafter, he debuted at the Junior Grand Prix in Japan, finishing 17th.

“I was so nervous,” he recalled, “but my mother told me I have nothing to lose, just to gain, from this competition.”

Since then, Martinez has progressed significantly. He was ranked seventh at the Youth Olympic Games in Innsbruck. He considers this event as his highlight of the past season, although he was disappointed with his result.

“I felt so lucky being part of the top 16 young skaters in the world that competed in the Youth Olympic Winter Games,” he said. “I was very proud of my accomplishment; especially as I came from a developing-skating country. Not even our skating federation could believe that I would make it to the YWOG.”

“My final placement was a complete disappointment though,” Martinez continued. “I wanted to finish in the top five, but failed. I was in third place in the short program, but fell to seventh in the free skate.”

“We could not bring my coach, Ilia Kulik, to the competition because we did not have enough money to pay for his fees,” Martinez explained. “Prior to and during the Youth Olympic Winter Games, there was no financial support from our Philippine government, so it was just my mother (Maria Teresa Martinez) who coached me in such a prestigious competition. I was so saddened about it.”

Martinez added that he received a little financial support by the Philippine Skating Federation and Philippine Olympic Committee only after the competition.

Last March, Martinez went on to finish in a respectable 15th place in his debut at the World Junior Figure Skating Championships.

At Junior Worlds he also realized that he needed a triple Axel and triple-triple combinations to be competitive.

“This meant that I would have to train more and harder,” acknowledged the teen. “It also entails a lot of sacrifice and hard work on my part, and more expenses for more lessons, not to mention the sacrifice by my family in terms of time and finances.”

Martinez has set high goals for himself this season.

“The goal is to land two triple Axels in the free skate and to learn a quad,” he announced.

“My ultimate dream is to win an Olympic medal for the Philippines,” he added.

Although figure skating is an unusual sport in his country, the athlete feels that he gets recognition by people at home.

“Whenever they see me on the ice, they are fascinated with the moves, the jumps and spins that I can do,” he said.

In skating, Martinez looks up to Patrick Chan, however, off the ice, his mother is his idol.

“She is a single parent, yet she managed to give us all a good life,” he shared. “If not for her persistence and dedication, I could have not done what I have accomplished in figure skating in such a very short time.”

“I can say that I am a truly “home grown talent” and that I can truly represent the Philippines being born and raised there and having started and skated in the Philippines. Not like other team members that come from another country to the Philippines just for a couple of days to compete during our national championships then leave immediately right after the competition.”

In April 2012, the skater suffered a severe injury, tearing ligaments in his knee.

“I was off the ice and could not jump for two months,” Martinez explained. “I had to re-learn my jumps again, which was so disappointing.”

Martinez’ doctor suggested to the skater that he discontinue the sport due to the injuries he had accrued over the years.

“Then I would start asking myself if what I’m doing is really worth it,” he said. “I had been out of regular school since 2008, and my time had been eaten up by skating and gym and competitions. I’ve learned many important lessons in life through the sport of figure skating, and one is to never give up.”

When asked what he wants people to say about him at the end of the 2012-13 season, Martinez gives a precise answer: “That I deserve to represent the Philippines in the 2014 Olympic Games.