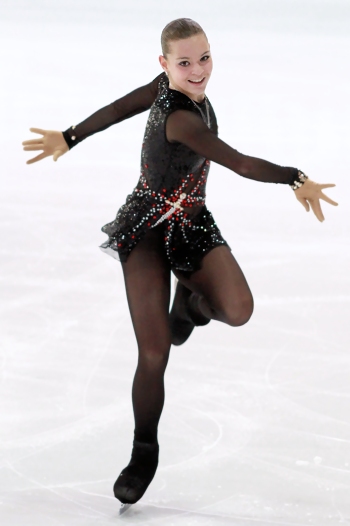 Three-time Russian national champion Adelina Sotnikova is the 2011 World Junior champion, and is currently touted as one of Russia’s big medal hopes for the upcoming 2014 Olympic Winter Games.  The 16-year-old, who struggled a bit last season, has overcome most of her puberty issues and appears ready to attack in her first full senior season.

Sotnikova prepared for the season in various training camps during the summer, but also took part in Mao Asada’s show in Japan, which was very special to her.

“The whole show was very interesting,” said Sotnikova. “I got so many positive emotions. First, it was nice that Mao Asada invited me because not everybody gets invited to such a show. Secondly, meeting the other skaters from the USA, Japan, and other countries was unforgettable.”

“At first it was a little shock because of these stars like (Jeffrey) Buttle,” she continued. “Watching Buttle was a real treat because he skates incredibly beautifully. It was also a learning process for me to work for the audience and to skate in the dark.”

The Youth Olympic silver medalist has prepared two new programs for the season, and feels that she has changed her style.

“This year I decided to change my long program completely,” she shared. “It is a Blues with parts from the movie Burlesque. In the movie, they are all cheerful, enjoy working for the audience, and tell the story of their club. In the footwork I am trying to tell about let’s say, my little world of figure skating.”

Her short program is set to Rimsky-Korsakov’s Capriccio Espagnol.

“It is more, I don’t know how to say it, arrogant?” Sotnikova offered. “I had a (Spanish) show program last year, but this is different. For me, the Spanish music is more serious, more powerful. The footwork is more a tango to a tango beat. I worked a lot on being more with the music, because the music is also important in the program.”

The programs were choreographed by her coach Elena Buianova (Vodorezova) and the legendary Tatiana Tarasova.

“Elena Germanovna (Buianova) put the short program together, and when Tatiana Anatolievna (Tarasova) saw it, she also input her changes,” explained the Muscovite. “They both worked on both my programs.”

The 2011 World Junior Champion enjoys working with Tarasova, although admitted it can be tough.

“When Tatiana Anatolievna comes to our training, she is like my third mom,” Sotnikova explained. “First there is my mom, then Elena Germanovna, and Tatiana Anatolievna. She is a very soulful person. At practice, she might be tough, severe, and can even be angry, but outside the ice she is a completely different person. It is very nice to work with her and to talk with her, and even to tell her what is happening in my life.”

Along with the style of change in her programs, the skater herself has become more mature as well.

“I think I did change in this aspect and I am more grown up,” she said with a smile. “I have to see myself from the outside to know exactly.”

The 2012 Nebelhorn Trophy silver medalist also feels she has developed as a competitor.

“Maybe I am now more focused on a clean performance and am probably better prepared this year than I was last year at the beginning of the season,” she offered, adding that she is still the same person on the “inside”.

Sotnikova went for the triple toe-triple toe in the short at the test skates and Nebelhorn Trophy in Oberstdorf last month, but wants to put in the triple Lutz-triple toe once it is more consistent. She landed it in practice, but missed it in the long program in Oberstdorf. Other elements have changed as well.

“All my transitions have changed because it is a different style and the steps are different,” she explained. “The step sequences are totally new in both programs.”

“Obviously we are changing the steps every year with the new programs,” the teenager pointed out. “I am now getting mileage on the programs and adding difficulty. For me, each of my programs is mine. I feel each program well and I selected the music together with my coaches. Each program is my life.”

At Nebelhorn, she led after a strong short, but the fall on a combination and a single flip cost her the gold medal. She lost to little-heralded Canadian Kaetlyn Osmond by a mere two points.

“I think I will get my act together for the Grand Prix,” a determined Sotnikova said. “One of my goals for the season is to make the Grand Prix Final, but first of all I have to skate well on the Grand Prix.”

The Grand Prix Final is being held as an Olympic test event in Sochi, Russia, which makes it especially interesting. Last season, the athlete won two bronze medals in her debut on the senior Grand Prix, and was an alternate for the Final.

Sotnikova, who turned 16 on July 1, is now age-eligible for the ISU senior-level championships. She won Nationals three times, but it is not a given that she will make the World or European team as competition in her country is tough. Alena Leonova is the current World silver medalist, Youth Olympic Champion Lisa Tuktamysheva now is age-eligible as well, and Polina Korobeynikova finished fourth at Europeans.

There are also some younger rivals such as 2012 World Junior Champion Julia Lipnitskaya and training mate Elena Radionova, who are currently too young to compete at the senior championships.

“The competition is very big,” acknowledged Sotnikova. “All the girls are very strong, here in Russia and also in other countries. I just have to go out and to skate as I do in practice and in exhibitions. Skate for myself, the coaches, the audience and then it is the judges’ decision. I have bigger goals ahead, but I don’t like to talk ahead, so it’s all about getting ready.”

Sotnikova is slated for Hilton HHonors Skate America in Kent/Seattle, Wash., this week and for the Rostelecom Cup in Moscow, Russia, in November.