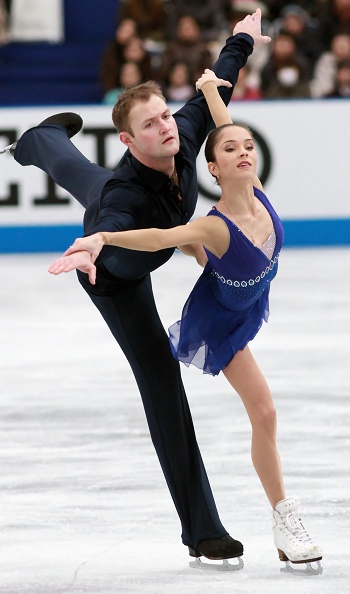 Russia’s Vera Bazarova and Yuri Larionov edged out Kirsten Moore-Towers and Dylan Moscovitch of Canada by less than one point in the Pairs figure skating Short Program at the 2012 NHK Trophy on Saturday. USA’s Marissa Castelli and Simon Shnapir are currently sitting in third.

Bazarova and Larionov gave an elegant, but shaky performance to Liebestraum by Franz Liszt. Larionov wobbled on the side by side triple toe, while Bazarova had to fight for the landing of the throw triple loop. The triple twist and the press lift (with difficult variations) were well-executed and merited a level four, while the backwards outside death spiral only garnered a level two.

“We are glad that everything worked out in our program, but unfortunately it wasn’t completely clean,” noted Larionov. “There were a few smaller mistakes in some elements such as the (side by side) jump. Today, we felt a bit nervous before the competition, although our training went well.”

“We all had a very early morning practice and we are not really used to competing at 12 o’clock,” added Bazarova. “Maybe we weren’t quite awake yet. Also, we had a long bus ride here. It took us 50 minutes and we had to rush our off-ice warm up. Tomorrow we’ll make sure to get on an earlier bus.”

Moore-Towers and Moscovitch looked confident in their playful routine set to Motley Crew, landing a triple toe, triple twist, throw triple loop. The former Canadian champions were awarded a level four on their lift, footwork, and side by side spin, and earned a new season’s best of 65.14 (35.12/30.02) points.

“We were both happy with our performance today,” said Moscovitch. “We felt like we came out with the right attitude. We had a lot of energy and attack in our program.”

“It wasn’t the cleanest skate for us,” he added. “There are a few little things that we still need to clean up.”

When asked about their goals, Moore-Towers responded: “Dylan and I have set a couple of goals for ourselves for this season. As far as skating goes, we’d like to make our programs cleaner and cleaner each time we go out. We’d like to refine some of the simpler things like the death spirals, the spins and the general feeling. We would like to have a placement here that sets us up for Grand Prix Final. We would like to have a good showing at Nationals to hopefully get our title back.”

Castelli and Shnapir landed a side by side triple Salchow, triple twist, and throw triple Salchow in their routine to Stray Cat Strut and Pink Panther to collect a season’s best of 61.85 (33.64/28.21) points.

“Simon and I are very happy with how we skated today,” said Castelli. “We’re always striving to do more, and I know we can do even better.”

“Maybe it was a little stiff and shaky in some spots,” added Shnapir, “but overall, it felt like the performance was right up there with how we have been training at home. We really wanted to go out with a bang today, and I think we accomplished that.”

“Simon and I don’t like to set major goals, but one of our goals would be to make the world team,” Castelli explained when asked about their goals. “We want to improve on our placement at Nationals.”

Anastasia Martiusheva and Alexei Rogonov of Russia came in fourth with 57.07 points for their routine to Cornish Rhapsody. Martiusheva stepped out of the side by side triple Salchow, however, their throw triple flip was excellent. They also completed a triple twist and a level-four step sequence.

USA’s Alexa Scimeca and Chris Knierim are a new team and compete in their first Grand Prix event of their career. They turned in a solid program to Moonlight Sonata which featured a triple twist, throw triple flip, and side by side triple Salchows. The team from Colorado Springs, Col., finished fifth with 54.41 points.

Lindsay Davis and Mark Ladwig, another new American team, were shaky on most elements today. Ladwig stumbled on the triple Salchow, while Davis stepped out of the throw triple loop. They are standing in sixth place at 45.61 points.

Italy’s Nicole Della Monica and Matteo Guarise had an off-day. The double twist and the lift were their only clean elements. Della Monica fell on the side by side triple Salchows and Guarise slipped at the exit of the death spiral, nearly falling.