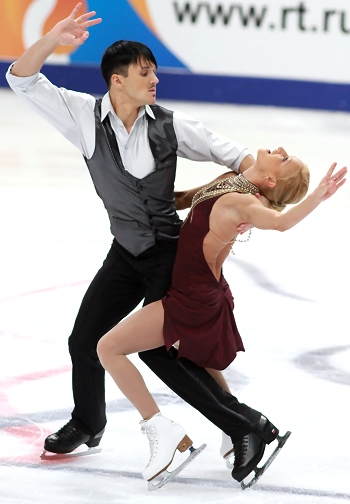 Russia’s Tatiana Volosozhar and Maxim Trankov earned a new personal for their short program to a bluesy arrangement of the “Love Theme” from “The Godfather” at 2012 Cup of Russia.

The 2012 Cup of Russia continued with the Pairs Short Program. In sharp contrast to the Ladies event, this time the hosts were the indisputable leaders. Tatiana Volosozhar and Maxim Trankov currently lead the field by nearly nine points, followed by teammates Vera Bazarova and Yuri Larionov and USA’s Caydee Denney and John Coughlin.

Volosozhar and Trankov set the audience on fire with their performance to a  bluesy arrangement of the Love Theme from The Godfather soundtrack. The team opened with a spectacular triple twist, which received level four from the technical panel, and went on to nail all other elements in their routine. The only flaw was a shaky landing by 26-year-old Volosozhar on the throw triple loop. Several of the judges even thought that she brushed the ice with her free foot.

However, the technical advantage was not the main thing that set them apart from their rivals. The two-time World silver medalists, who have chosen a completely different style for their program, were able to express it perfectly. Everything, from the little hand gestures and transitions in between the elements, to the rhythm of their step sequence, was spot-on in their playful and flirty routine. They earned a new personal best of 74.74 (38.86/35.88) points.

“We are very happy with our performance,” said Trankov, “mainly because it was our best performance of the season. It is not our maximum, though. I know that we can skate even better and earn even higher scores. Still, some things were really good today. We are very happy that we got level four for our triple twist. Previously, it was always level one or two.”

“I think we had a lot of expression in our skating today,” the 29-year-old continued. “We could really feel that we were able to pull the audience into our performance, which was something we have been aiming for. This support is very important for us, especially at home. We need to get accustomed to the pressure of the home crowd with the Grand Prix Final and then the Olympic Games in our country.”

When asked about changes to their training system following a poor performance in the short program at the 2012 World Championships in Nice, the Russian National Champions claimed that they are no longer bothered by that memory.

“It was not about the World championships,” responded Trankov. “We have already put it behind. What puzzled us was the fact that we can so easily do a clean run-through of the short program in practice. We do it pretty much all the time, but once we arrive to a competition we make mistakes. It was important for us to stop this trend and we did it today.”

“It helped, I guess, that we have a different death spiral this year,” he added, referring to their failure to execute the element in Nice. “This one is actually harder, but more importantly, it is different.”

“We do, however, perform the one from last season in the long program. You will see tomorrow that we have even moved this risky element to the first half of the program to make certain that we will be able to do it,” joked the skater.

Bazarova and Larionov, who withdrew from the Nebelhorn Trophy earlier this year, delivered an inspired performance to Liebestraum by Franz Liszt, which was only marred by Larionov’s mistake of putting his hand down on the landing of a triple toe loop. The Russian champions landed a throw triple loop and earned a level four on three of their elements to place second with 66.02 (34.72/31.30) points.

“It was the first event of the season for us, and it was a pretty big one,” said Larionov. “Skating at home always adds a lot of pressure. Naturally, we wanted to do our best and we are very proud of those things that we managed to do well today.”

“We took our time focusing before the start of the performance and we gave it our best,” the 26-year-old continued. “Of course, I made that mistake, but I think I was able to put it behind pretty quickly to move on and continue to skate with a lot of expression and emotions.”

“I would like to thank everyone on our team,” added Bazarova. “Our coaches, choreographers and also our masseurs and doctors. I had some health issues earlier this season, and they did a lot to help me to recover quickly.”

Bazarova claims that she is no longer bothered by the injury which forced them to withdraw from the event in Germany after the short program.

“Since a month or so, I was training at 100 percent and doing all elements in practice,” the 19-year-old revealed.

US Champions Caydee Denney and John Coughlin were clean in their performance to Concierto de Aranjuez by Joaquin Rodriguez, but the team still lacks the polish displayed by the top two Russian teams. They finished third with 59.02 (31.83/27.19) points.

“We are always excited to skate in Russia,” said Coughlin, 26. “Especially now with the Olympic Games in Russia next year, it is a great opportunity to skate in front of the Russian crowd. I hope it will help us to built rapport with them. Our first event was at our home field, which was good, because we did not have to travel.”

“This event was also a great learning experience,” he continued. “We only arrived a day and a half ago after being on the plane for 10 hours.”

“Frankly, our first practice here did not go well at all,” added 19-year-old Denney. “So I am very happy with the way we fought for it today. We did the best we could, and I hope we will be able to skate even better tomorrow.”

The duo spent the time since Skate America polishing their program, and believes that it showed.

“Each day we are progressing,” said Denney.

With the 2012 US Presidential elections making headlines all around the globe, the team from Colorado Springs, Col., was also asked their political preferences, but evaded the answer.

“We work very hard to represent our country on the ice,” said Coughlin. “We try to stay away from politics.”

Canada’s Paige Lawrence and Rudi Swiegers are fourth with 51.86 points, followed by Russia’s Anastasia Martiusheva and Alexei Rogonov (50.90). Both teams made mistakes on the side by side jumps, and the Canadians also had a poor catch on their triple twist.