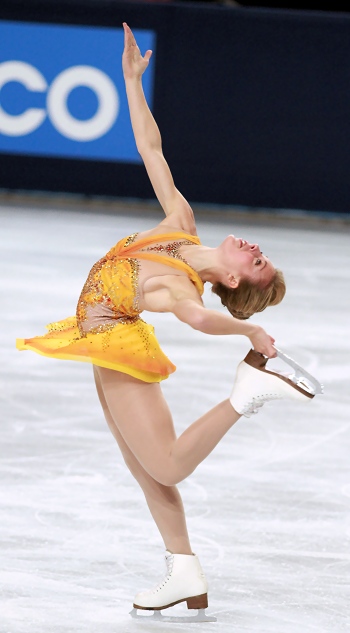 Wagner’s program to Samson and Delilah included a triple flip-double toe-double toe, a triple Salchow, two triple loops (one in a sequence with a double Axel), a solo triple flip, and a triple Lutz (with an edge call). She also earned a level three on two of her spins as well as her footwork.

“Today was a big accomplishment for me, because I went out there and I’ve been feeling sick today,” said the 21-year-old explained. “To be able to accomplish that program when I’m not at a 100 percent was a great for me mentally. I don’t have to be always at the top of my game to perform like that.”

She added that she feels she has a head cold. “I’m not terribly sick, but just not my best.”

Later in the season, Wagner plans to include a triple-triple combination if it is consistent in practice.

Lipnitskaya , who is still battling a sore right ankle, pulled herself together to produce a triple Lutz-triple toe. When she did only a double Axel-single toe, she quickly regrouped and hit the planned double Axel-triple toe-double toe right after that. However, the triple loop was wobbly and the triple Lutzes had edge calls and she doubled the Salchow. The amazing spins, on the other hand, all earned a level four this time.

“It wasn’t my best performance today,” said the 14-year-old. “Hopefully, I’ll be able to skate clean on the free program next time. Right now it is not happening for me. I am glad I was able to compete at all. It was an important experience for me to compete with an injury, but I still could do my triple-triple combination, and I repeated the (double Axel) combination when I missed it.”

Wagner now advances to the Grand Prix Final with two victories and Lipnitskaya should be in as well with a second and third place. Tuktamysheva has a shot, but it will depend on the outcome of NHK Trophy next week.

USA’s Christina Gao put out a solid free skate that contained six triples to move up to fourth at 164.71 points.

Maé Bérénice Méité of France dropped from fourth to fifth. She took a hard fall on her opening triple flip attempt, but made no further mistakes, landing five triple jumps. The Frenchwoman scored 157.58 points.

Polina Korobeynikova’s program to Swan Lake was highlighted by a double Axel-triple toe combination and nice spins, however, the Russian made some mistakes as well: The 16-year-old doubled her flip and a Salchow, stepped out of an underrotated triple loop, and also fell on an underrotated triple Salchow. She accumulated 144.82 points to finish sixth.