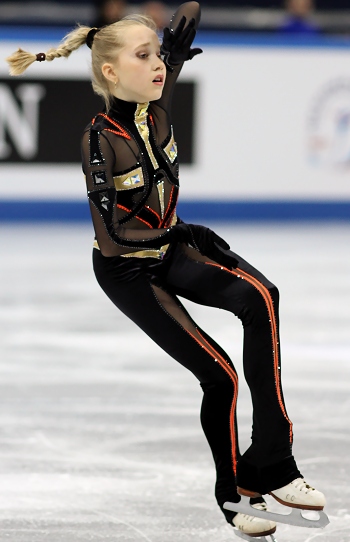 Russia’s Elena Radionova performs to music from “The Fifth Element” soundtrack at the 2012-13 Junior Grand Prix Final of Figure Skating.

Elena, or “Lena” as she is usually called, is a tiny blond girl with a quick smile and a surprisingly grown up way of thinking. Unlike most other kids, it wasn’t her mother, but her father who took her to the ice rink.

“My mother was even against it,” said Radionova. “She said, it was too cold. But I had very weak legs, especially the right leg, and my dad said he’d let me skate to strengthen my legs. So one thing led to the next, and I started to do well and they decided to leave me (in figure skating).”

The then four-year-old girl started training right away under her current coach, Inna Goncharenko at the CSKA Moscow club.

“She stood out immediately,” recalled Goncharenko. “She picked up everything very fast and remembered it. She was little and the most diligent in the group. She worked hard, used her hands, her feet, and did everything as told. A little, light, thin girl, like a dandelion. She is still like this, like a little deer.”

“”Her talent was obvious right away,” the coach continued, “but to guess right away how far it can go… I don’t like to look so far into the future. We take it day by day and work. When she was eight, nine years old, it was obvious that she could do what is necessary.”

The skater has no clear memories of the beginning of her career.

“I don’t remember at all how I started,’ said Radionova. “Some prominent events remained in my memory. When I was little and skated poorly, and also when I skated very well. These bright moments I remember. I also remember exactly that in my first competitions, I took first place right away.”

The teen from Moscow cannot pinpoint at what moment she realized that she wanted to achieve something in the sport.

“I like skating, but there was not a moment that I said, ‘I want (be a champion),'” said Radionova. “Just one thing happened after the next.”

“It’s nice to be a champion of course,” she commented. “It’s nice to win and to have a medal…not everybody gets that. Obviously, you need to have a great desire, but it develops by itself. I just go and work. Sometimes it is not working and you want to stop, but then I tell myself, ‘No way, you have been skating for ten years already. You dedicated half your life already to figure skating’. Then you think, ‘Girl, work hard, you can do everything!’ My coach also helps and supports me.”

Radionova feels that figure skating was the right choice for her.

“I like everything about it basically. Figure skating is dancy and interesting, and it is something special on skates. The jumps are interesting,” she pointed out, adding that she never wanted to be a ballerina or a gymnast. I always think that they are suffering a lot. Ballet is also nice, but not as nice.”

“In figure skating, it is easier to achieve something, because in ballet, there are a 100 people and you will stand in row 35 behind the scenes,” she explained. “To become a prima ballerina is really tough. In figure skating, at least you have chances to skate, to perform in competitions. The ones that don’t jump well can go into ice dance or pair skating, but where can you go in ballet?”

Radionova sometimes watches gymnastics and ballet on TV and occasionally goes to the theatre to see it live.

“I like watching ballet, it is beautiful,” the Russian Junior bronze medalist said. “I also like rhythmic gymnastics, but I feel so sorry for them. They suffer so much.”

The Muscovite enjoyed her international exposure at the Junior Grand Prix events and the Final this season.

“It was a different level of skaters,” she noted. “Not everybody can come here, and it is more interesting to compete. The audience is different, you meet different people, other skaters. It is really interesting. Inside Russia, it feels like you know everybody, but here it is something new.”

It was especially interesting for Radionova to watch the senior level skaters in Sochi. She met the Russian senior skaters and talked to them, but was unable to communicate with the foreigners due to the language barrier.

“I would like to talk to Mao Asada,” Radionova shared. “I would like to ask what Japan is like. I really want to go to Japan one day. Japan and France are my favorite countries. I don’t know why. I love French croissants. I was for the first time in France at the Junior Grand Prix event, but even more so, I would like to go to Paris. And for some reason I feel drawn to Japan. It would be interesting to see how the people are.”

Off the ice, Radionova is attending school, but on a special program for athletes. She is in the 7th class and goes to classes whenever it fits in her practice schedule.

“I study Russian, algebra, geometry, literature, history, geography, physics, and English, but I don’t attend subjects like sports, work, and informatics,” she commented. “I only go to the main classes. There, I study like the others and write two tests as well, but I am just going to a time that is convenient for me. I also study at home with several tutors that come to my house for Russian and English.”

Radionova said she is a good student and especially likes algebra, geometry, and Russian.

In her spare time, she enjoys writing song verses and singing, something that drew the attention of the media at the Grand Prix Final.

“I have a notebook where I write them,” the skater revealed. “I write a line, and I might cross everything out and start all over. I like to work on that when I have time.”

Asked about the content, she giggled: “(They are) about nothing. They are so silly, just about something I might see. I see it and I start to sing. It’s only interesting when I look at them again after a month. I am surprised and I think, ‘Wow, I wrote this.'”

“Maybe I’ll be a singer when I grow up, maybe something will come out of it,” said Radionova. “I really like music.”

Although she likes music, she does not play an instrument as she has no time. If there was time, she’d like to try “playing drums”.

The most important hobby, however, is her dog Martel (called Motchik), a Yorkshire terrier.

“I love him,” the skater gushed. “I do everything for him, what he likes. I dress him. He has a lot of costumes. I get him all kinds of clothes for summer and winter, like T-shirts. My mother walks him in the morning when I am training, but I walk him in the evening and I bathe him.”

Radionova has on-ice training for a total of three hours on most days, split in half at 9:30am and 2:15pm or 3:15pm. During the time in between, the skater goes to school, has a lunch break, and rests. She stretches and goes to choreography classes after afternoon practices on most days of the week. Luckily, she doesn’t live far from the ice rink.

On the ice, the Junior Grand Prix Final Champion often meets Adelina Sotnikova, who enjoyed the same success as a junior.

“I have a good, friendly relationship with Adelina,” said Radionova. “We don’t spend our time together on the days off, but we are socializing without any negativity. I like to train with her. You go out and think, ‘It’s cool to skate with Adelina’. Not just cool, but you want to skate right away. You feel you belong to this group. When she is there, I do even more and I jump better. When I am with others in a group that are a little weaker than I am, I am relaxing anyway.”

The young skater describes her character as friendly and positive.

“I never feel any malice towards others,” she stated. “I never felt envy towards others. Thank God, I don’t have that terrible character trait. I am always composed and it is not easy to surprise me with something. I think you can achieve everything when you work hard for it and want it. I am a good-natured person. In some situations, I might not want to give in, and I show a fighting spirit. I can argue with someone, get loud, but then in five minutes we’ll make peace and everything is ok.”

“She is a good-natured person,” coach Goncharenko agreed. “She is very smart. She’s got a clever mind, but she is sensitive. She might give in to her emotions and you have to talk to her, but then she pulls herself together.”

For the rest of the season, Radionova has set her goals high.

“I’d really would like to win the Junior World Championships,” she said. “Maybe it is possible to make the top three, but I really want to win. And to be on the podium at Russian Nationals (senior level). These are my most important competitions.”

Radionova would also like to compete with the seniors next year.

“To try at least,” she said. “I like to skate with them. You watch them and they are skating better and faster than you are, so you are drawn to them. You want to be like them or even better. My skating is still kids’ skating, everybody according to his age. I can’t yet skate like them. I need to work more on my skating skills. I am still small and I need to grow a little and it will look different. The other girls grew up and they look different on the ice, so graceful.”

Her next competition is the Russian Figure Skating Championships (senior level) December 25 to 28 in Sochi.