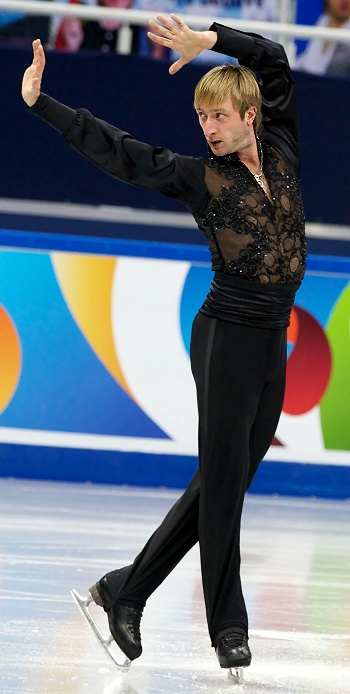 Russia’s Evgeni Plushenko is arguably the most recognizable figure skater in the world. Yet, one year before the Olympic Games in Sochi, the 2006 Olympic Champion and two-time Olympic silver medalist remains the dark horse in the race for the 2014 Olympic title.

This will be the second “comeback” for the 30-year-old student of Alexei Mishin. He took a break from competitive skating following the 2006 Olympic games, which enabled him to recuperate from knee injuries that had been plaguing him.

The skater returned in 2009 to win gold at Cup of Russia, the 2010 Russian Nationals, the 2010 European Figure Skating Championships, and a silver at the 2010 Olympic Games. He withdrew from the 2010 World Championships, citing injury, but soon began skating in exhibitions which resulted in the loss of of his amateur status. He was later reinstated by the International Figure Skating Union in June 2011.

On his second return, Plushenko won the 2012 Russian National Championships, followed by a victory at the 2012 European Figure Skating Championships. He missed out on Worlds as he underwent knee surgery on February 23.

This September, fans rejoiced when the veteran skater produced two different quads at the National Team Test Skates: a toe loop, which has been his money jump for years, and a Salchow. However, it turned out that it was one jump too many.

“I have attempted too many jumps early in this season,” admitted the skater after the short program at the 2013 Russian National Championships. “I started to land quad Salchows, began working on the quad Lutz… I am not young any longer.”

The workload exacerbated an existing spinal injury, and he was forced to make an unplanned trip to Munich for an emergency surgery.

“It almost feels like going home,” joked Plushenko, who at the age of 30, and days before becoming a father for the second time, combines a Zen-like detachment with a sense of invincibility that would make any teenager proud.

“It was a thermal treatment of a disk hernia,” he explained about the surgery. “They make a cut, enter a catheter, and can follow the process on a monitor. Surgeons sear the hernia with a special liquid under general anesthesia. You are not allowed do anything for ten days. I was back on the ice in seven.”

“After the surgery, the doctors told me to stay off ice for a month,” he added. “However, it was not for me. As usual, I had to jump the gun. I felt that need to run fast in order to defend my position. I had the National Championships coming up, so, not only did I start to train too early, but I started to train too intensely.”

As a result, complications arose which required another medical intervention, this time closer to home.

“I got an injection, a block, in St. Petersburg at a presidential clinic,” he said.

“I am a grown up man, but I cried in practices because I was not able to do anything,” revealed the three-time World champion. “I was not able to land a triple loop, triple Salchow, or triple Lutz. I had to start from the scratch. All the progress I had achieved this summer … it was gone. I felt like giving up.”

Only the support of his closest circle kept him going.

“The support of Alexei Mishin, David Avdish, and Vitaly Balykin helped me a lot,” said Plushenko. “My mother even started to attend my practices again. It was due to them and to my wife, who will soon give birth to our son, that I found the strength to carry on.”

He would also like to thank his fans. “I also would like to express gratitude to all of Russia that loves figure skating and loves Plushenko. It makes me stronger.”

Another motivation was a sense of obligation.

“I had four shows scheduled in Europe,” he explained. “The contracts were already signed and there were people to whom I owed a decent performance. So I had to overcome myself one more time and skate well at those exhibitions.”

“This gave me a chance to skate my programs,” he continued. “I did not perform exhibition numbers. I intentionally did the short and the long. Four times each. Naturally, at the time, I was not able to spin properly. I was not able to skate at full strength, but it helped me anyway. Without those shows, I doubt I would have been able to prepare for the Nationals. For the first time I landed a couple of triple Axel and some other triples [at the shows], and it gave me some confidence that I would be able to perform at the Russian Nationals.”

“Mine was the last word, though,” he stated. “I have had a very long career. I have learned to listen to my body. If I feel I can do a quad, naturally, I will take the risk. I was able to land my quads in Sochi, so it was only in the last three days that I started to work on them again. It is not consistent, yet, not at all, but it was my decision. I needed to feel the ice, to warm up, to see how it goes.”

The risk paid off for the skater in both the short and long programs at the 2013 Russian National Championships.

Quads remains a focal point to the skater, who once proclaimed that men’s single skating is impossible without them. To give credit where its due, Plushenko still upholds this opinion even in the face of his own failing health, as well as in the progress achieved by his rivals.

“The situation has improved a lot,” he said about the current level of men skating. “Lots of guys are doing quads these days. In a sense, it is a return to what we started with Lesha (Alexei) Yagudin in our time.

“Two quads in the long; we used to do it, but then there was a break,” he said. “When we were young, two quads were the norm. Figure skating was different. Of course, spins were easier, step sequences were nowhere as long, and there were no transitions, but the technical level was very high. The slightest mistake on a quad and you were out of contest.”

“So I like the current situation a lot,” he continued. “I am grateful to skaters who created it by doing quads. Yuzuru [Hanyu] does two quads, Takahiko [Kozuka] does two quads, [Daisuke] Takahashi does two quad, everyone is doing going two quads. The guys I saw at Nationals were aiming for two quads in practices. It is great.”

Plushenko’s courtesy towards fellow team members only extends that far, however.

“The guys have improved a lot,” he said. “Following their practices here, I was very impressed,” he said, while trying to avoid answering questions about their chances on the international stage. When pressed for answers, he said, “I can say a couple of words about their chances, but I won’t.”

The next stop for the ten-time National Champion is another visit to a doctor’s office.

“This was the most important National title in my career,” he said. “The circumstances were very difficult. I wanted to withdraw. Or, more accurately, to withdraw would have been a right thing to do at the time. So, now I will take a short break and I will have another injection in St. Petersburg and let the doctors work their magic on me.”

“Then I will prepare for the Europeans,” he continued. “The rivals will be strong, so I have to bring back two quads and a quad-triple combination. I think my muscles are up to the task, but everything depends on my back now.”

Plushenko claims that he feels no pressure from the Russian Figure Skating Federation.

“We have a great relationship,” he stated. “We will work things out. If am healthy enough, I may even make a trip to London, but health is the priority right now.”

When asked how he was able to endure nationals last week, the seven-time European champion immediately explained: “The atmosphere at the competition! I did not compete for three years. I have tried many other things. I played football, hockey, tennis, and golf, but in no other sport discipline did I feel like I had to step forward and prove that I am the best. I guess it is something inside me and I like it. I enjoy overcoming obstacles, overcoming myself, doing something new. I want to be in the Guinness Book of Records! I have a dream to compete at the fourth Olympic Games and to step on its podium!”

His choice of words led a journalist to ask him if he feels that he has started a self-fulfilling prophecy when, on the eve of the 2010 Olympic Games, he said in an interview that he would be satisfied even with a silver. His answer was that he merely spoke the truth.

“It was a comeback, a first one for me,” he explained. “I know some athletes of the past, great athletes, who came back and never won any medals again. I believed that a medal of any color would be a major victory.”

“What I was not prepared for,” he quickly added, “was to lose with a strong performance. It felt like I was stabbed in the back. It was hard, but it’s all in the past now. I prefer to look forward. I already see myself at the next Olympic Games. This time I truly would like to say ‘there, I’d be thrilled to win a medal of any kind’. So if the judges are truly hanging onto my words, I would like them to hear this.”