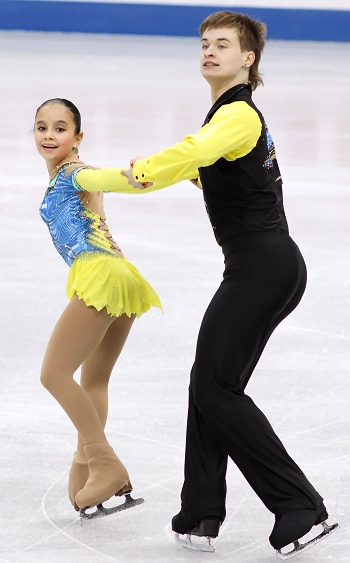 Russia’s Lina Fedorova and Maxim Miroshkin perform to “Singin’ in the Rain” at the 2012-13 Junior Grand Prix Final of Figure Skating.

Fedorova and Miroshkin had chosen the famous Singin’ in the Rain soundtrack for their short program this season, and make full use of the light-hearted character of the music. The 14-year-old Fedorova was especially good at matching the charming tune.

Technically, the skaters, who train alongside Tatiana Volosozhar and Maxim Trankov, were quite sound, but their side-by-side double Axels were out of unison. The team also only earned a level one for their death spiral, and then Fedorova unexpectedly exited the final spin, which featured side-by-side Biellmanns, before her partner.

“It was very unexpected, it happened just by accident,” she explained. “After the death spiral, I was telling myself that I have to keep my focus, that there are still two elements left. I managed to do it almost until the end.”

The team from Moscow posted their new personal best of 54.37 (28.86/25.51), but was not particularly impressed by their own performance.

“We could do it better, but now we are satisfied,” said Fedorova. “We had butterflies in our stomachs. I can’t say this performance was the best in the season.”

“I can’t say I was afraid, but I was rather nervous,” agreed her 18-year-old partner. “As our coach says, without emotions you don’t have good results.”

“We train on the same ice with Trankov and Volosozhar, and they help us to progress, he added. “They give us as a lot of advice. For example, once I started to fuss on the ice, tried to do every little thing better than before. Maxim came up to me and said, ‘Max, you can only do so much and no more’. I settled down after his words.”

Purdy, 17, and Marinaro, 20, arrived in Sochi as the highest ranked team, having won both qualifying events, but in Russia Purdy unexpectedly fell out of a double Axel landing.

“Just a little stumble on the landing. It wasn’t a big thing,” Purdy later explained. “I should have stuck to the landing, but that’s how it goes.”

This mistake, combined with low levels of difficulty on their death spiral and double twist, cost them points. However, the quality of their material, as well as the maturity they displayed in the execution of the elements, has set them apart from the other teams.

“We feel excellent,” said Marinaro about their performance. “We got a personal best, which was our goal today and we achieved that. A couple of little mistakes, but overall we’re very happy with how we skated today.”

The team was not upset with not being in the lead, though.

“We are very comfortable where we are,” said Marinaro. “We have been doing this (catching up) all season.”

The former Canadian Junior champions, who have been competing on Junior Grand Prix circus for several seasons, was able to qualify for the Final for the first time, and attribute the success to experience.

Davankova and Deputat were clean, but also received low levels for difficulty for their twist and step sequence, which were graded level two, while their death spiral received level three. They picked up a personal best score of 51.34 (27.52/23.82) points.

“I worked with jump coaches since our last Junior Grand Prix event (in Croatia), and in general we focused more on jumping skills,” said 14-year-old Davankova. “In part, the problems earlier in the season were caused by the fact that I grew up a lot, but I am trying to get used to it. I have to, since I doubt that I have stopped growing up. I won’t be 1.55m forever.”

“We are quite happy with the performance,” added her partner. “I think the only issue was a side-by-side spin which was not exactly in the unison.”

The Russian Junior champions, who only started to train together last season, did not participate at the Junior Grand Prix (JGP) events before this fall even though they had won a bronze medal at the ISU World Junior Championships.

“Even though we have already been to Junior Worlds, competing at the ISU Junior Grand Prix series is a big deal for us,” said Deputat, 19. “We were very nervous, actually. The Junior Worlds was like ‘Oh, cool, we are going to the Worlds! Let’s have fun’, but now we feel certain pressure. We feel that need to prove that we are a leading team and will remain one.”

For now they will focus on immediate future.

“For us, the real test will be the free program,” said Davankova. “We always do relatively well in short programs.”

The team is closely followed by fellow JGP debutants Maria Vigalova and Egor Zakroev. The team from Perm had a couple of tight spots in the program, but avoided any major mistakes. Even though Vigalova, who at 13 years of age is the youngest competitor in the Final, sometimes have trouble keeping up with her 18-year-old partner, she has charisma to spare, which shined all the way through their performance to the “Capone” soundtrack. They scored 50.76 (26.83/23.93) points.

“We had mistakes and these mistakes were really ridiculous,” said Zakroev. “We didn’t do them at the practice sessions. It’s been jitters that played a dirty trick on us, but the first part of the program was really nice. We did good throws and spins. The technical elements that we’ve performed well at the training sessions were equally good on the ice.”

“Sure, we hoped to qualify for the Grand Prix Final, but nevertheless, it was a surprise,” he added. “The Grand Prix Final is a competition where the world’s best six pairs take part, so it’s a real challenge to get there. We are physically ready to compete here, but morally we are still very nervous.”

China’s Xiaoyu Yu and Yan Jin posted the second highest technical score of the night, but the 2012 World Junior silver medalist seemed to have fallen out of favor with the judges, finishing fifth with 50.34 points.

“We are happy with our performance today,” said Jin. “Our goal for the free program is to skate better than anyone else.”

“I think other than the obvious problem in the program with the double Axel, everything else we skated well,” said Beharry. “The lift was smooth, the throw was good. It was overall pretty good. Just that one little error.”