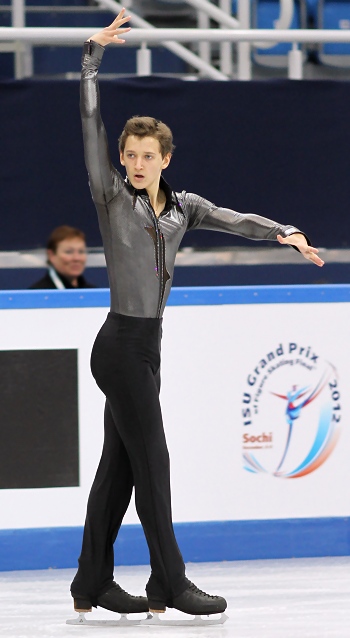 Maxim Kovtun of Russia performs to music from “Casablanca” at the 2012-13 Junior Grand Prix Final of Figure Skating.

The first medals of the 2012-13 ISU Junior and Senior Grand Prix Final of Figure Skating were decided in the Men’s Junior division. Russia’s Maxim Kovtun moved up one spot to capture his first major Junior title, while USA’s Joshua Farris slipped to second place. Japan’s Ryuju Hino moved up from fourth to capture the bronze.

The 17-year-old picked up only one negative Grade of Execution (GOE) in his entire routine set to the Casablanca soundtrack when he received an edge call on his triple flip attempt. He also had issues with low levels of difficulty on his spins, none of which received a level four.

Nevertheless, these technicalities were barely noticeable to anyone except for the technical panel.

A broader look at his performance showed that the student of Elena Buianova and Tatiana Tarasova was nearly perfect, nailing his quad toe-triple toe and two triple Axels to place first in the long with 149.78 (79.80/69) points. With a new personal best of 222.31 points overall, he moved up from second to capture the gold.

“Of course, I’m satisfied with this performance,” said the Russian Junior bronze medalist. “Today, I did not attend the morning practice because it was too early [at 6:30 AM]. I would have been too tired had I went to it. I decided instead to stay in bed longer and then warm up harder.”

The skater said that the only words Tarasova said to him after the performance was “Thank you”.

“She still doesn’t know that I have a level one for the combination spin,” he added.

Like many other skaters before him, the Russian finds it easier to catch up with his rivals than to lead them.

“The best thing was finishing in second place yesterday,” the 17-year-old explained. “To be in the first place after the short program is a huge responsibility. My legs would have been shaky, I would have panicked. This way, I felt relaxed today and I skated for my own pleasure. I only got tired toward the end of the program.”

By the time of the press conference, Kovtun still had not wrapped his mind around his success.

“It just hit me what happened,” said Ekaterinburg’s native. “It wasn’t entirely a surprise, but it was unexpected. Skating on home ice, with all the support… I don’t know what will happen in the future, but I am extremely happy now.”

Farris told the press yesterday that he was capable of much better focus nowadays and that it should prevent him from missing the top of the podium again. Unfortunately for the American, this time it was his body rather than his mind that let him down. The skater is allergic to dairy products and travels with his own food, but it turned out that the soup he brought with him contained some milk.

“I am actually happy, you know,” he said after his performance. “I don’t know if anyone has noticed, but I am definitely weary. I had to take Benadryl (antihistamine) two hours ago, which totally knocked me out. I did pretty good for how I felt.”

The student of Christy Krall and Damon Allen started strong, nailing a triple Axel- triple toe, but then crashed on his quad toe loop attempt and then stumbled out of a triple Lutz. Although he recovered to to produce good spins and footwork, his final three jumping passes were flawed.

“I fell on a quad and hit the boards and hurt my hip,” he said after he limped out of the kiss-and-cry area. “It took me a couple of seconds to get back into my program, but then I lost it again.”

When asked what he learned from this event, he joked that he needed to “pay attention to the ingredients a little bit more.”

Despite an obvious disappointment, the World Junior silver medalist remained optimistic overall: “The Final is the Final. I learned that if you do well at JGP events, there is this kind of bonus round. It’s like icing on the cake. I skated a little bit worse than last year, but I still improved my placement, so I cannot be too disappointed about it. I hadn’t had an allergic reaction in a little bit. I don’t know, somehow I am having bad luck with it.”

Hino once again proved his tenacity as he left both media and specialists scratching their heads trying to figure out how he managed to hold the landings of jumps which were so obviously off-axis in the air. The judges marks reflected their puzzlement as well: he mostly got strings of zeroes as his GOEs, which translates as ‘done, but not especially well’.

“Yesterday I had mistakes and I am surprised to skate better today,” stated the student of Hiroshi Nagakubo. “The main thing is that I was able to control my emotions and that’s why I did well and went into my jumps with confidence.”

“I still can’t believe the placement,” added the 17-year-old from Nagoya. “I can’t believe that I’m sitting here [at the press conference] with the other two skaters [Kovtun and Farris]. It’s surreal to me.”

“Nothing seemed to be going right for me recently,” the Japanese explained. “I had major events one after another. Every two weeks I had an event. In such condition, compared to the other competitors, I knew I was going to make mistakes. I had nothing to lose. I need to make sure that I am getting enough rest. I was happy that I did well in today’s performance in the condition that I am in.”

Brown was unable to reproduce yesterday’s success with triple Axel. Instead of more common mistakes, like falls or step outs, the student of Kori Ade simply did not take off the ice at all, abandoning the jump on its entry curve.

“I don’t know what has happened,” the 17-year-old later said. “It’s something that I need to learn how to do. Probably it’s because of being under pressure with this (media keeping close watch on his Axels) before skating. I really tried to get over of what has happened… pretend like everything’s the same and just take one element and time, and it helped.”

The defending champion skated pretty well for the rest of the program, making only one mistake when he fell out of a triple Lutz landing. However, the mistake was costly as he missed the podium by 0.6 points (198.32).

China’s Boyang Jin rose up from sixth to fifth place with a charming and courageous performance to a Charlie Chaplin medley. The student of Zhaoxiao Xu attempted the most ambitious program of the night, aiming to land two quads and two triple Axels, but only half of them were clean. This is still quite an impressive achievement for the 15-year-old, who scored a total of 187.95 points.

“Today I skated better than yesterday, but I still made mistakes,” noted the teen from Harbin. “I missed the quad because I didn’t have enough speed going into it.”

The debutant believes that the experience of competing at the Grand Prix Final, which combines Senior and Junior events, is invaluable for him.

“I need to watch the Senior skaters and learn from them. My favorite is Yuzuru Hanyu because he is also very young,” Jin shared.

Keiji Tanaka of Japan finished sixth in the Long Program and sixth overall. In contrast to his upbeat and slightly eccentric Short Program, his long, set to soundtrack of The Untouchables, was dramatic and powerful. However, he struggled with his jumps and only earned 174.55 points overall.

“The triple Axel is the most difficult jump for me,” said the 18-year-old, who begun his program by falling out of its landing. “I have been concentrating on it too much (today). I stumbled and it did not work out. I had mistakes in both programs, and I have been thinking through my jumps before the competition.”