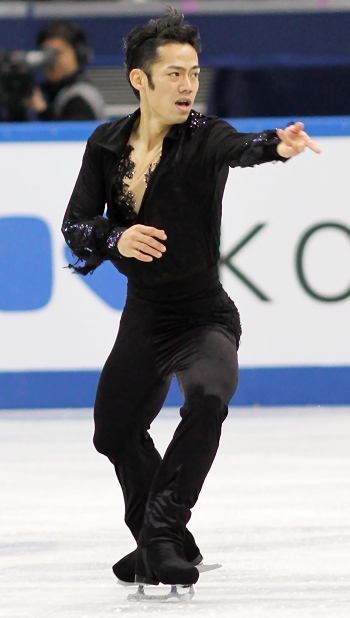 Daisuke Takahashi is Japan’s most decorated male skater in history and has just added another historic title to his impressive resume: He became the first Japanese man to win the ISU Grand Prix of Figure Skating Final earlier this month. His other “firsts” include: first Japanese man to win Worlds (in 2010), to take an Olympic medal (bronze in 2010), and to become World Junior Champion (in 2002).

In Sochi, on Olympic ice, the now 26-year-old took another step towards his ultimate dream, the Olympic gold medal. His victory in the Final should give him confidence, but Takahashi, as always, does not give a simple answer.

“I don’t know if I should say that I gained some confidence or not, but I would like to make this into a confidence,” he said. “Of course I’m happy with the placement and the final result. Obviously another first for the Japanese men I was able to be involved in,”

But for the Olympic bronze medalist, the most important moment about his free skating in Sochi was that he landed the second quadruple toeloop.

“During this season, and after my injury even in practice, I wasn’t able to land my second quad, but I was actually able to do that,” he pointed out. “I think that will be another boost and hopefully will build my confidence. Now I know that I can do it. I think it’s another step forward.”

A record number of four Japanese men (plus Canada’s Patrick Chan and Spain’s Javier Fernandez) competed in the Final, and Takahashi was the oldest skater among them. After his lead in the short program he jokingly said that he doesn’t want to lose against the “younger guys”. While he didn’t lose to them, he feels that he didn’t really beat them either.

“I won, but I was placed third in the free skating,” he pointed out. “I couldn’t beat them. I know what my challenges and my issues are and I hope the lessons learned here make me improve further.”

It’s not just about winning or losing for the multi-Japanese champion.

“It’s more about the whole flow of Men’s single skating, the trend,” he explained. “I don’t want to be left behind. I want to keep up with that pace. I don’t want to start late so that I won’t be able to catch up. I think now I’m still standing at the same line with the others, and hopefully I was able to show that I’m still there with them.”

His next stop is the Japanese Nationals that will be held this week in Sapporo.

“I am a little concerned about my stamina, so I shouldn’t work too hard,” he shared. “I need to adjust my performance and hopefully nail the two quads and improve my Axels.”

“I hope to enjoy the venue and the atmosphere at Nationals,” he added regarding his preparations.

He’ll face Yuzuru Hanyu, Takahiko Kozuka and Tatsuki Machida who were with him in the Final, plus other competitors at Nationals. Takahashi not only wants to secure his spot on the World team, but also hopes to be able to compete in the Four Continents Championships in February as they are held in his hometown of Osaka.

This spring, Takahashi caused a little stir when he and Nikolai Morozov announced that they would renew their collaboration. Takahashi trained under Morozov until 2008, but then they split, and not in the most amicable way.

“Of course it wasn’t a clean good bye, but now that we are back together, it makes you wonder sometimes if we really had that bad moment,” he said. “We’re trying to build confidence, and of course I want to have a good confidence and trust with him, and I think we’re trying to work on that, too. It’s started to crystallize a little bit. I think this is what we are starting to see.”

The Japanese skater is continuing to work with long-time coach Utako Nagamitsu as his main coach, but also works with Morozov in training and in competition.

“There are some small changes in the training,” he acknowledged. “It’s not that I have something specific or an agenda that I’m expecting of him (Morozov), but it’s more about working together. He asked me if we want to work together to aim for the gold at the Olympic Games, and it if doesn’t work out, that’s fine. Unless you try it out you can’t really tell if it works or not.”

“He thought that I could be able to win the gold medal,” Takahashi continued regarding working with Morozov. “He approached me, meaning that he has high expectations. I want to at least respond to these expectations. I’m being tested within that context of a relationship and that tension is a good tension that I need. That tension helps me and hopefully it will continue like that.”

Takahashi is not sure at what percent his current ability is.

“Well, I don’t know how far I could reach, so I can’t really give you that answer,” the reigning World silver medalist responded. “I’m always thinking, this is it, this is my limit, but everybody around me is saying, ‘no, you can go further, push the boundaries’. I would think maybe I can. If I’m practicing, I want to have that feeling that I can do a little bit more than what I’m doing now. I wonder where I am and how far I’ve come.”

Takahashi enjoyed his experience in the Olympic venue at the Grand Prix Final in Sochi.

“First of all I got to know the Olympic rink and venue, and if I take part in the Olympics, that will work as a plus,” he pointed out. “Even if the warm up area and other areas are different, at least I know (the place).”

And he felt inspired by being in Sochi.

“I must say by knowing this venue, I started to feel a little bit that I would want to come back here. I won’t deny that this (feeling) exists,” the Japanese skater noted.

“Of course, ideally, it would be nice to retire here (in Sochi),” he revealed.

This has to do with the fact that Russia holds special meaning for him.

“For me, Russia meant a turning point,” he explained. “Of course at Worlds in Moscow (2011), I made a major mistake and was falling apart everywhere (screws came loose on his skating boot and he had to stop, and finished 5th, T.F.), but that’s when I decided I really want to take part in the Olympics. It was two years ago in Moscow when I said, ‘okay, I want to try for Sochi’. Hopefully this place will have special meaning for me in the future, saying that’s where my last performance was.”

And what does he want to do once he retires?

“Coaching or teaching,” he said. “I want to be involved in skating in some form or the other.”

However, he doesn’t see himself as a show skater.

“I won’t have much focus on my skating anymore (when I retire),” he explained.