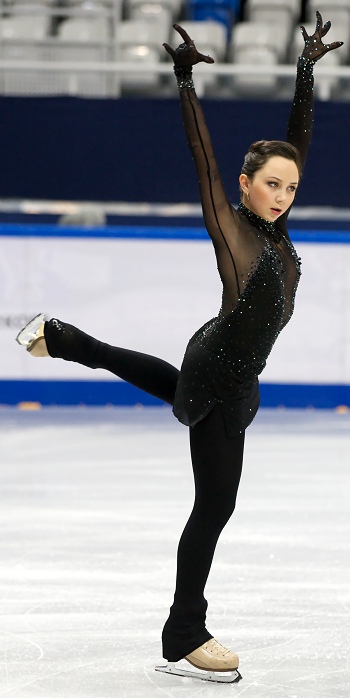 Tuktamysheva finally broke a curse and nailed all jumps in her Adios Nonino tango. Somber and intense, she produced a solid triple Lutz-triple toe loop combination, triple loop out of steps, and a double Axel at the very end of the program.

“Finally, I was able to do everything,” the skater breathed in relief after the end of her performance.”

The 16-year-old is keeping good track of her rate of success. When she was asked how long it had been since she skated a clean short program, her answer was immediate. “I skated a simplified version of it at a small competition in St. Petersburg in the beginning of this season, and the last clean performance of a real short program was at the Youth Olympic Games in Innsbruck last winter.”

The 2012 Youth Olympic Games Champion only earned a level three for two out of three spins, but she still was awarded the highest technical and presentation scores of the night to earn 69.50 (36.53/32.95) points for her mature and sophisticated interpretation.

“I am very happy with my performance,” she told the press. “It was one of the best performances of my career. I am overwhelmed with emotions and I can only hope that I will be able to focus equally well for the free skating tomorrow.”

The student of Alexei Mishin had to battle pain in her leg, but claims that she has already gotten used to it.

“I feel well,” she said. “The leg still bothers me a bit, but I guess I have already adapted to this pain. During the performance, there such a flux of adrenaline that you do not feel it any longer!”

Still, the 2011 Russian silver medalist was cautious in her preparations for the championships.

“I have been taking my time,” she explained. “I had some regular practice sessions. I took some time off after the Final and gradually started to train again. My mood was completely different, though, and practices before the nationals were much more productive than the ones before the Grand Prix Final. I was more confident.”

The skaters had to overcome an unusual challenge before the second day of the event: at 2:30 am there was a minor earthquake in Sochi region.

“Yes, I noticed it,” admitted Tuktamysheva. “I woke and thought that it was weird that things were moving, but I have spent so much time commuting by trains between Glazov and St. Petersburg that this fact did not bother me too much and I went back to sleep.”

Skating in the first warm up group, Sotnikova was a bit tight, but the three-time Russian champion got the job done. It was the first time a major competition this season in which she landed all jumps, including a triple toe loop-triple toe loop combination and a triple flip out of steps.

“I am quite happy right now,” said the 16-year-old. “I have finally skated clean. I hope to be equally competitive in the free skating tomorrow.”

Technically, there were some minor issues in her performance. The teen from Moscow fell out of a Biellmann position in the layback spin (which received a level three) and her final combination spin was also graded a level three.

“The spins were not up to my usual standards,” Sotnikova admitted. “I believe I was too overwhelmed after landing all the jumps. I think it was the cleanest performance in a very long time.”

More noticeable, however, was the caution and focus the student of Elena Vodorezova-Buianova employed until her jumping passes were done. Only then did she allow herself to relax and truly express the character of in her complex Capriccio Espagnol routine. She recevied 66.99 (34.42/32.57) points.

“I hope I will be calmer during the free skating tomorrow,” she added. “I have already proved myself. I did everything I set out to do today. I hope it will be equally easy to skate tomorrow.”

The skater said that she slept through the earthquake. “I did not feel anything at all. I guess it means I sleep like a log. My roommate, Katya Bobrova, woke up in the middle of the night because of the earthquake, but she decided not to wake me. At least I got a good night sleep.”

It was Sotnikova’s first time in Sochi.

“I was very calm and I treated this venue like I treat any other,” she said about the experience. “It was a pleasure to skate here. On the first day during practices, I thought that the ice was too soft. I did not like it at all. However, today it was completely different, but I do not want to jinx it!”

Radionova was strong in her interpretation to music from The Fifth Element soundtrack, but she brushed the ice with her free foot after the first jump in a triple Lutz-triple toe loop combination. Her other jumps were clean and she picked up the second highest technical score of the night to finish third with 64.58 (36.13/28.45) points.

“In principle, I am happy with my performance,” said the 13-year-old. “Except for the Lutz-toe loop combination, it was not my best. I can do it much better. The rest of the program was stronger than in practices, so I am happy.”

“Naturally, I would like to win a medal here,” she responded when asked about her goals. “I want to be a member of the national team and to prove myself is very important. Last year, I was fifth, but the level of rivalry is very high.”

“I took some time off,” the 2012 ISU Junior Grand Prix Final Champion said about her practices in the last two weeks. “I tried to maintain my jumping skills, but I was mostly working on basic skating skills and spins. In essence, it was regular, everyday work.”

Polina Korobeynikova displayed a lot of improvement in her interpretation of Nino Rota’s Romeo and Juliet theme. Technically, the 16-year-old was also quite strong, landing a triple toe loop-triple toe loop combination, but she later fell out of a triple loop landing. She finished in the fourth place with 60.85 (30.93/29.92) points.

“Overall, I am quite happy, despite the mistake on the jump,” the student of Viktoria Butsaeva said. “Naturally, I would like to qualify for the European championships, but I am not in my best shape right now.”

“This season was quite difficult for me,” Korobeynikova explained. “At first I was injured, then I also grew up a bit, which affected my balance. I am on the recovery track, though. I work hard and I hope that I will be able to deliver a good performance tomorrow.”

Anna Pogorilaya continues to skate well. In Sochi she laid down another clean short program featuring a triple Lutz-triple toe loop combination and a triple flip out of steps to finish fifth with 60.45 (34.02/26.43) points. She was the last skater to score above 60 points.

Alena Leonova began her performance to Jai Ho with an impressive triple toe loop-triple toe loop combination, but she fell after a triple flip and opened her double Axel in the air, only landing a single. Without an enthusiastic crowd to get behind her every move, the skater tried her best to deliver her entertaining routine to the maximum impact, but the lack of feedback combined with obvious disappointment after two mistakes led to an under whelming outcome. The 2012 World silver medalist rounds out the top six with 59.67 (28.10/32.54) points.

“I do not understand what happened,” said the student of Nikolai Morozov. “The first jump was great and usually it sets the mood for the entire routine. However, today it all fell apart, I made two different mistakes. I cannot even blame it on the lack of focus. I will have to discuss it with my coach, because I cannot understand what I did wrong. Before the Axel I almost fell because I perform the jump from a difficult entry.”

Evgenia Gerasimova nailed a triple Lutz-triple toe loop combination and a triple flip in her elaborate routine to The Barber of Seville by Rossini. She is currently seventh (59.57).

Nikol Gosviani, a last minute addition to the roster, finished eighth (57.77) with a soulful performance in which the student of Alexei Urmanov seemed to express every note in her music. She landed a triple toe loop-triple toe loop combination and a triple flip out steps, but received low levels of difficulty.

Serafima Sakhanovich, a senior national debutant, proved to be a precocious competitor. After she fell out of her opening triple Lutz, the student of Alina Pisarenko added a triple toe loop to a triple flip later in the program. The 12-year-old earned 56.50 points for her efforts and finished ninth.

Alsu Kayumova rounds up the top ten (53.89) and the list of skaters who successfully performed a triple-triple combination. In her case it was a triple flip-triple toe loop combination.

Sofia Biryukova, who competed at two ISU Grand Prix events this fall, stepped out of a triple toe loop and fell on a triple loop to finish 17th (46.98).

Yulia Lipnitskaya, who won silver at last year, withdrew from the competition. The 2012 World Junior Champion still has not fully recovered from the fall she suffered in practice on the eve of the 2012 ISU Grand Prix Final.