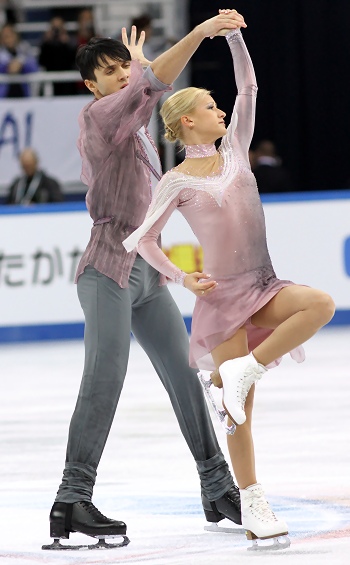 Tatiana Volosozhar and Maxim Trankov of Russia won their first Grand Prix title at the 2012-13 Grand Prix Final of Figure Skating in Sochi.

The 2012-13 ISU Grand Prix Final of Figure Skating concluded with the Pairs Free Skating event in which the front-runners, Tatiana Volosozhar and Maxim Trankov of Russia, won their first ever Grand Prix title. However, their victory left both fans and specialists torn between a desire to question the results and sympathy to the skaters’ plight.

Volosozhar, 26, and Trankov, 29, opened their performance to Violin Muse by Kawai Ikuko with a spectacular level four triple twist and a triple Salchow-double toe loop combination, but the skaters ran into trouble in the second half of the program.

Their first mistake was a relatively common one: Trankov fell after triple toe loop. The second mistake was rare and rather frightening. Setting up for a throw triple Salchow, Trankov almost threw Volosozhar in the air, but his foot slipped and he went down, taking his partner with him. Both skaters had to display quick thinking and a lot of agility to ensure that no one got stubbed by a blade and, fortunately, they succeeded.

“We are fine,” Volosozhar reassured the media afterwards. “Things can happen. We don’t understand (how it happened), but we will look into it to try to prevent it [from happening again].”

“When I fell very bad on the triple toe, I hit my hip but I didn’t feel anything then,” he explained, “but when we went for the throw (Salchow), I felt something in my leg… I started to feel pain in my right leg.”

The close call understandably affected the skaters, who were very cautious going into two lifts afterwards, and spoiled the impression from the final minute of their routine. It did not, however, prevent them from picking up the highest component scores of the night. They received 131.09 (63.21/69.88) points to finish second in the long and won the event with 204.55 in total.

“We cannot be completely happy, because we did not skate well,” said Trankov about their victory. “It was my fault. I made two very big mistakes… fell two times again.”

“When we did run-throughs of this program in our practices before the Grand Prix, I never fell on a triple toe (loop),” he said. “Now, it is already the second competition in a row that I fell on that jump. I cannot find the reason for it. I fell very bad on my hip and I hurt my leg, and afterwards, it did not work well. Then I fell again (on the throw). It is good that we are safe, that Tania did not fall.”

For the pre-Olympic season, the 2012 World silver medalists focused on maximizing the difficulty of their routine, taking full advantage of the fact that difficult elements performed after a halfway mark has higher base value. So far, they have never done it clean, but they believe that the risk is worth it.

“It was our choice to do this very hard long program,” stated Trankov. “The second half is very difficult for us. It is the first season that we have six (difficult) elements in the second half of the program. It is a big change, but we have to know what we are capable of before the Olympic season. Then we will sit down and think if it is reasonable or not. Anyway, we have always been the most consistent during the important competitions like the World championships.”

Bazarova, 19, and Larionov, 26, were nearly flawless in their interpretation of Khachaturian’s Spartacus. The team’s side-by-side jumps are still by far the weakest aspect of their skating, but their other elements were superb. The students of Ludmila Kalinina collaborated with a former soloist of Bolshoi, Ludmila Vlasova, who accompanied them to Sochi.

“She has been instrumental in our progress in presentation,” said Bazarova. “In the past, we could handle the emotional aspect of the performance, but only as long as as we were skating a draft of our routines. Once we started to add elements, things started to fall apart. She has been really pushing us, making certain that we continue to express our emotions, even if we arrive to a practice session in bad mood.”

“Today we were relaxed and comfortable during our performance,” said Bazarova, “and we were strong technically. At all other events this season, we have made mistakes. Now we have finally skated clean. We are overwhelmed. For us, the second place in the Grand Prix Final is an astonishing result. We’re happy!”

“I had a very difficult start of the season,” she elaborated. “I was injured and we had some doubts whether or not we would be ready in time for the Grand Prix events. I was so nervous. However, in Sochi I was already much calmer. After all, even making it to the Final was a major achievement for us. We are much more comfortable now. We are in great shape.”

The team will now train for the National Championships, the event they won last year.

“Most likely we will train in Novogorsk,” said Bazarova, “and then we will come back to Sochi. It is so familiar now, almost like coming home. The ice here was a lucky one for us. Let’s hope that the trend will continue.”

“It was quite okay, but we didn’t do all of our elements well,” admitted Tong. “Last year we didn’t compete much, and many fans were hoping to see more and better performances from us. We had some health issues. We were sick and after that, the quality of our practice wasn’t so good. Today it felt really hard to skate.”

“We were a little slow today,” added Pang. “We felt tired and we need some rest. We were lacking energy. Considering the circumstances, we are pretty happy with how we performed today. Our next event will be the Four Continents Championships.”

The team hopes that their health will soon allow them to practice more.

“Our old injuries keep bothering us,” said Tong. “Because of them, we can’t train the jumps really well, but we are now working with a doctor and hopefully we can improve our condition and will perform better in our next competitions.”

Meagan Duhamel and Eric Radford of Canada nailed their trademark side-by-side triple Lutzes, and managed to execute most of their other elements well until Radford suddenly failed to lift his partner in the air during their final lift.

“There was a timing issue in the program,” he explained. “The timing needs to be very accurate… I just pushed too soon with my arms without using my legs, and at that point, your body’s not going to work.”

“We had troubles with this lift, so when we’re back home we’ll reassess it, maybe put it earlier when we are not so tired,” added Duhamel. “Timing is always hard when you’re tired, that’s normal. Maybe we can reassess where this lift goes in the program and put a throw in a little later. It was our best performance until that point.”

The mistake most likely cost them between 4.5 and 5 points in the technical score, which might have made a big difference in terms of the final placement. As it is, the Canadian champions finished fourth with 187.09 points.

“We need to lose… to make mistakes in order to learn how not to make them,” said Duhamel, who celebrated her 27th birthday. “We missed a toe loop when we were in France two weeks ago. We went home and we really focused on it for two weeks and it was perfect today, so next time our lift will be perfect.”

“It happens every year,” she said about competing on her birthday. “I skate on my birthday. It’s normal for me. I know we’re disappointed because of the lift, but overall, it’s still a very strong program and we just need to keep our focus right till the end.”

Teammates Kirsten Moore-Towers and Dylan Moscovitch made mistakes on their side-by-side triple Salchows and both throws to finish sixth in the free program and fifth overall (180.45).

“It is great (to be back in the Grand Prix Final),” said Moore-Towers. “It was one of our goals for the season. I certainly felt a little bit shaky today. We are definitely looking to clean up for Nationals. I think our performance as a whole was the strongest one. Our coach has told us that. It is was a story rather than just element after element.”

“I think we are heading in the right direction,” agreed her partner. “Our Grand Prixs were not ideal, and still getting a place here definitely means that we are heading in the right direction. Just being here and seeing all these Olympic venues out of a bus window really motivates us to work harder to get back here again (next year for the Olympics).”

“Emotions are at low,” said Smirnov. “I was very upset about yesterday’s rough performance. Today was much better, but still not everything worked well. When we put more effort into emotions, we start missing on the elements. Today, we tried to concentrate more on the elements. We only missed the triple-triple (toe) sequence.

“Our program is quite new,” he added. “We didn’t skate it many times, but we’ll practice more before the next important event.”