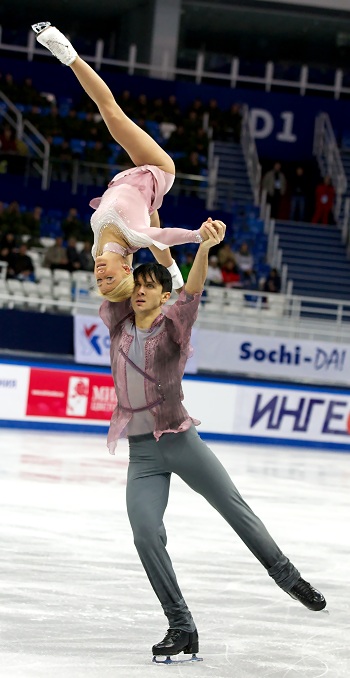 If such things were at all possible, the Pairs Final at the 2013 Russian National Figure Skating Championships should have been considered a petition to the International Skating Union to re-evaluate their concept of country quotas for major championships. Even without Vera Bazarova and Yuri Larionov, the performances by the five leading teams would have been a credit to at least a European or World championships.

Tatiana Volosozhar and Maxim Trankov won their second title in as many attempts with over 20 points to spare. Yuko Kavaguti and Alexander Smirnov took the silver, while Ksenia Stolbova and Fedor Klimov won the bronze.

Volosozhar and Trankov have set a serious challenge for themselves this season. After missing the gold at the 2012 Worlds by a fraction of a point, they want to ensure that it will not happen again. Their new long program features many difficult elements after the halfway mark which allowed them to get a 10 percent bonus for highlights distribution. The task has proven to be too difficult, though, resulting in two spectacular meltdowns at their two most recent events.

A few weeks ago at the ISU Grand Prix Final, they told the press that they are sticking to the game plan and that the pre-Olympic season is exactly the right time for these kind of experiments. It seemed that on the eve of the national championships, for which they have been the heavy favorites, the team had done some much needed number-crunching.

The 2012 World silver medalists arrived in Sochi with a new (or old, depending on the point of view) layout of their elements. The students of Nina Mozer still have five difficult elements in the second half, however, both jumping passes (side-by-side triple Salchows and triple toe loop-double toe loop combinations) are now performed in the beginning of the program.

“We had made a mistake,” admitted Trankov at the press conference. “We were too focused on basic value of the program, aiming to ensure that we got every 0.01 possible there. What we should have done instead was to skate clean and beautiful programs and to win in a different manner. Well, at least we have realized it in time.”

“We have examined the scores and realized that compared to our performance in Nice, we only got 0.40 points more for our jumps at this year’s Skate America where we have landed both of them,” he explained. “We have decided that it was not worth the risk. There is always a chance that you step out of a jump in the second half or that something would go wrong. So we have decided to return to the layout we had in our Black Swan long program.”

The result was a powerful and dramatic performance which was only marred by Volosozhar two-footing the landing of the final throw triple Salchow. After a scary crash on that element at the Grand Prix Final, Trankov was very delicate in tossing his partner in the air and it looked as if she did not have either enough confidence or enough momentum to land it clean.

“We are satisfied with the performance,” said Volosozhar. “We had some minor issues, all of them my fault, but I am very happy with how Maxim skated today.”

“At last!” chimed in Trankov.

“In some places where we could have made mistakes, we did make them,” admitted Trankov, “but it is only natural, part of a learning curve. Some elements required more efforts than usual. This year, we always skate last. It is more difficult both mentally and physically. We are getting used to it, though.”

“Today we have skated a new version of the long program and we have only done one run-through of it in practices,” he added. “We have not yet developed a proper feeling of it and do not know how to distribute our efforts throughout the routine, but we are satisfied with how we skated today.”

The 2012 European Champions will now focus on preparations for the continental championships in Zagreb at the end of January.

“We will do more run-throughs,” said Trankov about their plans. “At the moment, we occasionally still have to think it through. It is not automatic yet. We have re-arranged the elements and now the program feels very different, almost like a brand new one.”

“The only technical issue we will specifically focus on is a back outside death spiral in the short program,” he added. “We got feedback from technical specialists on what they are looking for and what we specifically have to improve, so we will work on it.”

“And on choreography,” added Volosozhar. “We had less than a couple of weeks between the Final and nationals, so we had no time to work on choreography of the new version of the program.”

Kavaguti and Smirnov also did well, landing a sequence of two triple toe loops and double Axels, but the team once again failed to perform a clean triple twist and only earned a level two for their death spiral. They delivered an inspired performance of their lyrical February routine and picked up 137.18 (65.41/71.77) for the free and 207.37 in total.

“We are quite happy with the way we skated today,” said Smirnov. “Yuko skated wonderfully. I am happy, our coach is happy, Yuko is happy, our fans are happy. That’s it.”

“Out program is a story of two people who want to be together, but circumstances always pull them apart,” he explained about their routine. “It happens over and over again, but their story has a happy ending. It might not always look like it, but believe me, when we skate like we did today, both me and Yuko are very happy.”

The 2010 European Champions have been previously quoted saying that they had some troubles uniting the technical aspects of their performance with expression.

“Today I was more focused on the technical side,” said Smirnov. “I was mostly thinking about elements, but halfway through the program, I noticed that Yuko was much more emotional, so I tried to catch up with her. Now I have to review the recording to see if I managed to do it or not. Personally, I was focused on elements, but Yuko delivered a complete package.”

“We have no plans to simplify the program,” he said about their plans for preparations for Europeans, “but the new judging system is all about math. Sometimes you have to do easier things in order to gain more points. We will see, but I think both me and Yuko will insist on taking risks. In the end, it is up to our coach to decide and we will follow her decision.”

For Stolbova and Klimov, the lone mistake was a fall on a triple flip by Stolbova towards the end of the program.

“There are not questions as to why,” said Stolbova. “I was so tired!”

Otherwise, their routine to the The Addams’ Family soundtrack was a perfectly entertaining break between two more somber performances by the two leading teams. They nailed both jumping passes and delivered all their in-character transition moves with a lot of gusto. The 2012 European bronze medalists picked up 127.68 (59.66/69.02) for the free and won the bronze with 195.46 points overall.

“We are ok with our performance,” said Klimov afterwards. “It’s a pity that we were not able to deliver a completely clean run-through. We were ready to do it, but it was ok.”

However, immediately after the performance, the skaters were visibly upset.

“Yes, we were very upset about the fall,” said Klimov. “We really wanted to skate clean.”

“And we had no falls all season long,” added Stolbova. “We had such a good performance and to make such a mistake so close to the end of the routine, it spoiled the impression, as least for us,” he summed up.

Julia Antipova and Nodari Maisuradze presented an entertaining jazzy routine in which their only mistake was a fall by Antipova on a triple Salchow in the second half of the program. The students of Natalia Pavlova otherwise nailed a sequence of two triple toe loops, two triple throws, and a sky high triple twist.

Even though the team has been skating together for less than a year, they are already up to the challenge of handling complex choreography, which is a bit of a trademark of Natalia Pavlova’s students. They even managed to create some original positions for their spins and lifts, and the smart musical arrangement of their routine guaranteed them full support of the crowd throughout the final minute. They scored 121.84 for the free, and with 178.80 points overall, finished fourth.

Evgenia Tarasova and Vladimir Morozov, another new team in the field, nailed their triple toe loop-double Axel sequence and their triple Salchows, however, both of their throws were flawed. They earned 111.36 (56.56/54.80) points and finished fifth (164.29).

Anastasia Martiusheva and Alexei Rogonov finished sixth (161.88) after Martiusheva popped a triple Salchow into a double and the skaters failed to execute the final lift. They received no credit for the lift as Rogonov was unable to lift his partner in the air on his first attempt. Otherwise, their routine to The Mission was among the most elaborate and intricate of the night, and they handled the choreographic challenge magnificently.

Vasilisa Davankova and Andrei Deputat slipped to seventh place with an error-ridden performance (161.76).

“Vasilisa was very tired already after the Grand Prix Final,” said Deputat afterward. “She is beyond exhausted right now and besides she feels a bit under the weather.”

The top two teams, as well as Bazarova and Larionov, will represent Russian at the 2013 European Figure Skating Championships.