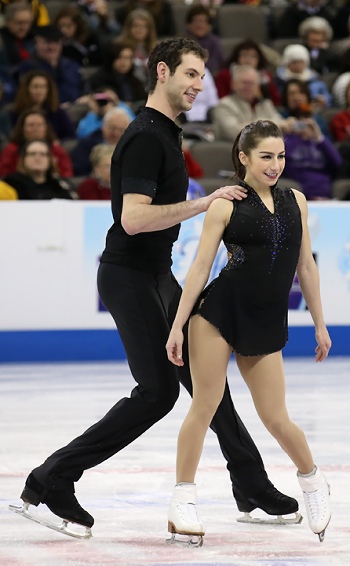 Marissa Castelli and Simon Shnapir perform their Short Program at the 2013 US National Figure Skating Championships.

It was the first big test for Marissa Castelli and Simon Shnapir, the unlikely pre-event favorites to capture the 2013 U.S. National Figure Skating Championships pairs title in Omaha. In a depleted field, the Boston-trained duo stepped up to the task, and take a nine-point lead into tomorrow’s free skate.

“We felt really good today,” Castelli said. “We had some little trips here and there, but we did our job today and are happy with how we skated.”

Skating to a medley of Stray Cat Strut and The Pink Panther, Castelli, 22, and Shnapir 25 performed with confidence and flair. The duo nailed the big three elements in their program—a level two triple twist lift, side-by-side triple Salchows, and a throw triple Salchow.

“We’re happy with the way we skated given the circumstances going on around us,” Shnapir admitted. “We can’t control that—We can control what we do at home in practice, and what we put out there in our programs. That’s all we really focus on—our daily preparation of what we do at home with our coach, and now really focus on what is going on around us because we can’t control that.”

The leaders earned level four on their step sequence and lift, and we were awarded with 62.27 points in the competition.

Sitting in second place is the new team of Felicia Zhang and Nathan Bartholomay, who only started skating together in May 2011. The duo, who trains in Florida with Jim Peterson, Lyndon Johnson, and Olympian Amanda Evora, earned 53.19 points.

“Our short program went really well today,” Bartholomay said. “We’ve been working on kind of a calm aggressiveness throughout the program, and I think that we really drove that home today. A little mistake here and there, but I thought that we were strong and put the nerves aside and just got down and had a good time.”

Zhang, 19, and Bartholomay, 23, skated a technically demanding program to music from the film Cocoon, that included a level two triple twist lift and a throw triple Lutz. Although the duo received just a level one for their death spiral, the only glaring error was when Zhang put her hand down to save the landing on her triple toe loop.

“In the moment, I just brushed it off and just moved to the next element,” Zhang explained. “I think that it was just a silly hand down, and just a mental note to keep in mind for the long program.”

Another first year team, Alexa Scimeca, 21, and Christopher Knierim, 25, were just a hair behind in third with 52.79 points.

“We’re pretty happy with our skate today—we made two pretty big errors, but it’s all about experience and we’re still so new,” Scimeca explained. “We’re really just enjoying ourselves here.”

In their romantic Moonlight Sonata program, the duo made two major errors—first a step out on the throw triple flip, and on the next element, Scimeca fell on an under rotated triple Salchow. However, Scimeca and Knierim did land a huge level two triple twist lift and performed with stronger skating skills than their nine-month partnership would suggest.

“We’ve been pretty fortunate to get some international competitions in our first year, so we’re pretty excited about that,” Knierim said. “We just want to take those experiences that we got and bring it here and have good performances.”

Lindsay Davis, 20, and Olympian Mark Ladwig, 31, finished in fifth place with a willowy performance to music performed by The Piano Guys. The duo trains with Zhang and Bartholomay in Florida, and take 51.65 points into the free skate.

“This is the culmination of some really good training at home the last three months,” Ladwig said. “A good time was had by all.”