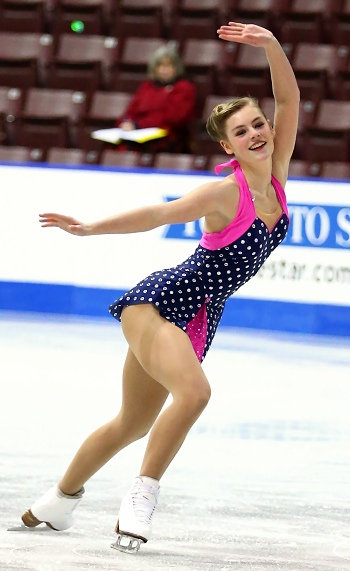 The junior ladies short program on Monday night at the 2013 Canadian Tire National Figure Skating Championships was surprisingly close. In a discipline that is generally viewed as Canada’s weakness, the future looks to be not only bright, but full of big personalities and strong performers.

The competition was close, but at the end of the night, the final skater leapt into the lead. Larkyn Austman of BC delivered a peppy swing program that included a strong double Axel and a triple toe-double toe combination.

“There were a couple mistakes in the warm up,” Austman said, “but I fixed them in the program.”

After the jumps were done, she really brought it home with level 4 straight line steps.

“I think a lot during the footwork, but it’s fun because I’m done then,” said the 14-year-old.

“I want to stay on my feet and rotate everything,” she said.

Double-discipline skater Natasha Purich is one-for-four for the week now, after one of her best short programs set to an orchestral arrangement of Elton John’s Your Song. She landed a double Axel and triple toe-double toe, but received an edge call on a double flip.

Purich (AB/NT/NU) was the very first skater of the night and had a long wait, but her score of 44.27 (23.84/20.43) points continued to hold up as skater after skater topped the 40-point mark (usually considered the benchmark for a strong score in Canadian junior ladies).

The 17-year-old will also compete this week in the junior pairs discipline with partner Sébastien Arcieri.

Justine Gosselin of Québec may have fallen on her opening triple Salchow (meant to be her combination), but she rallied quickly and smiled through the rest of her short program. Deep edges on her straight line steps earned her high marks for that element, and her spins were especially quick. She placed third with 44.14 (23.54/20.60) points.

The 19-year-old had not qualified for the Canadian Championships since 2009, so sitting in third at this level is a huge step for her.

Camille Ruest, also from Québec, has made a big leap as well. The 19-year-old did not qualify for Canadians last year, but rests in a close fourth place (43.45) after her gypsy-themed short program. Her performance quality was excellent, and it was clear that she really gets her music.

New Brunswick’s Kassie Costello is fifth (43.38), but the look on her face after she landed her triple flip fairly cleanly looked pretty victorious. Unfortunately, a downgraded double Axel kept her from finishing even higher. The 15-year-old is less than a point from second place.

Marika Steward, 15, is from Northern Ontario, but trains in Sendai, Japan, where her father runs a school. She has made big improvements over the last year and had one of the most technically ambitious programs, going for two triples, including a flip.

Steward’s Japanese heritage (on her mother’s side) was reflected in her lyrical short program to Summer by Joe Hisaishi. Although she fell on her double Axel, her program was one of the most pleasant of the night, and she finished with 43.07 points.

Madelyn Dunley, the 2012 novice champion, delivered a clean short program with a triple Salchow combination, but two level 2 spins kept her from reaching the free skate’s final flight. The 15-year-old is not discouraged, however, since there are only a couple of points separating her from a medal (42.52).

“It definitely boosts my confidence knowing that everybody’s so close,” commented the skater from Central Ontario. “I know I am in range of achieving my goal, which was to be top three. If I do what I can do, then I can achieve them.”