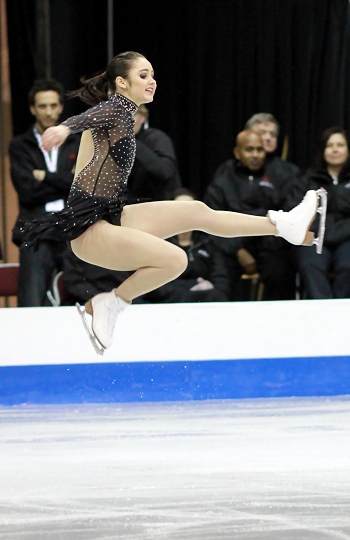 “This is actually one of my easiest triple-triples,” Osmond explained. “I can do flip-toe and Lutz-toe also. It’s just that I have more confidence in this one. I’ve always done this one.”

Although Osmond does not anticipate changing her planned technical content for the free skate, she is already thinking about the future and what changes she may need to make in order to keep up.

“A lot of the younger skaters are coming up with a lot more difficult elements,” observed the 17-year-old. “Last year, I was one of the only people who attempted the triple-triple. We’re really competitive with each other. When one person does something, you want to learn it.”

“I came here with it in my head to do two good programs and enjoy it,” Lacoste said. “It was such a silly mistake. I don’t think I ever fell on a triple loop in practice at home. I was very shocked.”

After the mistake, the 24-year-old managed to keep a level head and focus on maximizing the rest of her points. She finished with a level 4 combination spin, level 4 footwork, and a level 3 layback, which was what she had planned. Those points helped to keep her nearly four points ahead of the rest of the field (57.86 (30.75/28.11)).

Séguin, one of the exciting first-year seniors in the field, skated into third place with a score of 53.93 (30.68/23.25) points. Her routine to Fever and Sing, Sing, Sing featured a triple Lutz-double toe loop combination and a triple loop. She also earned level 4 on her footwork and two of her spins.

The development of Canadian ladies has been prevalent at the novice and junior ranks for a few years, and as the same group of skaters moves from level to level, the technical content seems to continue increasing.

“We’re only pushing each other,” said the 16-year-old said. “It’s better and better every time.”

Skating in the first flight, Adriana DeSanctis (CO) needed a clean skate if she wanted her score to hold up through the rest of the event, and she delivered a strong one. Her triple Lutz-double toe loop combination did not have the amplitude of some of the other top skaters, but the difficult triple helped balance out her solo jump, a triple Salchow, which had a lower base value.

Gabrielle Daleman (CO), last year’s Canadian junior champion, settled into fifth place with a score of 51.80 (30.76/22.04) points. She opened with a triple toe loop-triple toe loop combination, but then fell on her triple flip. Even with the fall, she still managed the second-highest technical elements score of the competition, which is something that the determined teenager recognizes as a strength.

“You gotta do hard tricks,” said the teen who turned 15 last week. “You need to take risks.”

Alaine Chartrand (EO), who competed on the Junior Grand Prix for Canada this season along with Séguin and Daleman, is in sixth with 50.76 points. She landed and received credit for a triple Lutz-triple toe loop combination, but fell on her solo triple flip.