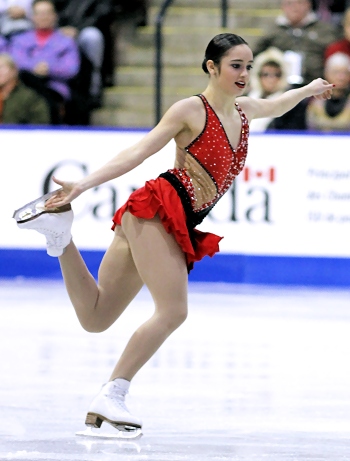 It has taken quite a few years, but the competition in the Ladies discipline in Canada is finally back in a big way. The ladies free skate at the 2013 Canadian Tire National Figure Skating Championships featured three fresh faces on the podium, a sign of things to come.

Osmond was expected to win these championships, and the expectations were even higher after her excellent short program on Friday.

She started her free skate strong, but faltered late in the program, with a fall on her double Axel. Her Carmen free skate was the most difficult program of the night, a fact reflected in her program component marks, which were mostly in the 8s.

Beyond the jumps, Osmond electrified the crowd with her passionate performance. She has grown into her Carmen character as she has matured over this breakthrough season.

“I think I’m still the same,” said the 17-year-old. “Maybe I’m a little more confident that I was last year, never landing a triple-triple in competition before. This year I’ve come into the competition with the exact same elements that I had last year, so I’m really confident in this program. I think that’s the only difference.”

Osmond has opportunities to improve upon in this performance at the Four Continents and World Championships. Although the World team has not yet been named, it is difficult to imagine that she would not get the nod.

With a virtually clean skate for, Daleman leapt into second place (163.90). She was ecstatic to take home a silver medal from the Canadian Championships.

“When I came into this competition, I said, ‘This bronze is mine. I want it and I’m gonna go for it,'” said the 15-year-old. “My goal was top three and national team, and getting the silver was just a bonus. It made me feel so happy for my first year in senior.”

After opening with a triple toe loop-triple toe loop combination, Daleman had the crowd in the palm of her hands. She is a spunky performer, but was able to slow down for this free skate and present a different style from her edgier short program.

Quite a bit of drama was reserved for the bronze medal competition. After Amélie Lacoste (QC) received her marks, she was in second place, and thought that she would be on the podium. When the medals were announced, it was Alaine Chartrand (EO) who came out to collect the bronze medal. It was not until about 10 minutes after the medal ceremony that the confusion was cleared up.

Chartrand’s first element, a triple Lutz-half loop-triple Salchow was called correctly by the technical panel, but was mis-entered by the data input operator as a sequence, resulting in a 20 percent reduction of the base value. Chartrand and her coaches caught the mistake, but the problem could not be fixed while the event was still in progress.

The panel only had a few minutes between the end of the event and the medal ceremony to verify the correction, and the difference in points resulted in a flip of the standings.

“My triple Lutz-half loop-triple Salchow was supposed to be a combination, and then we saw that it was counted as a sequence, which is less points,” Chartrand explained.

Chartrand has worked hard over the past few years to improve her presentation and skate more consistently, which has helped her fit in quite well with the current crop of senior skaters.

“I knew it was a possibility, but I still can’t believe that it’s there,” said the 16-year-old, looking down at the bronze medal hanging around her neck.

Chartrand, Daleman, fifth-place finisher Véronik Mallet (QC), and sixth-place finisher Julianne Séguin (QC) have all competed against each other coming up through the levels. Close followers of Canadian skating knew that a big change was in the works for the ladies discipline, but the average fan was in for an exciting treat this year as the talent has finally trickled up to the senior ranks.

“We went to [training camp] and you see one person do a triple Lutz, and you try to do a better one at the other end and get better and better,” Daleman said. “It helps when we’re friends off the ice and competitors on the ice.”