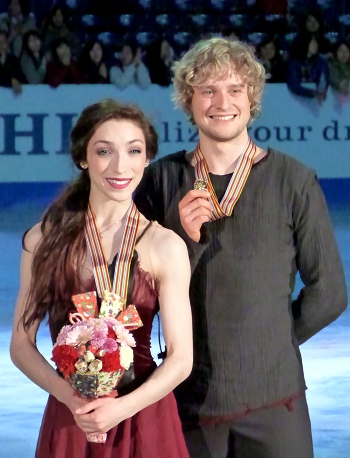 Davis and White skated first in the last group and right before Virtue and Moir. They turned in a passionate performance of their dance to Notre Dame de Paris, executing all elements with confidence and skating with great flow. At the end, they remained a little longer than usual in their closing pose and then hugged tightly.

The reigning World silver medalists earned a level four for all elements except the circular footwork (level three) to pick up a new season’s best of 112.68 (54.94/57.74) points. At 187.36 overall, they overtook Virtue and Moir to win the title.

“It was a really emotional skate,” said White. “We gave it everything we had, literally, and that’s all we can ask of ourselves. It’s difficult coming off nationals, so to be able to go out and perform the way we did is a monument to our preparation and I’m really proud.”

“We have always been known for out athleticism, but this year I think we have brought our artistic level up to match that,” she added. “Being able to watch the whole program and enjoy it start to finish for every little thing we do is the best part about it. When we watch it, that’s what we’re aiming to see.”

It felt like a strange déjà-vu what happened next. At first, everything went smoothly for Virtue and Moir. They attacked their powerful Carmen routine and drew the crowd into it when they suddenly stopped about 2.45 into it, just before their straight line-rotational lift. The team skated around in a circle, Moir talking to his partner, Virtue looking pale and anxious. Moir then informed the referee that his partner had an injury while she stood at the boards, but then they decided to continue.

“I just had some cramp in my legs to deal with,” Virtue later explained. “I’m glad we collected ourselves and kept pushing through the program. I can’t wait to get home and deal with this problem.”

“When it stops, the moment is going by really fast so I can’t really recall exactly (what I thought), but we just need to make a couple of alterations to the program, tweak a couple of things, get out there and finish,” added Moir when asked about what went through their mind.

At the ISU Four Continents Championships in 2011, there was a similar incident when Virtue and Moir stopped in their free dance, but at that time they withdrew from the competition.

The Canadians resumed their program at the point of interruption, which was before the lift, executed the lift and other elements beautifully as if nothing had happened. The lifts, the spin, and the twizzles garnered a level four and the two step sequences were a level three. Virtue and Moir set a new season’s best with 109.20 (52.73/56.47) points, but dropped one spot to second at 184.32 points overall.

“I think we’ll be back on track in no time and excited to train really hard for Worlds,” said Virtue.

“Tessa and I feel like as a team we take a lot of positive things from this week, especially in our short dance,” said Moir. “In the free dance, we were able to execute a lot of the elements that we’ve been struggling with in practice and a little bit at the National Championships. Obviously, there are a couple of things we want to work on going into the World Championships. We know what we have to do, luckily.”

Chock and Bates danced to the bronze with a fluid performance to Doctor Zhivago, completing beautiful lifts, but they left a few points on the table when they got a level three for the twizzles and a level two for the diagonal footwork. As a result, they were ranked fifth in the free dance with a seasons best score of 94.98 points, but remained on the podium at 160.42 points.

The Americans, who have been skating together for only 18 months, took their first ISU Championships medal as a team.

“I don’t think there is a real secret to our success,” said Bates. “I think we’ve just been working very hard and we had great coaching and things have been coming together for us. We’re hoping we can kind of build on this momentum and carry it into the World Championships and then into the Olympic season as well.”

Teammates Maia Shibutani and Alex Shibutani were not able to surpass their national rivals and finished fourth with 159.97 points. Their Japanese-themed Memoirs of a Geisha free dance was well-received and well skated. The siblings had a level four for five elements, but the circular step sequence was rated a level two.

“We are very pleased with our performance today. We feel like it was our strongest free dance of the year. We got a personal best and the crowd was so amazing,” Maia Shibutani said.

Her brother agreed: “We built our program on what the crowd gave us. We felt the energy and excitement when we first walked into the building. I think we carried ourselves with a lot of poise and maturity, particularly tonight skating at the end of the event.”

“We are very happy with our progress, not only throughout the season, but this week,” he added.

“As always, we will go home and work with our coaches on our programs,” Maia Shibutani commented. “Worlds is the last competition of the year for us, and we are looking forward to improving and showing our programs at their very best.”

Piper Gilles and Paul Poirier of Canada turned in a technically strong performance, earning the same levels as Davis and White. They placed third in the free dance, but remained in fifth overall at 157.83 points.

“Piper and I were very pleased with our free performance today,” said Poirier. “This was a lot of stronger than the one we performed at the nationals two weeks ago. So we are really glad the way we started here, and how we work out by peaking at the right moment. It was such a pleasure performing in Japan, crowds are so great. I know this is the first time for Piper, and I know she is enjoying her time here. We are so grateful to get all the support from the crowd.”

Nicole Orford and Thomas Williams of Canada moved up from seventh to sixth with a lively dance to High Society and Now You Have Jazz (139.10 points).

“This (4 Continents) is a great experience,” said Orford. “We weren’t expecting to be here, so it was a big honor for us to compete here. We had a lot of fun. We definitely have Olympic goals, and we would love to compete at the World Champions.”

Japan’s Cathy and Chris Reed started well into their Beatles program, but Cathy fell in the diagonal step sequence and after that the siblings appeared cautious. They slipped from sixth to seventh with 131.04 points.

“I felt pretty solid in that footwork and that twizzle was pretty straight, but my blade somehow slipped and I really have no idea what happened exactly,” Cathy Reed told the press.

“It is so tough (to recover from a fall like this),” she continued. “When it happens it is a kind of shock, but you just have to get up as fast as you can and keep going. Any mistake you make you learn from it. It will never happen again.”

“Everyone’s support here has been genuine to us, and without this support, I don’t think we’d get to where we are now,” her brother Chris said.

To skate to the Beatles is special for him.

“I always loved listening to the Beatles before, they are one of my favorite bands,” he said. “To be able to skate a program to the Beatles is just phenomenal. It was hard to get all the choreography done. It was a whole new field dancing in the 60s era. We got our choreographer to help us out and teach us all these different dancing moves. It was so much fun.”