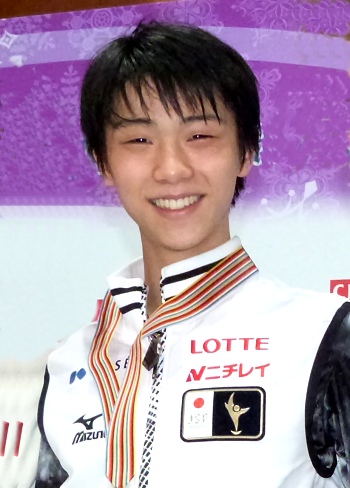 Yuzuru Hanyu of Japan captured the Men’s short program at the 2013 ISU Four Continents Figure Skating Championships in Osaka, Japan, Friday. However, spectators were in for a few surprises in the event when World Junior Champion Han Yan of China finished second ahead of late replacement Richard Dornbush (USA). World silver medalist Daisuke Takahashi of Japan currently sits in fourth.

Hanyu had drawn to skate last out of the 23 competitors, right after Takahashi. The 18-year-old nailed an excellent quad toe and triple Axel in his program to Parisian Walkways picking up 24.06 points alone for these two elements (for comparison, the two last ranked skaters had a total element score of 19.32 and 17.68 respectively). The spins rated a level four and the footwork a level three. However, the Japanese Champion singled the Lutz, but at least added a triple toe for a combination.

“I do not feel good about my performance,” Hanyu confessed. “I think I missed the Lutz because my timing was a bit fast. I did not feel the pressure from being the national champion. I did not focus on winning or losing to Daisuke (Takahashi) or Takahito (Mura), and I was focusing on my own performance.”

“I was doing very well condition-wise today, so I am going into to tomorrow feeling reassured that I am still in first place,” the World bronze medalist added. “At the same time, there are a lot of regrets, so I am in a very good place to work harder for the free program.”

“In the warm up I popped and fell on my first Lutz,” Hanyu explained, “but I had a good mind set in changing my thinking. Even at the six minute warm up at Nationals I didn’t have a very good practice, but I was able to remain calm going into my performance. Having said that, the image was still there I guess. Maybe that is the reason why I missed my Lutz, so I may need to change my mind set a little bit when I am doing my six minute warm up.”

Yan had a tough start to the season, battling a shoulder injury and not making it to the Junior Grand Prix Final, but now he seems back on track. Performing to Tango Jalousie,  Adios Noninos, and Libertango, the 2012 World Junior Champion pulled off a beautiful triple Axel, a quadruple toeloop, a triple Lutz-triple toeloop, and two level-four spins.

“I am very pleased with what I did,” commented the 16-year-old. “I did all my elements. I don’t have a special goal for this event, this being my first (international) senior competition. I don’t expect a medal or anything. I am here to learn. Today’s result won’t put pressure on me. I just want to show what I can do in practice in the free skating and want to do all my elements.”

“For a long time I could not practice well, but it has been going better for the past few weeks,” Yan added.

Last week, Dornbush didn’t even know that he was going to compete in Osaka and now he found himself in third place after a strong short program. The American completed a quadruple toeloop, triple Lutz-triple toe, and three level-four spins in his routine to With Or Without You by U2. The only glitch came when he touched down with his hand on the triple Axel. With 83.01 (45.48/37.53) points, he improved his personal best by nearly 13 points.

“I feel really good about the short program, mostly because I wasn’t expecting to be here,” said the 21-year-old. “To come out and skate a program that was better than at Nationals was so fulfilling, especially since I just got the call Sunday. I am happy to be here.”

“I was already well conditioned from Nationals,” added the 2011 U.S. national silver medalist. “I wouldn’t say that I’m 100 percent, but I put all that I have out there and I’m definitely happy with what I did.”

“(Coach) Tammy (Gambill) always takes being alternate very seriously,” he offered. “I was on the ice every day. It’s hard to train as the alternate, because, in my case, you’re disappointed that you hadn’t gotten any assignments, so it’s hard to have that self-motivation. I stayed fit enough and as soon as I got the call, there was a fire lit underneath me. I rose to the occasion.”

Takahashi, who lives and trains in Osaka, was not able to give his home crowd what they were hoping for. The World silver medalist had a rough debut of his brand new short program to Moonlight Sonata when he stumbled on the quad toe and fell on the triple Axel. The Japanese star recovered to land a triple Lutz-triple toe and two spins. His straight line step sequence garnered a level four, but the change camel spin was a level two.

“I didn’t perform well at all for today’s short program not only the jumps, but also performance-wise and skating-wise,” said the 26-year-old. “I couldn’t get a good balance on my nervousness.”

“I really like my new short program, and it does fit my feeling very well,” said the five-time national champion. “As I know I can do much better than today and I began skating with my new program after the New Year, I just need to practice more with this new music to improve my short program. I know I cannot make mistakes in the free skating, but I have nothing to lose and I am going to try my best tomorrow.”

China’s Nan Song, on the other hand, did his very best in his routine to The Middle East Side that also proved how much he has progressed in his presentation. The Chinese Champion hit the only clean quad-triple toe combination of the day followed by a triple Axel, a level-four change sit spin, and a triple Lutz. He showed a lot of emotion at the end of his program and hit the ice with both hands in triumph.

The 22-year-old achieved a new personal best with 81.16 points and is ranked fifth.

“Definitely this was this season’s best performance,” said Song. “I showed everything I can do. The audience supported me right from the beginning and pushed me to give my best. It was very consistent today and I felt confident when I stepped on to the ice.”

“I felt just so relieved,” the athlete elaborated when asked about his emotional reaction. “I had a lot of problems earlier this season in other competitions, and I was just so relieved to come out and skate my best. This was so much better than last year. I was able to improve on many aspects.”

Canadian Kevin Reynolds was the only one man to go for two quads in the short program, but both the quad Salchow in combination and the quad toe were underrotated. The fun “Chambermaid Swing” program was well-received by the crowd, and he placed sixth at 78.34 points.

Denis Ten of Kazakhstan produced a triple Axel, triple Lutz, and three level-four elements in his exquisite short to The Artist, but he stepped out of the back end of his triple flip-triple toe combination. He still earned a new personal best with 78.05 points and is ranked seventh.

“I feel good because the season started rough on me,” said the 19-year-old. “I got an ankle injury and still feel pain, but my dream was to skate in Japan in this big competition. I didn’t think about the goals per se, as I recovered from injuries. There are some other obstacles like my coach (Frank Carroll) couldn’t come because of unexpected circumstances, but I hope he will be proud of me as he watches my performance on TV.”

Carroll had to cancel his trip as his sister had died.

Japan’s Takahito Mura stumbled on the quad-triple toe combination but rallied back to hit a triple Axel and somewhat shaky triple Lutz. He finished 8th (78.03 points).

“I feel bad about my mistake in the quad triple combination,” said the national bronze medalist. “I should have concentrated more carefully on putting my left leg back earlier. I think my skating did not work as I wanted, so I feel I could have done better in general. For the free program I am more confident because I did well with it in the Grand Prix.”

“The goal for this Four Continents Championships was to really prepare myself for the World Championships,” said Miner. “I was hoping to put out a great short program. I had a little issue with my quad Sal, but there is another opportunity tomorrow.”

“I wish I could have done a better quad,” added the 22-year-old. “I did a good one in the warm up and I rushed my timing in the program. Lesson learned. It’s another opportunity to get feedback and improve going into Worlds.”

“It was a little rough, definitely a learning experience,” said teammate Aaron. “I gave it all I got. The Axel got away from me, but that’s OK. I have the free still to go. I hit the wall on the other side of the rink. That shouldn’t distract me, but I kind of let it get to me. The quad-triple, I took off a little funny on the triple toe so I did a double.”

Canada’s Andrei Rogozine finished 11th at 70.58 points with a clean program that included a triple flip-triple toe, a triple Axel and triple loop.

The entertaining Misha Ge of Uzbekistan two-footed and underrotated his triple Axel, but the other elements in his Flamenco routine were strong (70.26 points).