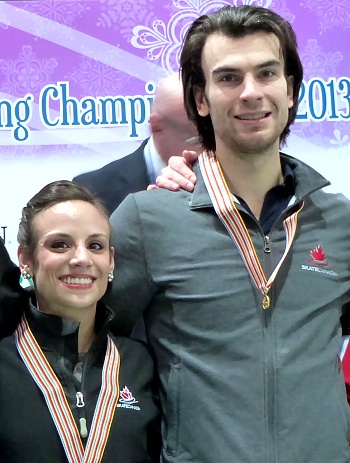 Meagan Duhamel and Eric Radford of Canada are poised for gold in the Pairs event at the 2013 ISU Four Continents Figure Skating Championships after a strong short program on Friday in Osaka, Japan. Teammates Kirsten Moore-Towers and Dylan Moscovitch came in second, followed by USA’s Marissa Castelli and Simon Shnapir.

Duhamel and Radford turned in what probably was the best short program of their career thus far. Their dancey La Boheme was highlighted by a triple twist, side by side triple Lutz, and throw triple Lutz. The 2011 Four Continents silver medalists collected a level four for the lift, death spiral, step sequence, and flying combination spin to improve their personal best significantly with 70.44 (40.33/30.11) points.

“To break that 70-point barrier, not too many teams have done that, it feels incredible,” said Radford. “I kind of can’t believe that this happened. I feel like it happened to somebody else. It’s really amazing.”

“We kind of discovered especially after last Nationals the more pressure that’s on, the better we seem to skate,” he offered. “Coming in here, we knew that we had a great chance to finally have a gold medal after all these silver medals. We came in with a fighting attitude as opposed to trying to ride the wave from Nationals.”

“We had a very disappointing Four Continents last year and we questioned whether we should go this year after Nationals is so close,” added Duhamel. “We’re still so disappointed with last year’s Four Continents that we feel a lot of fire to prove that we can skate well at this competition.”

In 2012, they were considered top contenders but finished fourth in this event.

Moore-Towers and Moscovitch were a strong second with their playful routine to Motley Crew. The Canadian silver medalists completed a triple twist, side by side triple toe (she put a hand down), a throw triple loop, and three level-four elements. For this, they got a season’s best of 66.33 (36.47/29.86) points.

“I feel good about the performance today, though there were small things that we didn’t do as good as we would have liked to,” said Moore-Towers. “So we are looking forward to cleaning that up for worlds. We are just going to go out and perform just like we have been training it. We had a great performance at nationals, so we are looking forward to building on that.”

“Like Kirsten said, we definitely left a few points on the table,” added Moscovitch. “We didn’t skate as cleanly as we could have had, but overall, we are happy about the program and we are looking forward to the free skating.”

Skating to Stray Cat Strut and Pink Panther, Castelli and Shnapir appeared a bit off today. Their triple twist didn’t have much height and Castelli fell on the throw triple Salchow. The U.S. Champions did land the side by side triple Salchow, but only earned a level four only for their lift. They scored 53.06 (28.06/26.00) points, well below their season’s best.

“We just came back from Nationals. It was not the best performance,” explained Castelli. “We did kind of well trying to get back into the program after my fall. Every skate is an experience for us, even though we did some mistakes.”

“The fans are great here,” added Shnapir. “We didn’t quite have the skate we were looking for, but we are hoping to push forward for worlds. It was not our best, but we will not let it get in our way.”

USA’s Felicia Zhang and Nathan Bartholomay are also newcomers to the event. The national bronze medalists produced a triple twist, but the triple toe was shaky and Zhang crashed on the throw triple Lutz. The Americans are ranked fourth at 52.98 points.

“We had an OK warm up,” said Bartholomay. “It’s our first time being in a big arena and that took me off guard a little bit, but we felt really strong and got into our knees. We put a good set of triple toes out and a really good triple twist. It was a successful run through.”

China’s Cheng Peng and Hao Zhang finished fifth with 52.46 points. Their triple twist in their routine to Live and Let Die was impressive (no surprise as they can do a quad), but Peng doubled the side by side toeloop and also stumbled on the throw triple loop.

“Today’s performance wasn’t so good. I made errors on two elements,” noted 15-year-old Peng, the youngest competitor in the event. “I had an ankle injury two weeks ago, and last week I fell on my hip, so I have been training through injuries. It is getting better now.”

Her partner is actually the oldest competitor at age 28.

“The audience in Japan is always very welcoming,” said Zhang. “I remember this from many competitions here. We are still a new team. We can do the difficult elements, but we still need to gel as a team. Our goal is to skate as well as we can and to show the Japanese audience a beautiful performance in the free skating.”

Teammates Wenting Wang and Yang Zhang also struggled with the solo jump, but the triple twist and throw triple flip were strong. They placed sixth at 51.26 points.

Paige Lawrence and Rudi Swiegers of Canada came in seventh and last after making errors on the triple twist and her falls on a downgraded triple toe and the throw triple Lutz (48.76 points).

“Today’s performance was one of our weaker skates in the season,” noted Swiegers. “We are both disappointed, but we will go back there and will perform strongly (on Sunday).”