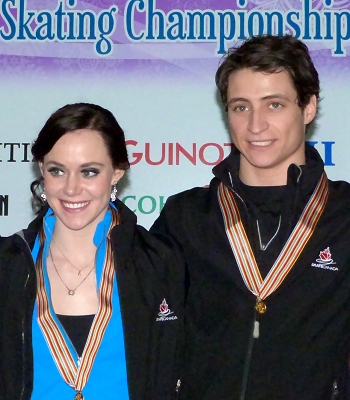 Tessa Virtue and Scott Moir of Canada edged out arch rivals Meryl Davis and Charlie White (USA) by a mere 0.44 points for the lead in the short dance as the 2013 ISU Four Continents Figure Skating Championships kicked off in Osaka, Japan, on Friday. USA’s Madison Chock and Evan Bates finished third. All three teams posted a new season’s best score.

Virtue and Moir skated before their toughest opponents in the second warm up group while all three American teams had drawn to skate in the third group. The Canadians really shone in their performance to The Waltz Goes On by Anthony Hopkins, executing their elements effortlessly and bringing across the light feel of the Waltz and the upbeat Polka perfectly.

The Olympic and World Champions earned a level four for the first Polka pattern, the twizzles, side by side footwork, and the lift, and were rewarded with a season’s best of 75.12 (37.50/37.62) points. They beat Davis and White by almost one point in the technical mark, but their component score was 0.20 points lower.

“Tessa and I had a great performance today,” said Moir. We are on our game. We did everything we envisioned how the program is going. It is a great accomplishment for us. Having that said, it is our job to get this out of our head and really focus on our job on Sunday.”

“This is one of our favorite programs to do and we’re excited to bring Carmen to Japan,” Moir said of the free dance. “This is a huge event for us. It is an ISU championship and we take this very seriously. For us, it is a great way to compete against Meryl and Charlie and the other strong North American teams and get the feedback. It still gives us enough time to go home and regroup before Worlds.”

“We knew we had to be here and compete, trying to build our programs for the World Championships,” he added.

The Olympic Games are already on their minds, as Virtue confirmed.

“It is exactly one year from today when the opening ceremonies (take place),” she acknowledged. “We talked about it a lot today, actually. It seems to be a common conversation for us these days, just looking ahead at probably our last year competing.”

“We’re right on track and this has been a great season for us to build,” she added. “We tried new things and really pushed ourselves with what we are doing element-wise. Next year is always different, because you have to be prepared and ready early in the season. Everything comes really quickly in an Olympic year.

“We have some experience to draw from, but I think we’re just trying to enjoy the process, every little bit of it,” Virtue summed up. “The nerves before competition, those tough training days, we’re really kind of trying to embrace that and just enjoy this whole dream.”

Davis and White put out a very strong performance to March, Polka and Waltz from the ballet Giselle. The Grand Prix Final Champions were the only team to achieve a level four for both Polka patterns. Their trademark fast twizzles were a level four (and had mostly +3 Grades of Execution (GOE) marks by the judges) as was the lift, but the side by side circular footwork was a level three which made the difference today. The U.S. Champions collected 74.68 (36.86/37.82) points.

“I think it was a really good performance today,” said Davis. “It was a step up in a lot of aspects. Technically, it wasn’t what we were aiming for. We had a couple of little mistakes here and there which certainly you can’t get away at this point. We’re looking to execute everything perfectly at this point of the season, but I think we’ve made some improvement in a lot of other areas. Despite the little mistakes we are headed into the right direction and we’re feeling good.”

“It happens from competition to competition,” added White. “Of course when you are competing against Scott and Tessa, you pretty much have to be perfect and that’s what’s expected of both of us. With one little mistake, we’re a little bit behind. It will make for an exciting free dance.”

Chock and Bates danced to a Waltz and Polka from Quidam from Cirque du Soleil and gave a smooth performance, completing a level four lift, Polka sequence and twizzles. The team scored 65.44 (33.79/31.65) points.

“We have been training to be consistent and have fun, and today we did, we had a lot of fun,” said Chock. “When we heard this music, we immediately liked it and that is always a good sign because we have to listen to it all year.”

“Madison and I are really happy with our performance today,” added Bates. “We have been striving for consistency. As a new team, we think it’s important to be consistent and show good skating each time out. Today was a good outing for us and we are hoping for another one Sunday.”

Like at U.S. Nationals, Maia Shibutani and Alex Shibutani finished behind Chock and Bates and are currently ranked fourth with 63.26 (32.07/31.19) points. The siblings were solid in their South American version of Polka, Waltz and March, but lost points when their second Polka sequence was graded only a level two. The first Polka section, the twizzles, and the rotational lift garnered a level four.

However, the U.S. bronze medalists were also behind Chock and Bates in the component scores. They had changed the order of elements in their short dance and now start with the Polka.

“We have been working really hard on this program since the Grand Prix series,” said Alex Shibutani. “We are happy with the progress we are making so far, but we are also looking for where the program will end up. In terms of changes of the order of Yankee Polka, we wanted more excitement from the beginning, and we are happy with the flow of the program.”

Canada’s Piper Gilles and Paul Poirier entertained the crowd with their fun performance to Mary Poppins. Apart from Gilles’ wobble in the side by side footwork, their performance was strong as well. They had a level four for three elements, but the side by side merited a level two only. The national silver medalists collected 60.20 points, a seasons best, to come in fifth.

“I am very excited to be here,” said Gilles. “This experience is new and fresh and I am happy to be skating with my new partner. I had a little wobble in the middle line, but we have grown stronger and stronger. We goof around together and I love our partnership.”

“I am so excited to be here in Japan,” added Poirier. “The fans were great and were very supportive. We want to put the miss behind us and focus on our free dance and perform really well. This year is a learning year for us, so we want to take it one step at a time and enjoy our experience.”

Cathy and Chris Reed of Japan, one of the three brother-and-sister teams in the Ice Dance event, are currently ranked sixth at 53.97 points. Their dances appeared smooth, however, were a little slow in places, and they earned a level two and three for the Polka patterns.

“In spite of our season’s best score, I feel that we had low technical points looking at the international level,” said Cathy Reed. “I am a little worried about it.”

“Though I have been nervous in the practice, I think I performed ok,” she added. “We have to discuss about the future training plans. We need a noticeable change for the World Championships. I want to perform better tomorrow.”

Canadians Nicole Orford and Thomas Williams left a couple of points on the table with three level-two elements (the two Polka sequences and the side by side footwork). They are sitting seventh with 53.70 points.

“We are satisfied with how we skated today,” said Orford. “Although it started off a little shaky in the beginning, we finished very strong. We had a lot of fun this year and we were really lucky to get two Grand Prix right away. It has been a great year for us.”