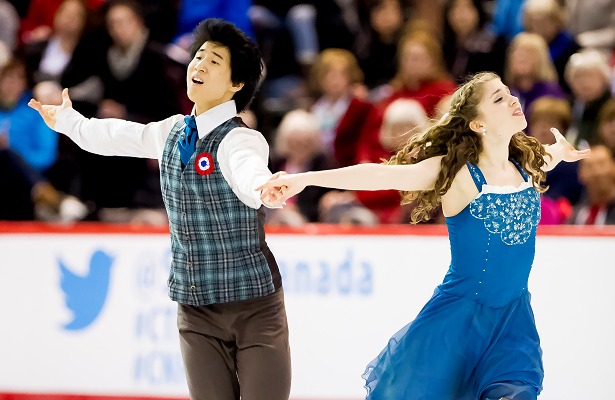 Now, the Vancouver-based team is seeking more: A spot on the Junior Grand Prix Final—which they barely missed last year—and a higher standing at next year’s Junior Worlds.

For this season, it means continuing with a busy hybrid competition schedule that includes junior international competitions and senior domestic competitions.

“Last year we learned a lot and had some great experiences at both levels, so we hope to continue that this year,” said Edwards, 18.

Competing at nationals as seniors last year was an “amazing” experience for the team, especially due to the competitive intensity and increased media coverage of an Olympic season. This year, they are even more determined to make a good impression as a senior team at nationals.

“Watching the Olympics and experiencing the lead-up to the games with some of our training mates made the dream of competing in the Olympics seem a lot more real,” said Pang, 19. “We are definitely training hard to show that we have grown and can skate with the maturity of a senior team.”

“It was something we really enjoyed and we came out with a new mindset,” said Edwards. “Since I was dealing with an Achilles injury at the time, we really focused on trusting our training and enjoying every moment of our program together. That’s something we were able to carry to junior worlds with us—the enjoyment and relaxation, regardless of the pressure to perform.”

The ice dancers, who train with Megan Wing and Aaron Lowe in Burnaby, have been working at a new sports facility next to their rink for off-ice training.

“It’s called ‘Fortius,'” noted Edwards. “We do physio, off-ice training, fitness testing, and have other resources all in one place there. We’re extremely thankful and lucky to have such an amazing support team.”

The 2013 Canadian junior champions feel confident that they belong competing alongside Canada’s best teams, and are excited about showing how much they have developed since last season.

“We want the crowd’s eyes to be drawn to us as we skate,” said Pang. “We want to give them a reason to watch us—whether it’s our speed across the ice, our body movements, or our connection with each other and the music.”

“We have some very different styles of dance compared to the ones we did last year,” added Edwards.

Edwards and Pang plan to showcase their new programs at the BC SummerSkate.

“Our short dances are Samba and Rumba rhythms for junior, and Paso and Flamenco for senior,” Pang offered. “For the free dance, we will be using music from the Italian film ‘Life Is Beautiful.'”

“We went through what seemed like hundreds of beautiful pieces of music, but until we heard this one, they didn’t really ‘fit’,” said Edwards of the free dance. “The pieces we chose are music we really connect to, and I think it’s safe to say that we both love to skate this program.”

“This year we went with something a bit different,” said Wing, regarding the free dance. “It’s softer and more subtle than the big, powerful, and dramatic theme of Les Misérables from last season.”

“Madeline and ZhaoKai wanted to stretch themselves as artists and challenge themselves to develop the refinement required to pull off this year’s free dance,” the coach continued. “It is also a great contrast to the Latin short dance, a style that they have a natural flair for. Having this variety makes training more enjoyable for them as well.”

The team has been working on their edge depth and strength in their footwork sequences, and hope that this will reflect in their marks this year.

“We also feel we’ve improved our speed and power on the ice,” said Edwards, “and we are working to integrate the elements so that they flow well with the program and music.”

“We also try to use our elements to really highlight and reflect the music,” added Pang.

Wing agreed, adding that they have increased the difficulty of some the elements.

“They are attacking them with determination,” noted the coach. “The confidence they gained from their Junior World bronze medal is evident in their skating this year.”

After the BC SummerSkate, the ice dancers will compete again at the Junior Grand Prix in Courchevel, France.