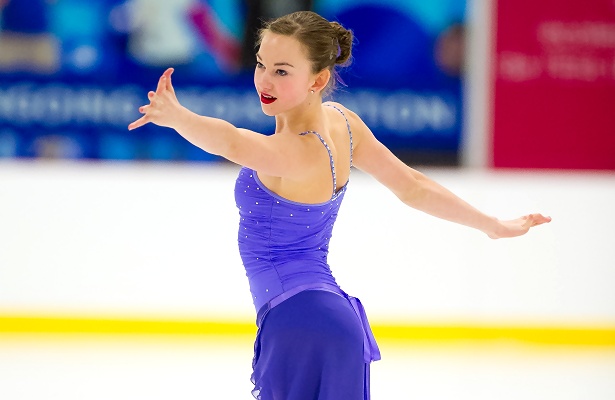 Canada’s Julianne Delaurier made the decision this month to move up to the senior ranks and is hoping for the opportunity to compete alongside her Olympian idols Gabrielle Daleman and Kaetlyn Osmond later this year.

“I love watching them skate and I really look up to them!” said the 16-year-old, who is coached by the husband-and-wife team of Karen and Jason Mongrain. “I’m hoping that I will make it through the Skate Canada Challenge and compete at Canadian nationals.”

Delaurier is still competing as a junior on the international level and recently finished 17th at the Junior Grand Prix (JGP) event in Ljubljana, Slovenia.

“I realize that figure skating has many highs and lows,” said the Canadian junior silver medalist. “This JGP was definitely a low, but I won’t let this rough skate get in the way.”

Nevertheless, Delaurier was happy to watch her fellow Canadian team members compete and see the sights.

“It was very exciting when Brianna Delmaestro and Timothy Lum won the silver medal!” said the teen. “I also loved going to see the castle and walking around downtown with the Canadian team.”

The subpar performances in Slovenia have motivated Delaurier even more, and the skater is back in training to prepare for the upcoming season.

“I’m still working on the consistency of my triple jumps, but I feel that my speed, power and strength has improved since last season,” she said.

The skater has a new short program to music from the Ladies in Lavender soundtrack and is keeping last year’s long to “Flower Duet” from Delibes’ opera Lakmé. Both routines were choreographed by Susie McGrigor.

“I love all the big musical highlights and the way I have to challenge myself to use my entire body movement throughout the whole program,” Delaurier said of the new short.

“At the end of last season, Karen and I felt that her free program music would be a good vehicle for Julianne at the senior level,” said Jason Mongrain. “We are all very fond of the music and think it can still challenge her more in the artistic development.”

“I love the way my long makes me feel like I am floating!” Delaurier added. “The music is light, but still very powerful.”

The skater, who trains in Kelowna, B.C., competed earlier this summer at Glacier Falls.

“My short was decent, but I didn’t have the skate I wanted in the long, but I love going there!” said Delaurier, who has grown three inches since last year. “I like the atmosphere of the competition and it is great to get out of Canada and see what the USA girls are doing. It doesn’t hurt that it is in California either!”

One of Delaurier’s goals in the near future is to work on a triple-triple combination, as well as the triple flip and Lutz.

“Right now, I am focusing on getting my current triples back to where they were,” said the high school junior. “Once those get back to normal, we will start working on the flip and Lutz.”